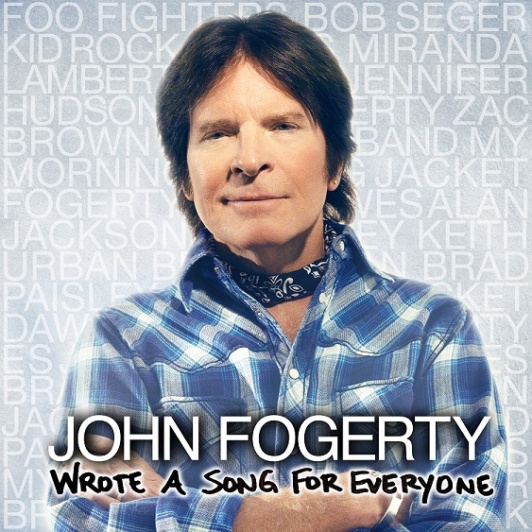 John Fogerty will release his long awaited duets album Wrote A Song For Everyone May 28 on Vanguard Records.

The new record, produced by Fogerty and recorded in Nashville, Los Angeles New Orleans and London, finds him revisiting his classic catalog with his musical friends and admirers; from country acts like Keith Urban and Brad Paisley to rockers like Foo Fighters and My Morning Jacket. Other guests include Bob Seger, Jennifer Hudson, Kid Rock, Zac Brown Band, Alan Jackson, Miranda Lambert and Dawes. Fogerty’s sons Shane and Tyler are also featured, on the track “Lodi.”

“I encouraged each of these artists to come up with their own vision of my song, rather than just redoing what I’d recorded in the past,” the Creedence Clearwater Revival frontman tells us in our latest cover story. “I was hoping they’d have some different twist so it would be fresh, so I’d have to work, too. I wanted it to be something new.”

The Bar Room Prophet Looks Back, & Ahead: A Q&A With John Fogerty

The NFL aired Kid Rock’s collaboration on “Born On The Bayou” during last night’s Super Bowl in New Orleans.

Wrote A Song For Everyone is currently available for pre-order from iTunes and Amazon stores. Fogerty will announce tour dates later this year, including a stop at Austin, Texas’ SXSW.

Wrote a Song for Everyone tracklisting:

5. Wrote a Song for Everyone (with Miranda Lambert feat. Tom Morello)

7. Long As I Can See the Light (with My Morning Jacket)

13. Have You Ever Seen the Rain (with Alan Jackson)