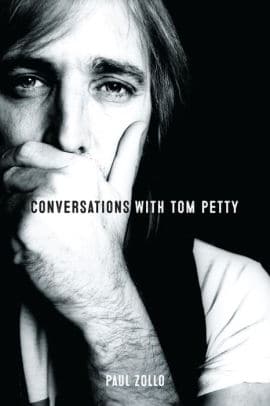 Conversations with Tom Petty, The Expanded Edition, Comes Out Today.


It’s a happy day today, if somewhat bittersweet. It’s publication day, at long last, for the new expanded edition of Conversations with Tom Petty. It’s happy, of course, because I am thrilled that our book is back in the world after having sold out completely back in the darkness of October, 2017, when Tom left to start his new great adventure.

The bittersweet part is simply because he’s not here for it. I’d always envisioned that there would be a new edition of this book someday, and harbored the happy hope of returning to Tom and Dana’s beautiful home by the big ocean to talk music again, and fill in the missing chapters since we finished the book in 2005.  But never had I even considered he wouldn’t be around for the new edition. So there’s that.

But this sorrow for our absent friend is tempered daily by the passionate and timeless power of his music, which I continue to inject directly into my soul as I know all his fans do as well. Those songs which always meant so much to us mean more than ever now.

It’s also tempered by the great and perpetual outpouring of love for Tom, and for his music. I’ve been lucky to get to know so many of the loving citizens of the Tom Petty Nation, his always-expanding fanbase led by the great Keith Eveland, and it’s forever heartwarming to connect with the purity of their love for Tom, which is as authentic as the spirit of his songs.

He was a guy in love with rock and roll, and it’s a love he injected into every song. It was his heart, his passion, his soul, his essence. Like Woody Guthrie, Tom felt the music put out on the airwaves was sacred. Though Tom’s reputation is as the laid-back guy, he was angry a lot when he saw rock & roll get diluted or exploited. Because rock & roll meant everything to him. It was his escape, his dream, his passion, his fire. So his anger – and sorrow – at how the music business diminished artists and their artistry came from a real place, as did all the things he did.

“Integrity in music and art should be respected.“

While discussing his angriest album, The Last DJ, a biting indictment of the industry for cheapening their most valuable resource, he responded to critics who found his defense of purity an expression of bitterness by saying, “I’m not bitter; I’m just sad.”  It was a distinction lost on many. But for Tom this wasn’t about personal bitterness for how his own career was affected. It was genuine sorrow at what he saw as a vulgarization of rock & roll caused by corporate thinking.

“It’s cheaper,” he said, “for the record companies to manufacture artists who aren’t going to make any waves  than to deal with somebody with a point of view and some integrity,” he said. “But integrity in music and art should be respected.”

There’s that purity again. Even in the 1980s when America’s new president was a former movie-star named Reagan and the culture was in flux, he stayed true. Who else then even included the words ‘integrity,’ ‘music’ and ‘art’ together but him?

“Marketing has become more important than product,” he said. Though he chose not to name names, on the record, he had dark disdain for artists with immense success without any musical artistry.

“They’re presented as pop stars,” he said. “And that’s fine. But I wish they weren’t presented as musicians. They’re not. And I think the public is short-changed by that.”

Short-changing the public was not an idea he subscribed to. As we all know well, he truly loved his fans. He cared about them.

Famously, when his record company decided to hike up the price of his LPs a full dollar, he fought againt it. Though it would have meant more money for him, he didn’t want his fans to have to pay more. (Though it seems rather likely all of his fans would have paid the extra buck, and wouldn’t have blamed Tom for the increase.) But that’s not who he was. The man wrote “I Won’t Back Down,” and it was true; he didn’t. But he did presume, wrongly, that some of his peers would join him in the fight. They didn’t.

But that didn’t matter. “The audience sustains us,” he said more than once. That’s what mattered most.

He was all about never cheating his audience. He knew without them he would have no career. Never did he short-change them in any way. Along those lines, he insisted on keeping his concert prices down, against much opposition. But it did frustrate him somewhat, he said, when  Billboard would tally up the highest grossing rock tours, his tours never were at the top of the list. Not because he didn’t sell as many tickets. He did, and often much more. But it was because he didn’t ever want to rip off his fans, and so he kept prices as low as possible, while still bringing in enough to keep the circus rolling from town to town. But to industry insiders, it’s the dollar amount only that truly counts. All that good will and fan love was great, but not really the aim, which was about bringing in the biggest bounty of cash possible.

But that frustration was nothing compared to the genuine joy he felt – and delivered – at those shows. As those devoted Tom Petty Nation fans know well, his life was electrified by rock & roll. It transformed him forever growing up, giving him a mission with meaning.

Rock & roll made all his dreams come true. So to the very end, his gratitude to those who bought the records and came to the shows through the decades, and kept waving his flag, was constant and real.

“You know, you just feel so grateful to all of them,” he said. “You’ve got to love them for being there all this time…I don’t know if everyone realizes it, but these shows, they’re downright frenzied. It’s so loud that sometimes you can’t really do quiet songs. It’s so loud. The audience is so loud sometimes that they can almost drown us out!”

“I’m really grateful to them,” he said. “The live show completely depends on the audience. The more you give us, the more you’re gonna get. I’m just amazed that they’re still there. And that they’re on that kind of level.”

He never felt he was entitled to an audience like the one he garnered. To him, as he said many times, it wasn’t a given. It was a gift.

“And God, what a gift,” he said. “It really does sustain us. You can be so tired on the road. So exhausted. Just whipped beyond belief. Nobody in that audience can picture what you’ve gone through in the last twenty-four hours. Maybe this is your third city in a day, and God knows what’s gone on by the time you’ve hit the stage.

“But when that audience starts up, it really does just lift you up. You forget everything else, and you become involved in this moment. And that’s just pure magic.”

So in honor of that ongoing magic, I’m grateful to Tom – and Dana – for trusting me with this mission. In his tradition, I wanted the new book to be truly expanded, so those fans he cared about most – many of whom have the original – would not feel short-changed. It is seriously expanded, with a beautiful conversation with Dana at the start, and much new material as well as interviews, reviews and more I wrote about him before the book and since.

Thanks forever to all those who have supported this book so lovingly, and for keeping the love alive.