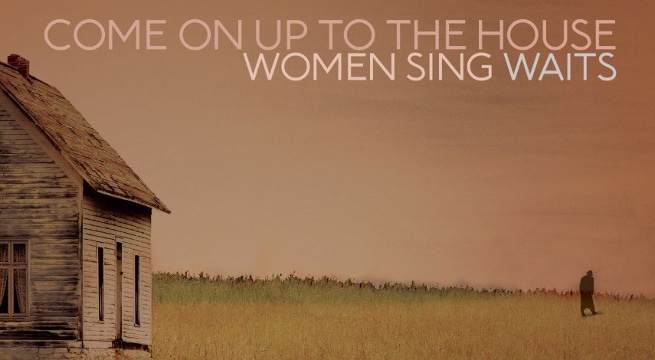 ‘Come On Up To The House: Women Sing Waits’ Is An Exemplary Tribute To Tom Waits

Come on Up to the House: Women Sing Waits | (Dualtone Music Group)

There are songwriters, and then there are storytellers who tap into mundane existence with beautiful specificity. 16 studio albums to his name, released from his 1973 debut, Closing Time, to 2011’s Bad as Me, Tom Waits has painted the world with the gravel in his voice and a pen in his hand. Ahead of his 70th birthday (December 7th), his work has been reinterpreted through the eyes of a slew of women, accomplished in their own right, who elevate the material with majestic marksmanship.

In the liner notes, Zanes offers a heartfelt essay on his relationship with the music, citing his mother’s initial fascination, as she would often return home with the latest vinyl and gather her children around the record player, and how the tribute record took shape. He most notably points to Waits’s stylistic departure in later years, particularly in the mid-’80s, and his feelings of disenchantment with the move. “…He kept writing those songs that burrowed into the broken places inside of us,” he writes. “Waits could regularly deliver that revelation that comes with only the best songs: you may be lonely, but you’re not alone. As the years rolled by, every Waits recording arrived like it had come just in time.”

Women Sing Waits is no different. The 12-song set arrives at a time when the lack of women on radio airwaves and in high-profile opportunities is under severe scrutiny, and thus, it feels as a triumphant, lightning-bottle moment. Even more, the lineup of talent buries their voices deep into the Waits catalog and highlights the songs in ways that have never before been done.

When it came time to piece together the project, Zanes encouraged each singer to bring back a song they wanted to interpret. “And it was always a ballad, something special to them, some song that had been a walking stick as they’d gone through a dark part of the forest,” he notes. “This album is about us telling [Tom] who we think he is, by assembling a collection of recordings in which artists interpret his work.”

Bridgers delivers a gutting, knockout performance on “Georgia Lee” (from 1999’s Mule Variations), excavating the brittle nature of the melody and allowing the lyrics to pour out of her. In similar fashion, Moorer and Lynne approach “Ol’ 55” (from Closing Time) with supple delicacy, hammering the theme of fleeting, youthful romance as “the sun’s coming up,” their voices glistening off one another. Mann’s take with “Hold On” (another Mule Variations recording) is an especially vital moment – the new version quakes with hopeful yearning, clutching on to whatever is left in a slowly dying world.

Corinne Bailey Rae wraps her sweet alto around “Jersey Girl” (1980’s Heartattack and Vine), squeezing everything she has out of the melody with an enveloping charge, and Patty Griffin reimagines “Ruby’s Arms” (Heartattack and Vine) into a orchestra-swept weeper. “I’ll never kiss your lips again or break your heart,” she sings into a downpour of strings. Kat Edmonson later draws even more whimsy out of “You Can Never Hold Back Spring” (2006’s Orphans: Brawlers, Bawlers & Bastards limited edition set).

With “Downtown Train” (1985’s Rain Dogs), Andrews delivers with sharp vocal punches, exchanging the more wistful original into a heavier, bull-dozing performance. The beat still pummels thick and hot, but Andrews supplies a more lonesome fluidity. From Joseph’s magnetic “Come On Up to the House” (Mule Variations) invitation to Cash’s world-weary “Time” (Rain Dogs) to The Wild Reeds casting a more forlorn glow on “Tom Traubert’s Blues” (1976’s Small Change), Come On Up to the House: Women Sing Waits is a beautiful celebration of Waits, personally and professionally. There is nary a dud in the bunch – Angie McMahon and Iris Dement likewise turn in excellent performances on “Take It with Me” and “House Where Nobody Lives,” respectively.

Warren Zanes leaves the reader with a lasting impression, “It all brought me back to the Tom Waits I’d begun to see an outline of as a young man, back to the Waits my mother brought into the family dining room. That strange and beautiful character who seemed to belong to no one. Who I now believe belongs to us all.”