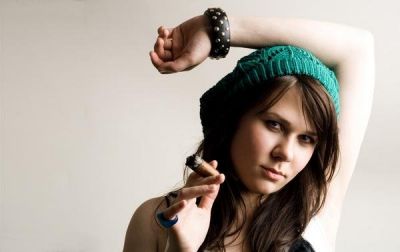 Amy Kuney is a twenty-five year old singer-songwriter based in Los Angeles, California. With a handful of TV cuts under her belt and the attention of contemporaries like Damien Rice and Kate Voegele, Kuney is poised to join the ranks of piano songstress “it”-girls like Regina Spektor and Fiona Apple.

Let’s get to know one another a bit. What’s your full name, where are you from, what’s your birthday, and what’s your favorite 80’s movie?

Amy Kathryn Kuney, I’m from Tulsa, Oklahoma, my birthday is on August 6th and my favorite 80’s movie is 16 Candles (at the moment).

Tell us about your upbringing.

I was brought up in a very conservative Southern Baptist home. My siblings and I were all homeschooled and very sheltered. I wasn’t allowed to listen to ‘secular’ music (anything with drums) until I got to college (although my sister ‘smuggled’ Fiona Apple to me). When I was 13 years old, my family moved to Honduras to start a mission teaching English and home economics. I was, more or less, forced to go… and I still won’t admit this to my parents, but as difficult as it was to move… it was quite possibly the best thing that’s ever happened to me.

How has that shaped who you’ve become as a musician?

It’s shaped everything! I grew up singing in church so hymns really  inspired (and continue to inspire) me. Not being exposed to pop music right away gave me a craving for it… my imagination immediately began “making up” what I wanted to hear.

What was the first instrument you learned how to play?

I began playing piano when I was four years old.

Did you always know you wanted to be a songwriter?

I always knew I wanted to write. English was my favorite subject. I wrote so much (and so well apparently) that my parents sent me to private English classes for my 3rd and 4th grade. They saw it in me before I did. We happened to be in a homeschool group with the Hansons (Yes….’Mmmm-Bop’) and when the Hansons became famous, that’s when I put music/writing together and realized that I wanted to be a songwriter.

The video for “Gasoline Rainbows” is really amazing.  Can you tell us about the idea behind the song/video and your relationship with Global Green?

The whole thing really started with Sophia Bush and Austin Nichols. I’d originally written the song for “Whale Wars” but when the oil spill happened, it (sadly, and eerily) was a perfect song for the situation. Soph and Austin (both activists) heard the song, and threw their energies into a compilation album -with my song as the title track- all proceeds going toward the Oil Spill clean-up. I honestly never dreamed of getting a music video for it so soon. I called my friend Ryan Costa and asked him if we could film ink drops in a fish tank with the lyrics scrolling and he laughed. He said we needed a ‘real’ video for this song and he had a vision for it. Thanks to a gracious supporter – Taggart Productions, we were able to pay for the video and do it right.

What lyrical themes are most present in your music?

Right now, there’s a lot of spiritual warfare, sexual tension, inner strength witha tinge of longing. I’m digging pretty deep with this album. I’m trying to keep the sarcasm (my ‘cover’) out of this one.

It looks different from song to song. One song might take me 45 minutes to write down (melody and all). Some songs take me a year. I sing melody ideas into my phone and when I get a cool song concept I’ll listen through -find a melody to fit the mood. It really depends on my level of creativity that day.

Is there anything in the works for you right now?

I’m finishing up my next album Onyx… soon to be released. I’m working on a side project that’ll be surfacing shortly. When there are so many ways to release content, there’s always something in the works. Haha

What local spots in your town are a must for any cool fellow songwriters stopping in your town? (venues, restaurants, coffee shops, inspirational spots).

The Beach is a must! Versailles cuban food is one of my favorite restaurants, but I also eat a lot of sushi…Izakaya’s spicy tuna on crispy rice (with a jalapeno on top) is to die for.

If you could have any songwriter stop you and tell you they’re a fan of your work, who would it be?

Be sure to check out Gasoline Rainbows, the compilation album to benefit the gulf oil spill featuring Amy’s song as the title track, on iTunes. The album includes tracks by The Black Keys, Vampire Weekend, Phoenix, The National, and others. Get it here: http://bit.ly/gasolinerainbows

For tour dates and more info on Amy, visit www.amykuney.com.