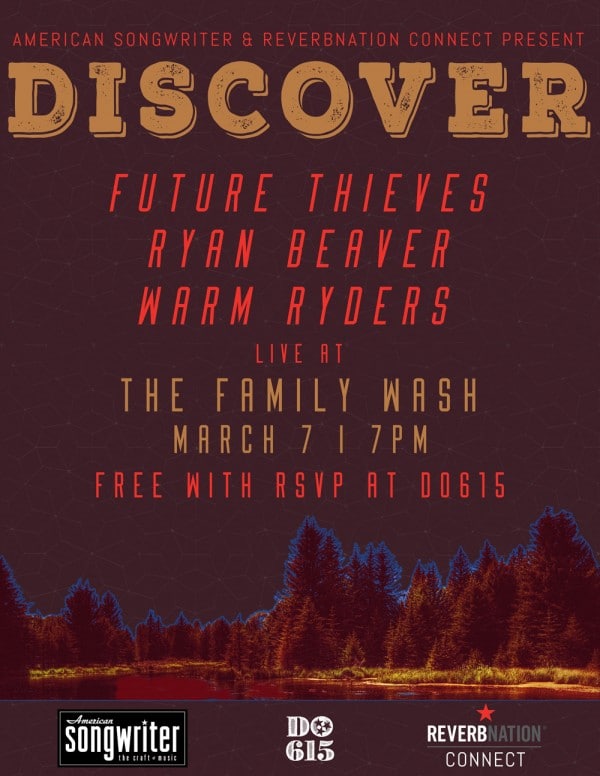 American Songwriter is launching a new concert series with ReverbNation CONNECT called “Discover.” The series, which aims to spotlight emerging artists and bands, will kick off March 7 at The Family Wash in East Nashville.

Nashville artists Future Thieves, Ryan Beaver and Warm Ryders round out the roster for the series premiere, which is free for fans who RSVP at Do615.

The Future Thieves, a Nashville rock and roll band, formed just over two years ago and have already taken the stage at Bonnaroo, Summerfest and Nashville’s Live on the Green festival. Late in 2015, the group dropped its debut album, Horizon Line, a record they made in their basement studio that manages to capture the energy of their live show.

Ryan Beaver is a country-rock singer-songwriter whose forthcoming third album, Rx, drops on May 6. Beaver pushed himself to find what he thought was missing in country music while making the record, and ended up with a sound that mixes country with gritty rock and roll. His music has earned him considerable praise from many in country music, including Lee Ann Womack, whom Beaver is currently supporting on tour in anticipation of Rx’s release. The album is available for pre-order here.


After the breakup of The Apache Relay in fall 2015, Michael “Big Mike” Harris switched his focus to a new group, Warm Ryders, which also features singer-songwriter Evan P. Donohue on lead vocals. The group also consists of fellow Apache Relay member Stephen Smith and Tyler Osmond (formerly of Utah band Desert Noises). The four-piece cites the Eagles as one of their main influences, considering their own sound to be a similar mix of guitar-driven rock and country-roots choruses.