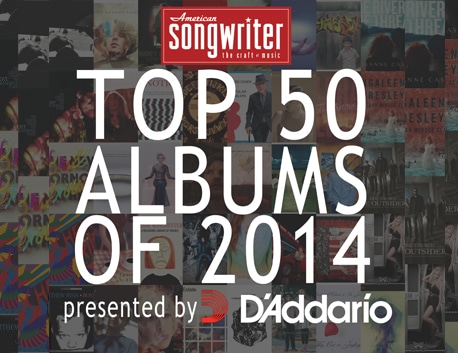 50. Sharon Van Etten: Are We There

In the music video for “Your Love Is Killing Me,” Sharon Van Etten paints a devastating portrait of unrequited love, one that ends with the same kind of quiet shock that has come to be a defining element of Van Etten’s music. As such, she has, over the course of four acclaimed albums, become one of our foremost documentarians of love and all its horrors (and, occasionally, its pleasures), a role she continues to inhabit on her most recent offering Are We There. Van Etten has grown increasingly more ambitious with each release, with Are We There‘s most startling growth manifesting itself in her preternatural confidence, one that previous releases hinted at but never quite fully realized. That degree of conviction renders Van Etten’s already powerful songwriting even more affecting, making Are We There a listening experience rare in both its vulnerability and its certainty, an experience not unlike the roller coaster relationships about which Van Etten so candidly sings. Cooley Songs! More Cooley Songs! A new Drive-By record is always a reason to celebrate, but Mike Cooley contributing six songs after years of letting Patterson Hood take the songwriter-lead is reason to throw an epic rager. Don’t get us wrong — we love Patterson’s songs — but the balance is where it is AT y’all. The tug of war between the styles of Hood and Cooley has always been what’s made the band’s music bristle with energy, and English Oceans find the crew more fired up than they’ve been in years. It’s been a tumultuous 15 years for the Drive-By Truckers — we don’t have the space to accurately recount all the line-up changes — but the band has come out on top, turning in their best outing since the Bush administration. English Oceans is a return to form and reason to be excited for the future. After the release of her 2011 album Tell Me, Jessica Lea Mayfield was ready to quit music altogether. Thankfully, one wedding and one baritone guitar later, Mayfield got back in the ring to record Make My Head Sing, which saw the singer-songwriter take one foot out of the country arena she previously dabbled in and step into the gritty world of grunge. Though some of Mayfield’s signature lyrical complexity was sacrificed to make room for distorted, overdriven guitar solos, the album never feels like it’s missing anything. Make My Head Sing is still equally as honest as Mayfield’s past releases. One of the album’s strongest cuts, “Party Drugs,” explores Mayfield’s days of doing drugs with a loved one: “Party drugs/ I got used to/ Without them I’m bored and tired/ You and me and all this nothing/ It’s sweet, you’ve seen if I’m still breathing.” Which version of The New Pornographers do you prefer? The power-popping, hooks-by-the second collective that captivated audiences on early albums like Twin Cinema and Electric Version? You can hear them on crunching earworms like “Backstairs”, “Fantasy Fools” or the title track to Brill Bruisers, the band’s first new album since 2010’s Together. Or would you rather the contemplative, dreamy balladeers that showed up on Challengers? Check out “Spidyr” or “Wide Eyes.” Brill Bruisers offers a little bit of everything, but the core elements are never far from the fore. A.C. Newman still bedazzles with ear candy even as he bewilders with his lyrics, secondary songwriter Dan Bejar throws curves and sliders to stupefy those getting used to Newman’s heaters, and Neko Case provides as lethal a vocal weapon as any band possesses. With that kind of formula, it really doesn’t matter what direction TNP chooses, because it’s always going to be a memorable journey. Given how explicitly Beck has referred to new album Morning Phase as a companion piece to Sea Change, it’s problematic drawing conclusions about the latest disc without simultaneously reexamining the other. That 2002 record was intentionally sorrowful and largely down-tempo, a drastic break from the hip-hop influenced, crunchy-riff-laden tunes of some earlier releases that attracted so many core fans. It was the purest sort of “breakup album” in the way it successfully translated the feelings derived from that isolating experience as completely universal and common. Morning Phase induces a similar sense of introspection likewise yielded by the songs’ sample-free, acoustic-based progressions, dreamy vocals and interludes of serious-toned strings. Yet, despite achieving a similar mood, the new songs – at least thematically – have an overarching air of hope. Where Sea Change evoked images of Beck overcome with emotion, perhaps pondering things while hiding in a cold room with no windows, Morning Phase conjures visions of an artist emerging from that room knowing that the battle with his feelings was worth it for the wisdom gained. As problematic as it is to objectively appraise any final studio project from a beloved veteran singer/songwriter who recently passed away, it’s easy to hear that the late Jesse Winchester had settled into a superb, comfortable groove in the final chapter of his storied career. Recorded in a period of remission from the cancer that soon returned to end his life, Winchester wraps his honeyed, self-effacing vocals around sweet originals and a few of the doo-wop chestnuts that he loved and whose emotional simplicity clearly inspired him. It’s difficult not to put new songs such as the opening “All That We Have Is Now” into the context of a man who thought he had just gotten a new lease on life. But even removed from that perspective, this album is a lovely, bittersweet and reflective look at life from an artist who left us with a batch of wonderfully crafted albums throughout the decades, all waiting to be rediscovered.

Tarpaper Sky was started in 2010 but delayed due to other projects. Even though it brings back many of the musicians involved in Diamonds & Dirt, it’s not meant as a follow-up. Recording the songs live in the studio shows Crowell’s confidence in his tunes and players, providing a warm, unforced sympathetic feel throughout. The opening laid back mid-tempo rocker “Long Journey Home” makes the album seem like a homecoming as well. While much of the material displays its reflective nature in titles such as “Oh What a Beautiful World,” “Famous Last Words of a Fool in Love” and especially the love lament of “I Wouldn’t Be Me Without You.” Yet swampy bluesy rockers such as “Somebody’s Shadow,” the Chuck Berry riffs that power “Frankie Please” and the frisky rockabilly with stand-up bass of “Jesus Talk to Mama” maintain the musical balance and keep the melancholy mood from dominating. The detailed story of “Grandma Loved that Old Man” is touching and seems autobiographical, but the light Jimmy Buffet tropicalia musical approach and meticulous lyrics that leave nothing to the imagination keep it from fully connecting on a more universal level. When Old Crow Medicine Show released their fifth studio album this past summer, much was made of a certain name gracing the album’s co-writing credits. That name was Bob Dylan, who, after famously providing the initial sketch of the group’s platinum-selling, signature  tune “Wagon Wheel,” gave the group another unfinished lyric for their new record ten years later. That song, “Sweet Amarillo,” is a fine enough tune, but it’s no “Wagon Wheel.” The gentle mid-tempo, campfire sing-along is not even the best track on Remedy, which just may be Old Crow’s most consistent album of their career. Ketch Secor and Critter Fuqua prove that despite being primarily known for their jubilant live act, the Nashville veterans sound best on record when they slow things down. Songs like “Dearly Departed Friend” and “The Warden” show off the group’s penchant for a nuanced, affecting narrative, offering further proof that the group has become one of Americana’s most reliable traditionalists over the last decade and a half. For their first two albums, New Jersey indie rock act Real Estate built a following on breezy, airy rock songs that left the listener with the feeling of just having stepped out of the ocean on the perfect summer day. On Atlas, the atmosphere is still there, but the mood is decidedly less beachy. Lead single “Talking Backwards” sounds jubilant enough, with its swirling, reverb-drenched guitars, but when Martin Courtney sings, “Am I making any sense to you?” it’s quickly apparent this was a song written in a different state of mind than, say, “Pool Swimmers.” The rest of the album follows in the footsteps of “Talking Backwards,” making for a listening experience better suited to trying to forget that beach trip you took with an ex than actually relishing in the sand and surf. This is the sound of a band growing up, yes, but also the sound of one growing into itself, turning growing pains into beautifully crafted music in the process. The opening sequence of piano that begins “Radio Girl,” the first track on Doug Paisley’s third album Strong Feelings, has the kind of sprightly tin-pan-alley feel that might initially lead you to believe you’re listening to one of Randy Newman’s classic ‘70s albums. But it doesn’t take long before a twangy guitar lick takes over, and Paisley’s own earthy baritone comes in to bring everything back down to his warm, albeit melancholy style of alt-country. His third album in six years, and arguably his best, Strong Feelings is a record that feels both of its time and long before it — back to an idealized 1970s when both Neil Young and Gram Parsons were at their career peaks. But Paisley’s aesthetic is his own, whatever stylistic flourishes might remind one of Laurel Canyon heroes, and between “Radio Girl,” “Song My Love Can Sing,” “Our Love” and the rollicking “To and Fro,” he’s assembled a batch of songs both beautiful and rugged.