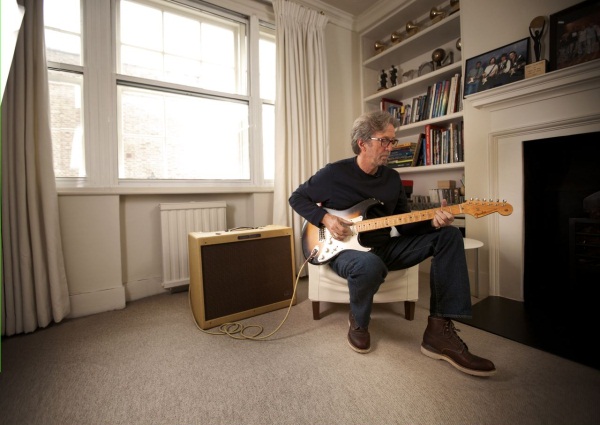 The tones and sounds Eric Clapton has coaxed out of his guitars are legendary: from his heavy blues-based riffs in the ’60s power trio Cream to the weeping moans and wails of unrequited love on the 1970 classic Layla And Other Assorted Love Songs. And let’s not forget some fantastic acoustic fingerpicking over the years, capped by his bittersweet 1992 Grammy Award-winning “Tears In Heaven.” The specific guitars responsible for these sounds – Gibson, Fender and Martin – are just as legendary. But unless your name was Paul Allen and you co-founded Microsoft, chances are you would never get to play anything closely resembling these classic guitars. Next month, however, your chances will improve.

Music retailer Guitar Center, in full partnership and collaboration with the guitarist, unveiled the Eric Clapton Collection yesterday at its Manhattan location. The limited-edition collection will feature five Eric Clapton tribute, replica and signature guitars to be sold in North America exclusively at select Guitar Center locations and online at GuitarCenter.com beginning Mach 21, 2013.

American Songwriter was one of the lucky few invitees on hand to take this royal lineup of guitars for a road test. You’ll still need a pretty solid bank account to call one of these your own but we have to admit . . . Eric has good taste in guitars! 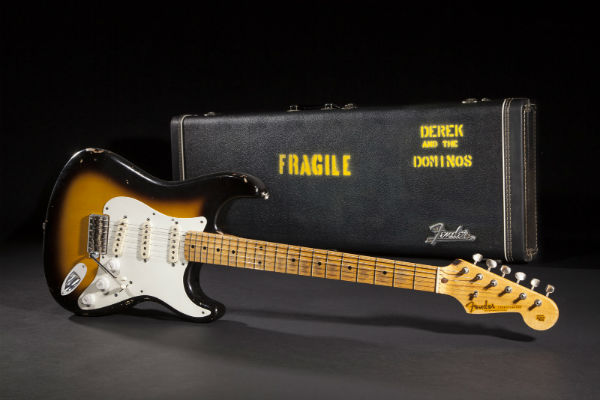 Clapton’s love of the Stratocaster began with ‘50’s rock pioneer Buddy Holly. “(He) played one, and all those records he made, it sounded like it was really quiet. And the tone… he played it like an acoustic guitar a lot of the time.” Growing up in England, the teenaged Clapton’s music palette expanded dramatically when he discovered rural American blues. Watching blues guitar great Buddy Guy play the Strat was a revelation for him. “I went to see him play live and he was bouncing it off the floor, playing it between his legs, behind his head. . . and catching it!”

It wasn’t until 1967, after establishing himself as a guitarist in the Yardbirds and John Mayall’s Bluesbreakers, that Clapton purchased his first Fender Stratocaster, a second-hand model at Sound City in London. Best known as the “Layla Stratocaster” and famously featured on the back cover of that pivotal album, the two-color Sunburst guitar, nicknamed “Brownie,” has a heavily worn maple neck, dated from June 1956. That particular neck appealed to Clapton, as it was similar to the guitars used by both Holly and Guy. ‘We couldn’t get maple necks over in England. Most were rosewood fingerboard. It wasn’t til I hit the States on tour that I started picking them up in pawnshops, and I’d buy 4 or 5 at a time.” Clapton used the guitar for his first solo album Eric Clapton, as well as his stints with Delaney & Bonnie and Derek and the Dominos.

“Brownie” was sold at Clapton’s first guitar auction in June 1999, with a winning bid from Experience Music Project (EMP), led by Paul Allen. The Fender Custom Shop started work on a “Brownie” replica in the summer of 2012, using the original guitar in its current condition as a reference. The project was led by Todd Krause, Senior Master Builder for Eric Clapton’s personal Stratocaster guitars, who reproduced the original guitar to the smallest detail.

Watch Eric reminisce about Brownie in the accompanying video and you can see the bond he has with “Brownie” (and keep in mind he’s playing the replica, not the original which he hasn’t touched since selling at auction in 1999): “When I pick up this guitar, it all comes back to me: doing the Johnny Cash show with Carl Perkins, touring with it in a quartet that was quieter, funky and very strong… all of it hinged on the toughness of this guitar.”

We haven’t played the original of course, but do own several vintage Strats and are pretty knowledgeable of this guitar’s features. Every single tiny detail, no matter how small, is accurately represented inside and out, including the cigarette burn on the headstock and the ultra-cool “Derek and the Dominos” guitar case (see photos). The guitar is of course given the ‘relic’ treatment to match the wear and tear on the original. “We do them as they sit,” says Mike Eldred, Director of the Fender Custom Shop. “Whatever they look like now, that’s how we replicate them.” The efforts paid off in a way that really took us by surprise. It’s one thing for an instrument to look ‘old’ or ‘aged.’ It’s quite another for it to feel and even sound like a completely original 1956 Stratocaster. It has all the raspy, reedy bite and depth of the real thing, and played through a Fender EC Vibro Champ amp, it was effortless to produce the ‘Layla’ tone.

• Offered in a limited edition of 50 domestic and 50 guitars worldwide, the guitar retails for $14,999 msrp. 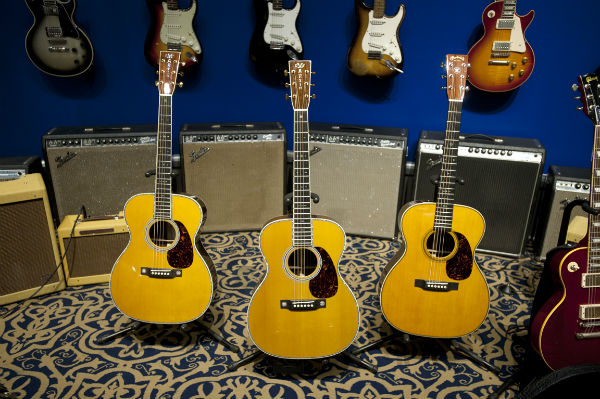 The Martin Eric Clapton “Crossroads” Signature Guitars are a limited edition of three of the finest and most desirable Martin instruments ever made – handcrafted to Eric Clapton’s personal specification by the C.F. Martin Custom Shop. Based on the legendary 14-fret 000 body style first introduced in 1934, these exquisite guitars are uniquely appointed with “Crossroads” pearl inlays and bear the personal, hand-written signatures of Eric Clapton and Chris Martin on both the Certificate Of Authenticity and sound hole label. Constructed from the finest and rarest tone woods, they are available in three versions: a 000-28EC Madagascar Rosewood (on sale March 2013); a 000-45EC Madagascar Rosewood; and a 000-45EC in Brazilian Rosewood. The two 000-45EC models are available for pre-sale via special order effective immediately, with first deliveries starting in March/April 2013.

“Eric wanted to do something different so we went through a bunch of woods and decided to use Madagascar for two of the models” said Craig Yamek, Martin Guitar National Accounts Manager. “It makes for a nice player’s guitar as well as sounding great.”

In this accompanying video, Clapton recalls his aspirations for owning a Martin as a teenager, a guitar he considered “the Holy Grail.” “I had seen Big Bill Broonzy playing a OOO-28 in some footage. I thought ‘I’ll never get there’ but it’s something to aspire to. There were a lot of guitar makers but one that always had the seal of approval from the master musicians was a Martin.”

Next up were the three Martins: two versions of a 000-45, and a 000-28. The interest and curiosity for the OOO series began with 1992’s Unplugged release and has been a boon for Martin since it began production in 1995. Apparently they are crossing the 18,000 mark in numbers of guitars produced, which is staggering.

It is also worth noting that there has not previously been a guitar built with an Eric Clapton endorsement in Martin’s “45” flagship category. Two different types of body wood were used in the construction of each of the OOO-45 models: Madagascar Rosewood and Brazilian Rosewood. Brazilian Rosewood is quite rare and expensive, as evidenced by the extremely high price tag. Both of the OOO-45’s felt the same in terms of neck profile and feel and playability. And all three are simply fantastic guitars, clearly being on ‘another level’ from their other already near-perfect standard production signature model. What amazed me was the unexpected difference in sound between all three. They were all on the highest plateau in terms of Martin guitars and their sound, but this was something else. The woodiness and liveliness is evident in each of them. The 000-28 was smooth and vintage, the 000-45 a bit dark and warm, but the Brazilian version was stunning.

I’ve always been more in the camp of the notion that Brazilian rosewood holds more cosmetic than sonic value. But this guitar had the complex tonality of a piano when played- loud, rich and unbelievably toneful. And the figuring on the back of this instrument was absolutely magnificent. I remarked to several people there that if I owned it, I would have to rotate it in its display stand every day because I’d be compelled to show the back as much as the front. I hope that when his tour is finished, that this particular guitar will find its way into the hands of Eric Clapton; it was not part of his review (see videos) and as impressed as he was with the other two guitars, I think he would be really delighted over the sight and sound of this guitar. 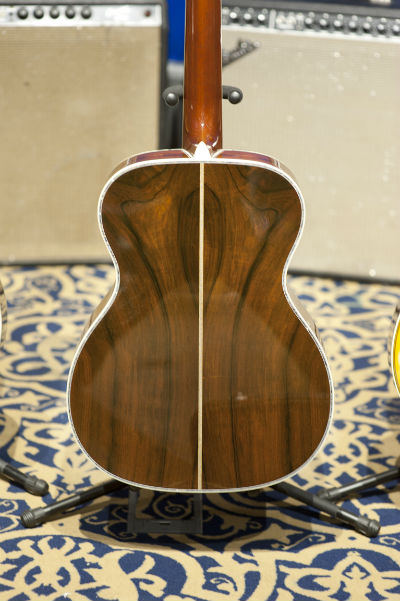 Still owned and cherished by the George Harrison estate, this Gibson Les Paul guitar – originally a 1957 Gold Top, refinished by Gibson in 1967 in “cherry red” – was meticulously measured and inspected by Gibson Custom in 2012, from which a stunning replica was made. A remarkably lightweight mahogany body, unusually slim ‘50s neck (thanks to the refinishing in 1967) and PAF humbuckers make this a great playing Les Paul. Other details authentically recreated include the offset seam on the maple top, along with screw holes for the previously removed Bigsby vibrato and “Custom” truss rod cover.

In collaboration with the George Harrison Estate and Eric Clapton, this historical guitar will be a limited edition of just 100 guitars worldwide, available in America exclusively through Guitar Center in March/April 2013, coinciding with the 2013 Eric Clapton Crossroads Guitar Festival.

“I played Les Paul guitars through my time with John Mayall’s Bluesbreakers and they became a part of my body,” Clapton says. “It’s a nice affirmation when a simple human being like me chooses something and it’s good instinctive choice.”

This guitar is long overdue. The history of this instrument’s contribution to rock and roll is pretty rich: it’s the guitar seen in George Harrison’s hands in the video for “Revolution” in 1968 and the guitar used by Eric that same year on “While My Guitar Gently Weeps.” George also used this guitar on The Beatles’ White Album as well as their Let It Be album and film. Loaned back to Eric in 1973, Eric played the storied guitar again at his comeback Rainbow Concert. This great reissue Les Paul is very striking; the Cherry Red draws you in; it just looks fantastic. The first thing I noticed on picking it up was the surprising lightweight. I always sort of brace myself for the possibility of some Les Paul’s being heavy, especially non-vintage ones. This was quite light which made it immediately feel ‘right’. And it was: true to form neck shape, all the right wear, including replica belt buckle rash on the back which could have been created by either of its two prestigious owners. The headstock looked great as well. The lightweight body of course helped the resonance in the sound. We played it through a Fender Champ and the sound was superb. We can only imagine how it would sound through a Marshall or a Fender Twin turned up.

• The Gibson Harrison Clapton Les Paul will retail for $14,999 msrp.

“We have always admired Eric Clapton as one of the all-time great guitarists, singers and songwriters and for his extraordinary influence on musicians around the world for over 50 years,” said Michael Doyle, Senior Vice President of Guitar Merchandising. “We were honored to be invited by Eric to collaborate with him on this unique collection of guitars which have been the inspirational tools of his trade throughout his career.”

All five guitars represent a triumph for each of the manufacturers and certainly the individual craftsmen that researched, designed and built them. It’s impossible not to be awestruck by the pride that has gone into the duplication, design and manufacturing process of these iconic instruments. 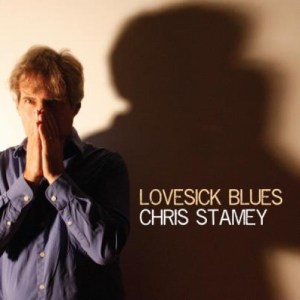 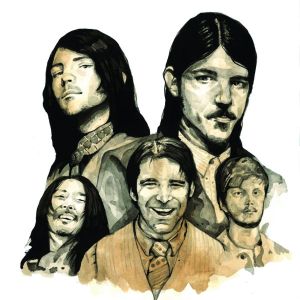