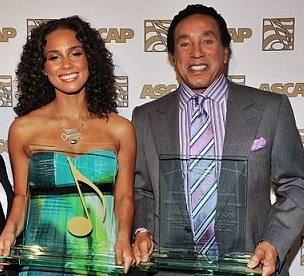 New York, NY, June 26, 2009: The American Society of Composers, Authors and Publishers (ASCAP) hosted its 22nd Annual Rhythm & Soul Music Awards tonight at the Beverly Hilton Hotel in Los Angeles, CA. The star-studded event, which was attended by over 650 leading songwriters, recording artists and music industry notables, paid special tribute to Smokey Robinson and Alicia Keys, and honored the songwriters and publishers of the most performed ASCAP songs on the 2008 R&B/Hip-Hop, Rap and Gospel charts.

Top awards were handed out to:

In addition to the musical tributes to Robinson and Keys, the evening featured performances by Gospel sensation James Fortune (Black Smoke Music/Worldwide) who performed his Top Gospel Song, “I Trust You,” hip-hop group GS Boyz (Battery/Jive/Swagg Team) who had the audience doing their best dance moves to their debut single, “Stanky Legg,” and Def Jam’s newest star, Jeremih, who sang his hit single “Birthday Sex.”

Austin also collected two awards in the R&B/Hip-Hop category for co-writing “Can’t Help But Wait” and “With You” with Stargate.

ASCAP Publisher of the Year honors went to EMI Music Publishing who was honored for 20 award-winning songs. This is the 15 th consecutive win for EMI and the 17 th time in the 22-year history of the awards show that they have received this honor. ASCAP CEO John A. LoFrumento presented the award to EMI Chairman and CEO Roger Faxon and his creative team.

“I Trust You,” co-written by James Fortune and Terence Vaughn, was named Top Gospel Song. Recorded by James Fortune & FIYA, the spiritual anthem topped Billboard’s Hot Gospel Songs chart for a historic 29 weeks, and holds the title as the longest running #1 Gospel single.