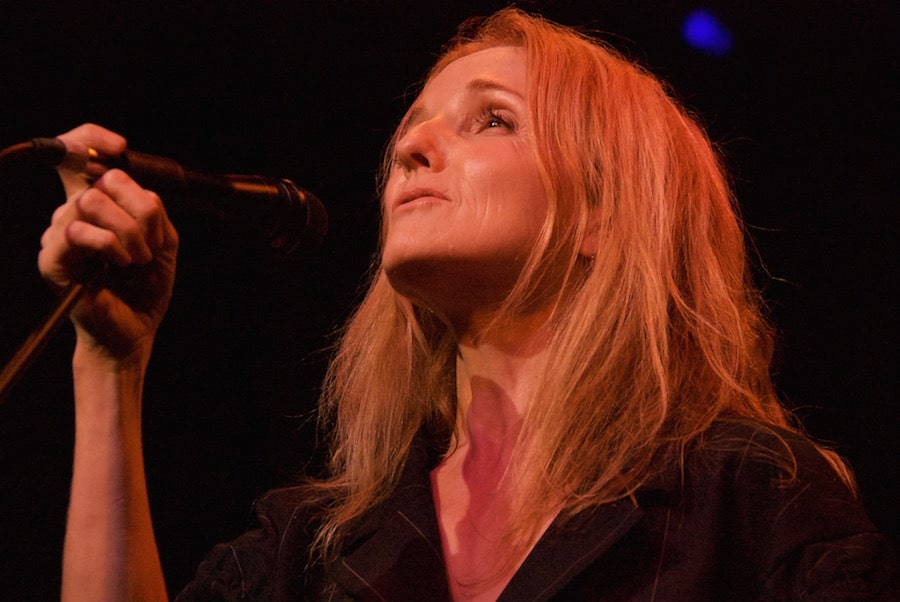 AUSTIN, Texas — When Black Crowes co-founder Chris Robinson asked producer and Bob Dylan guitarist Charlie Sexton to recommend some versatile bass players, Sexton gave him only one name: George Reiff. Reiff tried to turn down Eagles guitarist Joe Walsh’s request to poach him from Ray Wylie Hubbard’s band because they had upcoming gigs and he was the kind of guy who honored his commitments.

On the night of Sunday, Dec. 17, at the Austin club Emo’s, Robinson, Sexton and Hubbard were among more than three dozen performers who honored Reiff for being that kind of guy at a celebration dubbed “Concert for Our George.” The beloved bassist and producer, who passed away from cancer on May 21 at age 56, had touched the lives of countless musicians during his career. In addition to those three, artists he’d recorded and/or toured with who shared songs and memories included the Dixie Chicks/Court Yard Hounds’ Emily Strayer, Patty Griffin, Bruce Robison and Kelly Willis, Ian Moore, Fastball, the Band of Heathens, Billy Harvey, Charlie Mars, Michael Fracasso, Jon Dee Graham and son William, Shinyribs, Beaver Nelson and Cotton Mather. The house bands — there were two, directed by Sexton and Scrappy Jud Newcomb — featured Bukka Allen and Michael Ramos, J.J. Johnson, Stephen Belans, Conrad Choucroun and Mark Patterson. Saxophonist Johnny Reno, bassist Mike “Cornbread” Traylor and drummer Don Harvey also sat in, along with several others.

Robison and Willis duetted on a beautiful Reiff composition sent to them by journalist Peter Blackstock, titled “Unsteady State”; they’d never heard it before, Robison explained, because Reiff had never played any of his originals for them.

In one of many loving anecdotes expressed throughout the night, Hubbard said he told Reiff to accept Walsh’s offer. Though Reiff missed Hubbard’s David Letterman appearance, he wound up onstage with Walsh’s brother-in-law, Ringo Starr — a career pinnacle for a guy who started playing bass because of Paul McCartney. According to Reiff’s brother, Michael, who narrated a video put together by Strayer’s sister and bandmate, Martie Maguire (who was unable to attend), George’s last tour before falling ill was with Walsh.

“George was the consummate sideman,” Michael said in the video. “George understood that role to be his duty to make whoever he was playing with as good as they good be. That was his unique gift as both a player, a producer and a friend, too. He was just as devoted to helping you solve the big problems of your life as he was to helping you make a great record.”

Hubbard noted that, on the albums they did together, only about half of the tracks contain bass. “George would say, ‘This doesn’t need it.’ So he was always thinking about the music more than just ‘Hey, look at me.’”

As Graham stood onstage with his rising-star son, William Harries Graham, he explained that not only was he indebted to Reiff musically, but Reiff had introduced him to the woman who became his wife and William’s mother. After playing a tune titled “Last Night,” the younger Graham said, “That’s a song that I wrote when I was up at M.D. Anderson [Cancer Center] the night that George passed away.”

Before they went onstage, William’s dad was asked if he wanted to offer a comment about his late friend. He declined, because he was afraid he’d start crying again.

Bonnie Whitmore, who, like her sister Eleanor of the Mastersons, had recorded with Reiff, looked heavenward as she played his Fender jazz bass as on a song she’d written for him — the first she’d ever composed on bass. It was titled “George’s Lullaby.”

The night was filled with similarly sweet moments. One highlight was Griffin’s delivery of the gospel song, “Up to the Mountain.”

Griffin said she met Reiff in New Orleans in 1995 when he was a member of Sexton’s Sextet. She was working in a studio, and in walked this band full of cute guys. She became friends with Reiff and Ramos, explaining, “That’s kind of how I ended up here [in Austin]. Because I came to visit them.

“It was a joy being his friend,” she added, before calling out Strayer for a duet on a song of hers that’s a favorite Chicks cover: “Truth No. 2.”

Fastball’s Miles Zuniga said of Reiff, “He was a great hang — which is just as important as being a great musician.”

Before launching into a pretty rendition of the Grateful Dead’s “Brokedown Palace,” the Band of Heathens’ Gordy Quist said Reiff played a really big role in shaping their band, a sentiment Shinyribs’ Kevin Russell echoed.

At Michael Reiff’s request, Sexton played a song from the Charlie Sexton Sextet days, “Everyone Will Crawl.” Then he explained that, shortly after he sent Reiff to Robinson, he got a call. It was Robinson, saying, “Wow, that’s exactly the guy I needed.”

Walking onstage, Robinson said, “There’s one detail you missed in the story. I said ‘I need a bass player’ and you said, ‘I got a bass player, but you’re also gonna get a best friend out of it.’ That’s what you told me.”

Sexton added, “And then Robbie goes, ‘I asked for a bass player and you gave me a brother.’”

That sentiment was often expressed by others Reiff had shared studios and/or road time with, including Jakob Dylan, the Jayhawks, the Tedeschi-Trucks Band, the Mastersons, Ian McLagan, Bob Schneider, Steve Poltz and Joe “King” Carrasco. Reiff’s connection to Rock and Roll Hall of Famer McLagan, who passed away in 2014, was marked by the final song of the night: the Faces’ “Ooh La La,” done as a sing-along following Sexton and Robinson’s dynamic duets on the Beach Boys’ “Sail On Sailor,” Bob Dylan’s “Forever Young” and a particularly soulful version of McCartney’s “Maybe I’m Amazed.”

Afterward, Sexton said, “You’ve seen the amount of people who played tonight, which is a fair amount of people. That’s one-millionth of the people that he affected, not only musically, but … life.

“He changed people’s lives in a way that had nothing to do with music,” Sexton added. “He was truly an amazing person, an inspirational person. Everyone onstage, some of us were truly like the non-blood brothers … but he touched everyone’s lives.”