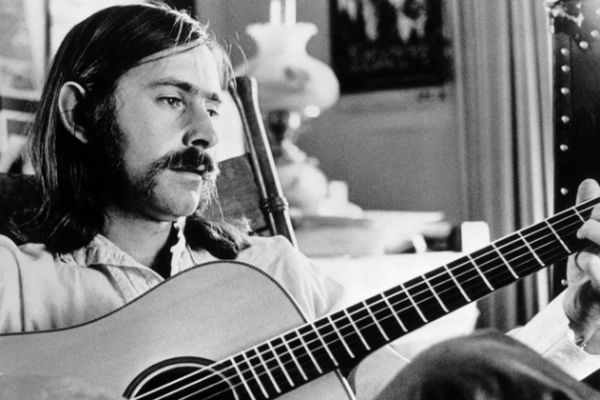 Norman Greenbaum, “Spirit In The Sky” If you’ve always thought Norman Greenbaum’s 1969 hit “Spirit In The Sky” had an immaculate heavenly conception, you’d only be about half right. The actual inspiration came from cowboys and Indians, Porter Wagoner and a fictional preacher.

“I used to watch Porter Wagoner on TV when I lived in L.A., and about halfway through his show, he would always do a gospel-type song, and he sang a song about a preacher who went on vacation,” Greenbaum, 70, said recently from his home in the Bay area. “My credo always was, I can do that.” So Greenbaum, who admits he didn’t have much experience with Christianity, had an inspiration based on Wagoner’s ’68 original,“Pastor’s Absent On Vacation.” Wagoner’s tale concerns an old man’s arduous trek to his house of worship, only to find a sign nailed to the door saying that the church is closed because the pastor is on holiday. It just tears the ole boy up, causing him to wonder aloud if anybody ever heard of Satan taking a vacation and closing the doors of Hell. How could a holy man forsake his tender lambs? He wonders if when it’s his turn he’ll find a notice tacked up on that golden door: “Jesus absent on vacation/heaven closed till his return.”

Greenbaum galloped off into the sunset from there. “Part of that was when you watched westerns way back, the outlaws always wanted to die with their boots on.” So he meshed the cowboy way with some Native American insights. “I had come across a Hopi Indian greeting card that had a totem and a spirit in the sky on it, and that stuck in the back of my head and it all just came together, the Indian part and the Porter Wagoner part.”

But in the process of moseying on up to heaven to meet up with his spirit guide, Greenbaum inadvertently ran afoul of some zealous Christians. “I did take some flack by certain ultra religious, right wing believers that couldn’t believe me, from a Jewish background, would write such a song, was being blasphemous, or did it as a joke,” he says. It was an unusual rock song for that or any time, when the only other mention of Jesus in rock was the Doobie Brothers’ “Jesus Is Just All Right With Me.”

However, it wasn’t the subject matter or the tone that got him the most mail, but part of the lyric.

“I’ve never been a sinner/I’ve never sinned” is what got some of the Christian right howling.

“I did flub it I guess, cause if I was a Christian and was writing from that mindset, I would have said, ‘I’ve been a sinner,’” Greenbaum says. “But since I didn’t have that upbringing, it never occurred to me that it was wrong.”

But some of the artists who have covered the song since then have obviously felt uncomfortable with those lyrics and have adapted them. Even the Kentucky Headhunters changed it to “Yes I’ve been a sinner/ Yes I’ve sinned.” “Yes they did,” Greenbaum acknowledges. “I’ve spoken to one of them. They’re religious.”

The Blind Boys of Alabama, who recorded the song with Charlie Musselwhite on harp and Los Lobos’ David Hidalgo on guitar for ’05’s Atom Bomb and still perform it in their live show changed it to “I’ve been a sinner, you know I’ve sinned.”

And then there’s the over the top psychedelic makeover by England’s Dr. And the Medics that hit number 1 in ’86 on the English rock charts with frontman Clive Jackson in Kabuki makeup looking like a ghoulish version of KISS.

But the most outlandish cover belongs to William Shatner on 2011’s Seeking Major Tom. “Oooh that,”Greenbaum moans. “They wanted me to sing a part on that. I just couldn’t get myself to do it. I thought about it for a coupla months. They kept trying to get me to do it. I just can’t, I can’t fuck up my life. I just can’t do it.”

Although he turned down the offer to perform on record with Shatner and Peter Frampton, the song did pop up again in an unlikely location, to the consternation of family and friends. On a recent visit with his son, who lives in Alaska, he and a group of friends took a flying tour on one of the planes that land on glaciers a mile up on the mountain. “We’re up there in the middle of nowhere, halfway up this mountain, and because I still got this silly streak in me, I said, ‘Aw, man this is just like space!’ I pulled out my I-phone and started playing William Shatner’s version because all I could think of was Star Trek at that point. And everybody says, ‘Norman! Shut that off! You’re ruining our experience.’”

Other than that, Greenbaum’s experiences with “Spirit” have been pleasant ones. He was astute enough to have chosen producer Eric Jacobsen (Lovin’ Spoonful) back in the ’60s, who got him a recording deal with Warner Brothers and with whom he has been partners with ever since. “If you’re asking if I got ripped off like some bands from way back then, the answer is no,” Greenbaum says. “We’ve always had an aboveboard and a very good relationship.”

His song has been featured in more than 50 movies, 15 commercials and several TV shows. “It was a one hit wonder,” Greenbaum says. “Everything kind of fell apart after that, years passed. I played for a long time, then I couldn’t even do that anymore, it was just too weird. Then all of a sudden it got in a movie then it got into another movie, then a commercial, and it keeps going on.” “Spirit” has been recently featured in Lovelace, and on This is the End, rubbing elbows on a soundtrack with Snoop, Funkadelic and Whitney Houston.

It wasn’t just the lyrics that helped the song sell two million copies. Greenbaum came up with an instantly recognizable guitar riff that has stood the test of time, one that can’t be easily duplicated. He didn’t use a pedal for the psychedelic space noise that opens the song. A friend built a fuzz box directly into the body of Greenbaum’s Telecaster, and the guitarist ran it through a vintage tube amp, a Fender Twin Reverb. “And I finger picked,” Greenbaum says, “and that sort of kept the notes ringing a bit more.” He says guitar techies have speculated for years that he flipped the speakers or did some other studio hoodoo, but he says it ain’t so, it was just “a simple little fuzz unit about 3 inches long, stuck a hole in the guitar, put in a switch and battery.” He says its virtually impossible to duplicate the sound of that fuzz box: “Unfortunately, it broke, and he’s not to be found. so it’s like, it’s too bad,” he says with a sarcastic laugh that lets you know he doesn’t think its too bad at all.

Ironically it’s not his lyrics that Greenbaum want to be remembered for. “Without stroking myself too much, I think that I deservedly belong in the top ten of guitar riffs of all times,” he says. “It’s recognizable from note one, and that’s a big accomplishment. People write to me, they’re hanging out at a karaoke or a bar, and they’re a having name that song contest, and people guess it in one note. ‘That’s ‘Spirit In the Sky.’ It’s just a great sound, going from generation to generation.”