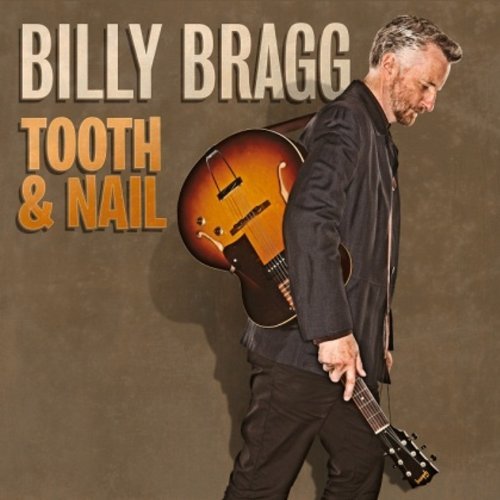 On his first album in five years, Billy Bragg gets back to basics on Tooth and Nail, an album that’s musically stripped to the bare minimum: recorded live, without the “benefit” of overdubs, in less than a week. Real music by real people, in other words.

It’s Bragg’s voice that’s most prominent of course: warm and resonant, but also mournful at times, tinged with regret, that of an old soul looking at the world and shaking his head at its follies. But there’s more on the menu than Bragg’s own political sentiments on this outing. They’re never very far away of course; “What if our ancestors had stayed up in the trees?/Would we still be weighed down by these worries?” he muses in “No One Knows Nothing Anymore” which ponders the ills that plague the world and our inability to deal with them (though if one wanted to nitpick, “no one knows nothing” means everyone knows something). He’s not shy about offering solutions either, reaching into the Bible for advice in the no-nonsense plea “Do Unto Others.”

But love is an equally burning topic on Tooth and Nail in numbers like “Swallow My Pride” (no, not a cover of Green River cover) and “Chasing Rainbows,” a country-flavored lament complete with pedal steel guitar, making the case that even for Bragg there’s life beyond politics. Most importantly, there’s always hope; even as Bragg seems to say farewell to it all in “Goodbye, Goodbye,” the album closes on a more upbeat note in “Tomorrow’s Gonna Be Better Day.” And how will it be better? Bragg’s at his all inclusive, empowering best when he assures the listener, “We’re gonna make it that way.” It’s enough to make you a believer.