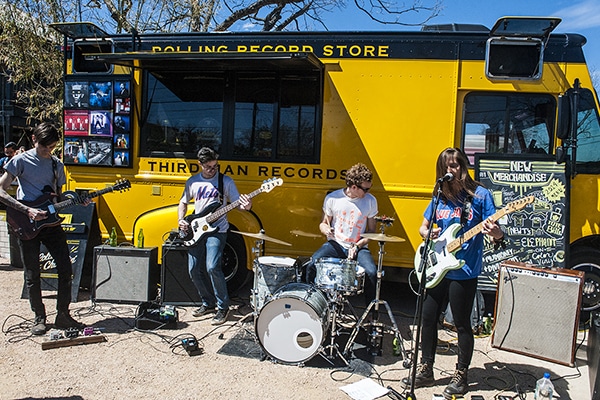 Billy Reid is proud to announce its partnership with Third Man Records to host the Billy Reid/Third Man Records Austin Shindig, presented by K-SWISS. The event will take place on Wednesday, March 18, from 11:30 am – 8 pm at Weather Up, located at 1808 E. Cesar Chavez.

This is the fifth annual Austin Shindig for Billy Reid and media partner American Songwriter Magazine, and the third year the Alabama-based fashion company will return to Weather Up in East Austin. Weather Up provides ideal indoor and outdoor spaces for guests and artists, as well as a top-notch staff that will serve up signature Woodford Reserve cocktails and much more.

Following Wednesday’s showcase, Third Man Records will host the grand opening reception for their installation BLUEPRINTS, an exploration of Paramount Records and the birth of American Music as well as a Third Man Records pop-up shop. BLUEPRINTS will be located in Billy Reid’s Austin retail space at 1122 W. 6th St. The installation serves as a tribute to the music, musicians, and record label that changed the sonic landscape of our country in the early 20th century, and encourages visitors to learn about Paramount Records and interact with the Grammy winning “Cabinet of Wonder” box sets released by Third Man and Revenant Records over the past two years. The grand opening will feature the musical stylings of Up Around The Sun (Tim Kerr and Jerry Hagins), as well as food, drink and merriment and the opportunity to create your own Spirit-o-graph (shadow silhouette!) with Bryce McCloud, the Nashville artist responsible for much of the stunning design of The Rise and Fall of Paramount Records box sets. One of the masterminds behind the Paramount reissues and Revenant Records founder, Dean Blackwood, will also be at the event to discuss the project and answer questions.

BLUEPRINTS will be open to the public from March 12th through May. Hours are Monday through Saturday 10-7, Sunday 12-6. Exclusive records and merchandise will be available the Thursday, Friday, Saturday and Sunday of SXSW, with additional retail surprises and events to follow throughout the life of the installation. Keep an eye on the Third Man Twitter (@thirdmanrecords) for daily updates.

The Third Man Rolling Record Store will be rollin’ and chooglin’ into Austin and making its way around and about the city throughout the festival with limited, RRS-only merchandise, exclusive records, and… live performances! The big yellow truck will begin its journey at the Billy Reid/Third Man Records Austin Shindig and the Blueprints opening, and from there will buzz around Austin hosting some of our favorite up-and-coming bands for short sets. Stay tuned to the Rolling Record Store Twitter page (@thirdmanrrs) for updates and exclusive offerings each day, or eat our dust!