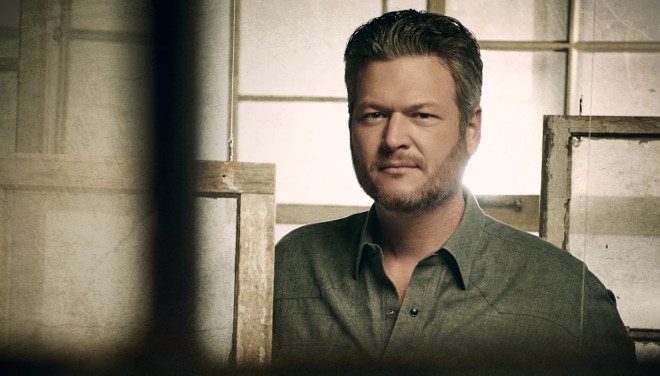 Blake Shelton and Gwen Stefani Team Up for “Nobody But You”

They may play friendly rivals on The Voice, but Blake Shelton and Gwen Stefani take it to a more heartfelt place on their new song “Nobody But You.” The tender duet is one of the five new tracks on Shelton’s upcoming album Fully Loaded: God’s Country, due December 13. Written by Nashville heavy-hitters Ross Copperman, Shane McAnally, Josh Osborne and Tommy Lee James, the song reflects on a life bettered by a loving relationship.

“This was one of those songs where the more I heard it, the more I fell in love with it,” Shelton said. “I also realized how important it is for me and where I am in my life, and I think that’s why Shane was trying to get it to me. It fits my story. I was about to go in and record when I decided that it needed Gwen on it – because it is our song. I think it’s magic.”

The country superstar’s latest single “Hell Right” is currently climbing the airplay charts, and he will make the live performance debut of the “rollicking and righteous” (MusicRow) song December 13 on Ellen. Featuring Trace Adkins, the Top 20 track has garnered more than 43 million streams and almost 350,000 track equivalents. The track will join “Nobody But You” on Fully Loaded: God’s Country, which will also include seven hits from previous albums.

The project’s title track, which was Shelton’s 26th song to reach the top of the country charts, is among the fastest country singles in the past year to reach one million track equivalents. The multi-week No. 1 most recently received a coveted nomination for Best Country Solo Performance at the 62ndGRAMMY Awards after earning the trophy for Single of the Year at the 53rd CMA Awards.

Fans can catch Shelton on the road next year on his “Friends and Heroes 2020” tour beginning Thursday, February 13 in Portland, OR. Special guest Lauren Alaina will join him on the 16-date run in addition to appearances by The Bellamy Brothers, John Anderson and Trace Adkins. The tour will hit major cities throughout the Midwest and West Coast, including a stop at The Forum in Los Angeles (full list below).

0
Legendary singer-songwriter James Taylor is set to release his new album, American Standard on February 28, and will also be the cover story for the March issue of American...
Read more
Best New Music