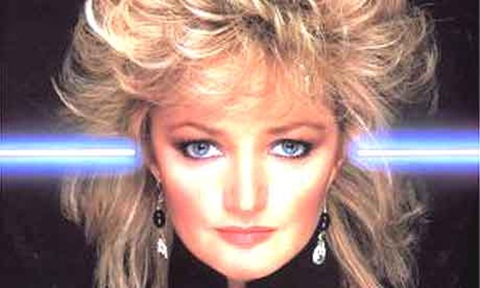 For about a month in 1983, Jim Steinman ruled the music world. The songwriter pulled off the amazing feat of having a pair of his songs recorded by different artists sitting at #1 and #2 on the Billboard pop charts. Clocking in at #2 in October of ’83 was Air Supply’s “Making Love Out Of Nothing At All,” while the top spot belonged to “Total Eclipse Of The Heart,” Steinman’s gloriously over-the-top evocation of romantic torment performed by Welsh chanteuse Bonnie Tyler.

Those who knew Steinman’s role as the writer of Meat Loaf’s biggest hits probably could have spotted his handiwork on these two songs the moment they heard them. All of the ingredients were in place: Swooping piano-driven melodies and elaborate productions, endlessly repeating lyrical phrases and motifs, metaphors so brazen they bordered on insane, and singers emoting as if their hearts were bursting from their chests. Subtle they ain’t, but these two songs made the radio an awful fun place to visit back in the day.

In the case of “Total Eclipse Of The Heart,” even Steinman felt that the song went a little too far for mass consumption. “I never thought it had a prayer as a single,” he told People magazine at the height of the song’s success in ‘83. “It was an aria to me, a Wagnerian-like onslaught of sound and emotion. I wrote it to be a showpiece for her voice.”

Tyler’s voice, famously raspy due to surgery earlier in her life, goes a long way in legitimizing the melodrama inherent in the lyrics. Had she sung with a bit of a wink in her eye or her tongue in her cheek it might have sunk the song. Instead she buys into the outsized emotions and makes us believe every bit of her anguish.

Steinman also produced the song and recruited an all-star band, including guitar hero Rick Derringer and E Streeters Roy Bittan and Max Weinberg, to deliver on an arrangement that plummets and soars to mimic the arc of despair and catharsis traveled by our heroine. Every time Tyler sings, “Every now and then,” she ups the intensity just a little bit, creating the impression that these indignities that she claims are intermittent nuisances are actually battering her more often than not.

Maybe some will scoff that this song and the others in Jim Steinman’s oeuvre trample on restraint and good taste. But what Steinman’s songwriting strategy acknowledged, and what Bonnie Tyler embodied in his magnum opus “Total Eclipse Of The Heart,” is that, when you’re in the deepest throes of a turbulent relationship, sometimes gentility and decorum have no place. Sometimes only a garment-rending, chest-beating, emotionally exhausting ballad will do. You have a problem with that, Bright Eyes?