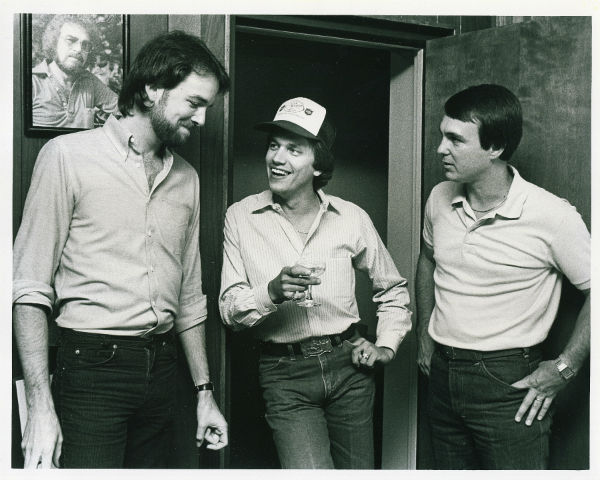 (L-R, Byron Hill, George Strait and Blake Mevis – with the iconic Gene Watson photo looking over Hill’s shoulder – in 1982 at the number one party for “Fool Hearted Memory.” Photo courtesy of the Country Music Foundation)

In terms of songwriters whose contributions to Nashville helped shape the city, the low-key Byron Hill may be the least recognized for having done the most. With well over 600 cuts since the late 1970s, several of them number ones, Hill is also credited with discovering and producing such country stars as Kathy Mattea and Gary Allan. Hill is still active, winning awards as producer for Canadian artist Gord Bamford, and getting cuts on new albums by Teea Goans and Don Williams.

Right now, though, Hill is looking back at an event that changed his life and the life of a young country singer from Texas named George Strait. It was 30 years ago this month that now-living legend Strait had his first number one record, “Fool Hearted Memory,” written by Hill and Strait’s then-producer Blake Mevis. Since that time, Strait has gone on to have more number one singles than anyone in music history, and has never produced anything less than a gold album. And Hill’s career, as one would expect, has been the better for his association with the man who has come to be known as “King George.”

“I’d had cuts by the time we did ‘Fool Hearted Memory,’ but, like George, that was my first number one,” Hill recalled. “It’s really a classic story of a music publisher doing what they’re supposed to do. I was writing for ATV Music and had written a song for a movie called The Exterminator, and the film company came back and wanted another song for a bar scene in a movie called The Soldier. Gerry Teifer, my publisher at ATV, got together with (longtime Nashville music executive) Jim Foglesong at MCA Records, and, along with Blake Mevis, came up with a plan to fill the bill with a song on a rising young artist named George Strait. George was just starting to happen and was very open to the idea of being on a movie soundtrack. The song, which was really going to be pretty insignificant in the scheme of things, turned out to be a lot bigger than the movie.”

“I think it was pretty much a guaranteed single, but we still had to come up with a great song for it to be a single,” Hill continued. “The stars aligned and we wrote a really great song. I’m always careful not to use the word ‘great’ but it really is a great song. But I think it also takes a great artist and a great history to make something really ‘great.’ The song just really fit the situation at the time.”

As far as the demo, it was a no-brainer, especially since the deal was essentially done if Hill and Mevis could deliver the goods. “Blake went home the night we wrote the song and sat down in his kitchen with a TEAC four-track and played rhythm and lead guitar and sang the demo,” Hill said. “We pitched it and George took it to the top from there.” Mevis also continued to have a highly successful career, producing Keith Whitley, Craig Morgan and others.

Hill still treasures the photo that was taken in the lobby of MCA Records at the number one party for Strait’s record. “There we were, in the MCA Records lobby at the number one party, under a picture of Gene Watson who was also on MCA,” he said. “Gene is one of the greatest country singers ever, and George was trying to make it the way Gene had. It was just all so cool. Great history.”

For all his cuts and his relationship with Strait, Hill didn’t have another cut on Strait for some 20 years. He finally got another one with “My Infinite Love” on Strait’s 2003 Honkytonkvillealbum. “I wrote it with Billy Yates and a woman named Annette Grossberg, who gave us the title and the idea,” Hill said. “I never actually met her because she died of cancer shortly after we did the demo. Billy sang it at her funeral.”

Hill said that, before the month is over, there will be a celebration of some sort marking this landmark in his career and the 30thanniversary of what began an unequalled string of hits for any singer of any genre. Hill will definitely be there, but no word yet on whether or not King George will be coming in from Texas for the party.