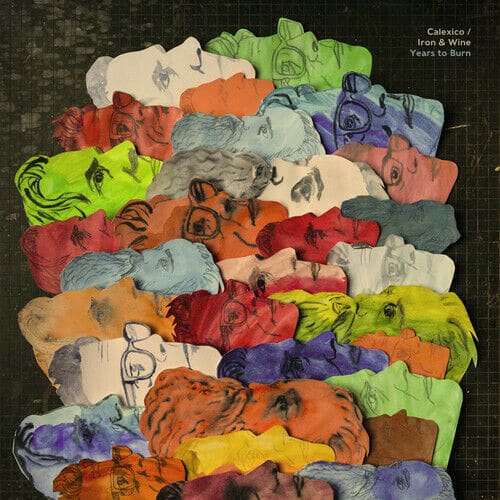 Calexico and Iron & Wine
Years To Burn
(Sub Pop)
Rating: 4 out of 5 stars

Beam wrote most of these pretty melodies; on the almost pop-sounding “Follow The Water,” his rich voice evokes the pleasures and pains of life, love and loss with equal joy. But Burns’ and Convertino’s symphonic and jazz sensibilities share equal time, particularly in the atmospheric “Midnight Sun,” the sonic explorations of “Outside El Paso,” which ebbs and flows like the controlled cacophony of an orchestra tuning, and the album’s centerpiece, “The Bitter Suite.”

From the Spanish-sung duet “Pájaro” (with Valenzuela and Beam harmonizing over layered acoustic guitars, including Steinberg’s nylon-string), it moves into “Evil Eye,” another sonic collage on which wordless vocals emerge through Valenzuela’s trumpet flutters, till he takes over like a conductor, guiding the train as it heads somewhere near Return to Forever jazz-fusion territory. Then it switches into “Tennessee Train,” on which Beam’s gentle vocals echo Burger’s accordion breaths. The postscript pronunciation, “life is bittersweet” (a studio quip from Steinberg), seems to sum up not just the tune (and suite title’s origin), but the album, which ends with the charmingly loose vibe of “In Your Own Time, with its memorable lyrics:

“In your own time we’ll dance in the moonlight/ Smoke like a freight train and fuck like a dog/ Don’t be scared if I tell you I love you/ I’ll be good to you and then I’ll be gone.”