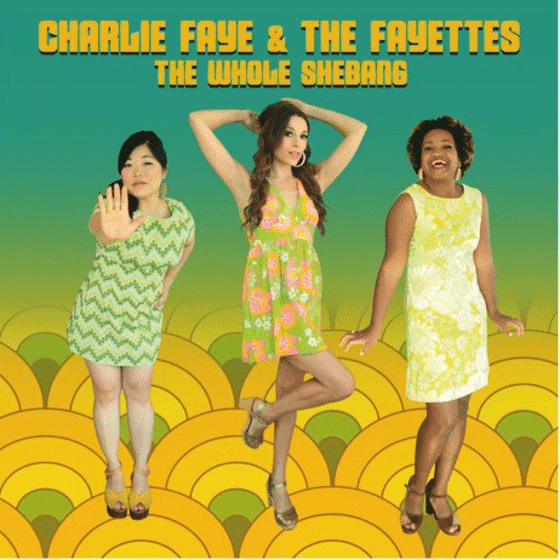 You won’t find many reviews of singer-songwriter Charlie Faye and her duo of backing singers that don’t include the words “retro” and “girl group.” And to Faye’s credit, she wears those descriptions proudly on her sophomore effort.

Those who have seen these women perform know just how much jubilant fun the threesome is. After 2016’s successful debut put them on the map, the trio coalesces around their day-glo ‘60s, now slightly edging into ‘70s, sound with fizzy authority. Sure, some of this feels a little too close to the soundtrack to Grease. But the songs are so well constructed, and producer/multi-instrumentalist Eric Holden’s — whose invaluable contributions should qualify him as a fourth member — reworking of Motown/Phil Spector/Dusty Springfield-era tropes are so convincing, you’ll ignore the origin of these riffs and melodies and just go with the flow.

Fayettes BettySoo and Akina Adderley provide pleasant if generic doo-wop-py background vocals, but like many of the girl groups they emulate, they are pretty much faceless support for Faye’s innocent, carbonated lead vocals. Live, though, the Fayettes provide syncopated dance moves that help make this act so enjoyable.

There’s little of substance happening lyrically (did we really need another song titled “Tonight’s The Night”? even if this one is more overtly sexy than others), but that’s beside the point. Anyone who can make it through 35 minutes of Faye and her band’s sweet and sparkling originals without breaking out in a goofy grin has probably been beaten down by watching too much world news.

Holden’s superb, fine-tuned production adds strings, baritone guitar and tons of reverb to the thumping ballad “The Cream Rises To The Top” and injects horns for the smooth Chicago and Philly soul of “Riding High” without breaking a sweat. The key to why this tasty aural popcorn works is that no one involved is trying too hard. Everything from the sound to the songwriting feels natural, organic, and effortless as opposed to resorting to a Rocky Horror Show parody.

It’s as frothy, fluffy, and sugary as a musical cream puff. Yet sometimes those empty calories are what you need to bring a little breezy pleasure into our frustratingly divisive world. Pushing play on The Whole Shebang to disconnect into a more innocent time is just what the doctor ordered.