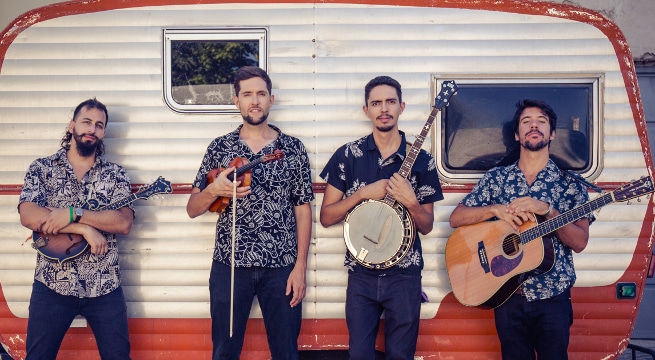 Acclaimed Latingrass band Che Apalache have released the official music video for their lead single, “The Dreamer,” off their new album Rearrange My Heart.

The video was inspired by the life story of Moises Serrano, a noted activist from North Carolina. Serrano’s also the subject of the song and a friend of Che Apalache band leader Joe Troop. Born in Mexico, and brought to the United States as an infant, Serrano grew up in Yadkin County, North Carolina. Troop and Serrano bonded early on over their shared North Carolina roots, as well as the struggles both encountered as queer activists in the rural South.

“The Dreamer” speaks directly to the experience of DACA recipients in the United States, a heated debate that the Supreme Court is currently hearing arguments on in Washington, D.C.

Joe Troop weighed in on the situation from a human perspective, inclusive of Serrano.

“Up on Capitol Hill, the fate of 700,000 people is being discussed by nine very powerful people in funny robes,” he said. “One of those 700,000 people is named Moises Serrano, and he’s every bit as much of a North Carolinian as me, regardless of what those 9 people decide. Children brought to the US that grew up here deserve a pathway to citizenship, far more than what DACA offers them.

“Remember, DACA is a compromise! And now, even that is potentially going to be rescinded? What a sick and twisted system, where children are subject to such a level of scrutiny. Let’s hope those nine powerful people are decent human beings, even though hoping such things these days seems naive.”

The video is a powerful statement of love and courage in the face of systemic oppression, a moving tribute to Serrano and the countless undocumented immigrants who have built their lives in this country.

Based on Serrano’s story, the video also weaves in elements of true stories of undocumented families in North Carolina who have been torn apart by deportation. Serrano was the subject of the recent documentary Forbidden: Undocumented and Queer in Rural America and is a noted undocumented activist and storyteller in his home state, working for immigration reform and human rights. With the US Supreme Court about to hear arguments on DACA cases, the topic of immigration is foremost on many people’s minds.