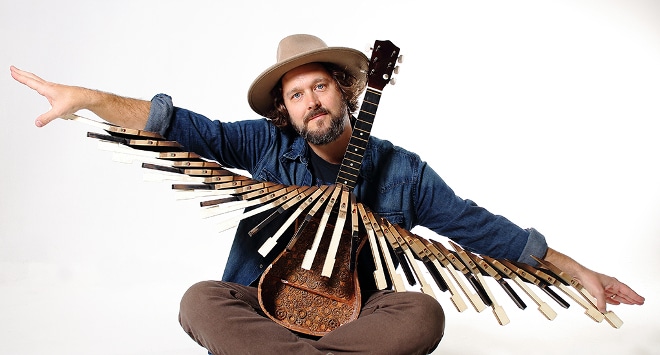 Folk singer-songwriter Cody Diehkoff, AKA Chicago Farmer, thought he might have earned a small fortune in royalties when his song ‘Everybody In This Town’ hit 10,000 plays on TouchTunes Jukeboxes.

“Admittedly I knew that 9,800 of them were from my hometown bar, but hey, 10,000 is 10,000,” Diehkoff tells American Songwriter. “I thought that was a nice big round number so I took my wife out to dinner with all of the fixins. Appetizers, entrees, dessert, top shelf drinks… we painted the town and I racked up a pretty nice credit card bill. The following week I received the check from TouchTunes and it was for $11 dollars.”

This tale of high hopes and low returns is at the center of Chicago Farmer’s new song, “All In One Place,” an outlaw country number that resounds with heart and humor. The song–premiering today on American Songwriter–is the first single off Chicago Farmer’s upcoming album Flyover Country, featuring celebrated Texas rock and roll outfit The Band of Heathens.

“My songs often deal with the themes of frustration and struggle, whether mine or others,” says Diehkoff. “When many folks get thrown curveballs they often hit walls, drugs, or the bottle. I’ve hit all of those things in the past but these days I’m fortunate to be able to hit the guitar and the notebook instead. [This song is] a nod to all who are getting paid less than what they’re worth.”

Chicago Farmer has spent the last two decades writing and performing as a solo artist, but in The Band of Heathens—consisting of Ed Jurdi, Gordy Quist, Trevor Nelson, Richard Millsap, and Jesse Wilson—Diehkoff found natural collaborators.

Diehkoff met the band when he opened for a few their tour dates, and eventually recorded Flyover Country at their studio, The Finishing School, in Austin, Texas. The album was produced by Gordi, Quist, and Chicago Farmer, and mixed and engineered by Chris Harden, a longtime Chicago Farmer collaborator who’s helped craft each of Diehkoff’s previous five releases (2018’s Quarter Past Tonight, 2016’s Midwest Side Stories, 2015’s Man Without A Heart, 2013’s Backenforth IL, and 2011’s Somthin’ Else).

Musically, Diehkoff draws inspiration from Americana and folk icons such as John Prine, Woody Guthrie, and Hank Williams (the only track on Flyover Country not written by Diehkoff is a cover of Williams’ “Ramblin’ Man”). Still, he credits The Heathens for making this album what it is.

“On this album The Heathens really helped me put my poetry in motion,” says Diehkoff, who will be touring with a band of his own in 2020.

“When the songs or poetry call for something, you really have to listen as they know best. Chicago Farmer & The Fieldnotes will be doing an extensive release tour beginning in February and I’m looking forward to seeing folks reactions to the new album and show. It’s just like my solo show really, just louder.”