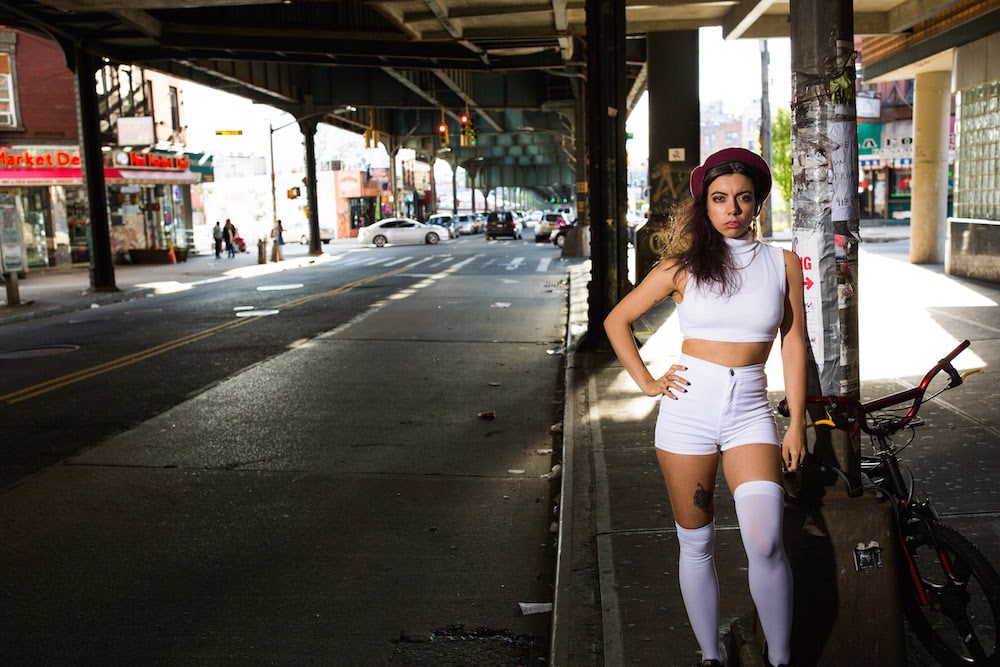 Creating “Navita”: A Q&A with Alynda Lee Segarra of Hurray For The Riff Raff

Alynda Lee Segarra of Hurray For The Riff Raff introduced American Songwriter to The Navigator and its star, Navita, at a bar in New Orleans over Mardi Gras.

She’s among us in the lands of Americana, this Navita Melagros Negrón, a little girl much tougher than her age and the protagonist of this new collection of songs from Hurray For The Riff Raff. Witnessing death on city streets, Navita searches for a lost family and finds her familiar neighborhoods razed and replaced with high rises and resort parking lots.

The Navigator is the latest in a string of recent politically charged concept albums to be released in the past year, including American Band by the Drive-By Truckers and We The People by A Tribe Called Quest. But Segarra takes a different approach from her contemporaries, using a “comic book superhero” to drive this compelling narrative album.

Throughout the conversation, Segarra shares the myriad artistic influences that created Navita. She also discusses her Puerto Rican roots, patriotism, poetry and politics.

Did you grow up in a Puerto Rican neighborhood in the Bronx?

It was very mixed. Irish, Jewish, a lot of Muslim people. Dominican and African American. Everybody.

You visited Puerto Rico over the past couple years making this record?

In the song “Pa’Lante,” I hear Nuyorican poet, Pedro Pietre, in there. Is this you getting back to your Puerto Rican roots?

Yeah, we sample him — that’s Pedro Pietre speaking from his poem, “Puerto Rican Obituary,” that I read when I was in high school.

So you were exposed to Pietre as a kid, not from recent research.

Oh yeah, because I was very into Beatnik poetry when I was in high school.

I loved Allen Ginsberg! I loved anything that was gritty and just dark and about the underbelly of the city. That’s what I lived for. So when I read that particular poem, I was like, this is my experience. This is what it looked like in my neighborhood, what my neighbors looked like and family went through. It also helped me feel connected to my parents and their experience. It was this little peak into … “This is your lineage. This is where you come from.” It opened my mind a little bit, but I went back to thinking I don’t know much about that world and that culture and that I didn’t belong to it. So I did a lot of work and research trying to find how I fit into this history. What is my place in this lineage?

Was this recent research on your lineage?

Yeah, over that last two years, I’d say, working on this album. There’s been so much news of the debt crisis in Puerto Rico. I think it’s something New Orleanians can identify with — seeing on the news your city or your people being presented as having “a lack of.” After the storm [Katrina] the news was about the devastation and “the lack,” about it being a very poor place. And that really affects you. Yes, we have suffered, but we’re still a people rich in culture. So that’s what I felt when I see the focus on the debt crisis. Yes, this place is suffering, but I’d love to represent Puerto Rican people in another way that’s strong and rich.

Is that what you’re doing with your character, Navi?

Navi, yeah, Navita. That’s where she comes in.

Navita starts out in the city because we hear the trains, but where does she end up?

In this futuristic world [laughs], which was really fun to come up with. I listened to Bowie’s Ziggy Stardust and was like, whoa, I want to come up with something crazy. I remember telling people about the idea two years ago and they would kind of blink, and be like, “Uh, okay?” But Navi is a superhero. She’s like a comic book heroine. I liked giving power to this little street kid. She’s rebellious and crazy and full of emotion. We start out and she’s in the city. Although she loves the realness of the city, she feels like she wants more space, more ability in society. She feels trapped in her environment and where she came from. She wants to wake up and not recognize where she is. It’s very Wizard of Oz, like, “Get me out of here, I want to be my own person.”

She gets her wish, but it’s the same city and it’s been gentrified, very intensely, in like forty years. All of a sudden she’s in the same city and cannot recognize anything. All of her people, her Puerto Rican people, are gone. So she has to go on this journey to find out where all the people in her neighborhood go, where did her neighbors’ children go, where did our history and culture go? They’ve been erased from history and she needs to find them, her duty is to remember for them and [say], “I remember so-and-so who ran this bodega, I remember the beauty in everyday life.” So that’s her role.

I’d love to. It’s such a good way to inspire kids. There’s this guy Seth Tobocman who did a lot of political graphic novels when I was a kid about the Lower East Side. He wrote this book called, You Don’t Have To Fuck People Over To Survive, and that changed me as a kid. Also, he wrote a history of the Lower East Side because he wanted to capture the history he saw with people squatting in abandoned buildings and people getting kicked out of the neighborhood. It really affected me because it’s a way for people to learn without being pretentious. We don’t gotta — everybody can talk about this. Look, I didn’t finish high school, but I still know about my history and my people. So I love that, comic books can open up learning to more people.

Your aunt and uncle, Puerto Rican immigrants, raised you. What are some of the family traditions they passed down?

They were very big on family gatherings. We always rallied around my grandmother. She died last year, my last living grandparent. She was the matriarch. She died with all of us in the hospital. We all were there. She had eight kids and they were all there. It was very beautiful. It was hard. She was 94 and lived an amazing life. We gathered around her so many times. We ate her food. So much great Puerto Rican food that I’m terrible at cooking, but I love it. So there was a lot of gathering and rallying around this very powerful woman. That really affected me growing up — this woman came to the mainland with nothing and all these kids. My grandfather was already here working as a construction worker. They came and just made it happen. They came during a snow storm. They’d never seen snow before. She shows up and says, “Okay, gotta make a future for my kids.” So that really affected me seeing everyone being so respectful to this woman, and it being totally okay and celebrated to be a strong women.

Also, they instilled in me this feeling of making the family proud. When you accomplish something, you’re accomplishing it for all of us. So that was hard for me when I ran away. I knew I was on a journey but I didn’t want to blemish the family history. Even though I left, I had an idea that I’m not going to do you guys wrong, I’m not going to set us backwards. That’s the immigrant experience, you can’t go back, you gotta go forward. But that was an important moment for me sitting with her, I thanked her, “Thank you for everything you did. Everything you did made my life possible.” This woman is the reason I’m here. That really informed the album. I dedicated it to all my grandparents wanting to heal wounds they might’ve had.