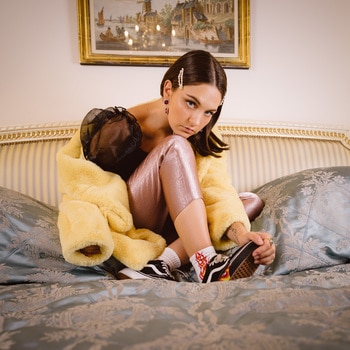 Directed by Chloe de Brito, the video follows a seventies-style title card with visuals that evoke the earthy and entrancing nostalgic spirit of classic fantasy from the golden age of maverick filmmaking. Grainy camera captures the magic of lush forests and rolling hills as CXLOE lithely dances and sings styled in Boho chic. She immediately entrances as the track levitates from glitchy production wizardry into a gorgeous and glorious refrain.

Co-written by CXLOE and Michael Pollack [Maroon5, Jonas Brothers] and produced by MAG [Bebe Rehxa, Zara Larsson, Astrid S] and Louis Schoorl [5SOS], “Devil You Don’t” instantly enchanted audiences and critics. In under a month, it’s closing in on 1 million streams. INTERNS named it among “12 Songs You Need To Hear This Week,” going on to write, “The chorus on this one might be her finest yet,” while EUPHORIA raved, “Looking for your next dark pop fix? CXLOE is serving it in spades.”

Wrapping up a stunning year, it paves the way for big plans and new music in 2020. For now, fall under the spell of “Devil You Don’t” and CXLOE.

Maintaining a rush of momentum from critical acclaim, rising streams, and a growing profile, “Devil You Don’t” added one more dark-pop anthem to CXLOE’s 2019 discography, “SICK” feat. gnash, “Low Blow,” and “I Can’t Have Nice Things” and continues to build on the success of her 2018 breakthrough “Show You.” Altogether, CXLOE’s previous singles garnered over 22 million streams and debuted on a combined 49 New Music Friday playlists.

0
Well, home, they say, is where the heart is. That old adage dates back centuries and rings truer today than ever. Los...
Read more
Best New Music

0
In the 1960s, an activist folk singer-songwriter named Phil Ochs wrote, “one good song with a message can bring a point more deeply to...
Read more