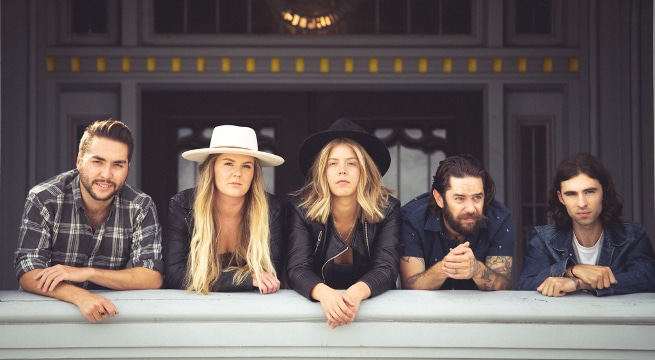 The song premiered exclusively via The Boot earlier this week.  “Long Haul” is the first song to be released from the band’s debut album, which is due out in early 2020.

“It’s about finding something or someone that makes you feel so content and happy, it’s vulnerable to name and be outspoken about what or who you love. This song, to me is about capturing that boldness.” Hillary Grace told The Boot.

The family quilt of Americana music is long and well worn. With stitches that took hold hundreds of years ago, the legacy of forlorn lyrics sung over spare, twinkling instrumentation depicting long nights, whiskey glasses and love that too often walks out the door extends further than any can remember. And it will continue well past anyone kicking up mud today. But with each passing sunset, we can see new patches added to the legacy. And the next name to be sewn in is FRETLAND.

The Snohomish, Washington-based, sister-fronted band plays songs that dash over hills, harmonize with the breeze and coax honey from tall trees. Founded by lead singer Hillary Grace Fretland, the group also includes the tasteful Jake Haber and subtle Luke Francis on bass and guitar and thumping Kenny Bates on drums, as well as Hillary’s sister Kara Belle Fretland on vocals.

FRETLAND’s self-titled, 11-track debut album, which is due out in early 2020, includes the epic, “Long Haul,” reflective, “Have Another Beer,” and revelrous, “Friendly Fire.” While still a new group, FRETLAND has accomplished much. The sisters, who have been singing together since 2008, worked with sonic stalwarts on their first full length, including engineer Nich Wilbur (Angel Olsen, Black Belt Eagle Scout), mixing artist Trevor Spencer (Father John Misty, Fleet Foxes) and mastering expert Ed Brooks.

The band, rife with energy and momentum, has already created one of those strong foundations that allow for a long story to unfold in great detail and with much revelation.