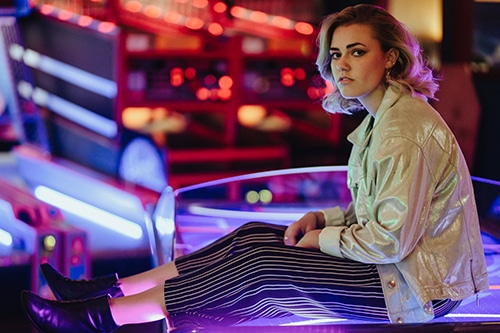 Being from the Western hills of Northern Virginia may have influenced the songwriting of Maggie Miles, the rural outposts did not define her sound. There is obvious inspiration from Stevie Nicks and Ann Wilson but delivered with a funk pop groove that makes for a fun experience is much more her speed.

Miles recently released her track “Shiver” — which showcased her songwriting as well as multi-instrumental talent. She told American Songwriter that the reaction has been really cool, if not somewhat unexpected.

“When writing a song that is a response to loneliness and confusion, you never think it will be shared with others in such a public way. But, hearing from listening that it has encouraged them is a priceless thing, and it makes me want to keep going,” she said. “To create art that makes people come together is what music is all about”..

Many of Miles’ tracks attempt to address the conflicts of life with painfully aware lyrics that blend with a beat that is hard to ignore. It often paints a compelling and complicated picture of an imperfect existence.

The 20-year-old performer is about to have a very busy 2020 as she is set to begin a tour with Indie rock band, Secondhand Sound, drop three singles in support of a new album, and then do a media blitz prior to announcing summer plans.