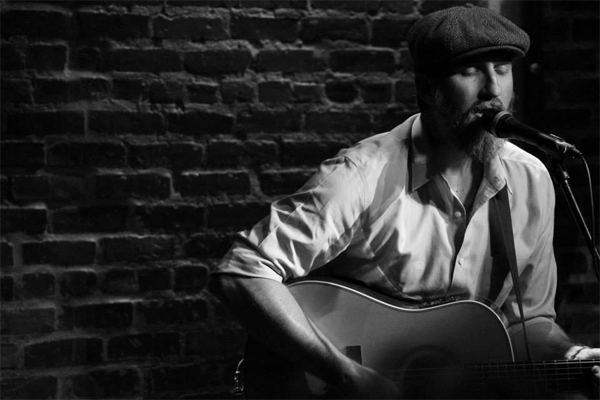 AMBITIONS: To create something timeless.

TURN-OFFS: The woman who talks loudly on her cell phone on the street outside my bedroom window at 3am.  Anyone who introduces their song at a show by telling people how it was placed in a movie or TV episode.

TURN-ONS: Songs with substance, people with patience, strong coffee, nature, anyone who can dunk a basketball, people who can listen to a song all the way through without talking, anyone willing to be brave and bold in the face of doubt, my wife.

STARTED PLAYING MUSIC:  When I was 8 years old, my parents bought me a black Squire Bullet guitar that I had been staring at in the window every time we passed by Mr. B’s Music Shop.  Despite dreams of total rock domination, I took four lessons and quit because it was too hard and made my fingers hurt.  It wasn’t until seven years later that I dusted off my old guitar and began teaching myself how to play from Wolf Marshall books and Guitar Player Magazine.  As soon as I could strum a few chords I felt compelled to write songs.  I was always more interested in creating something of my own than learning someone else’s song note for note.  That’s not to say I haven’t learned a lot of other people’s songs.  You can learn a great deal from figuring out how to play another person’s tune.

FAVORITE LYRIC: Hard to decide, but here are a few…

“I’m liberal, but to a degree, I want everybody to be free.”  -Bob Dylan

“The older I get, the less I know and the more I dream.” -Oliver Wood (The Wood Brothers)

“Losing love is like a window in your heart.  Everybody sees you’re blown apart.” -Paul Simon

“Every time I pin down what I think I want it slips away.” Rivers Cuomo (Weezer)

SONG I WISH I WROTE: Thunder Road by Bruce Springsteen, Penny Lane by The Beatles, Hearts and Bones by Paul Simon

5 PEOPLE I’D MOST LIKE TO HAVE DINNER WITH:  John, George, Paul, Ringo, and Grandma Lucy (she died before I was born)

MY FAVORITE CONCERT EXPERIENCE: In 2001 I played the side stage at Farm Aid, Indianapolis, with my band at the time, Three Minute Mile.  We got VIP back stage passes and access to the front row and I saw Neil Young, Willie Nelson, John Mellencamp, Dave Matthews, and the Doobie Brothers put on amazing shows from about four feet away.  Neil really blew me away.  He was on fire.  I also got to meet Dave Matthews and hang out with one of the guitarists from The Doobie Brothers backstage.  Not a bad day.

I WROTE THIS SONG: On a ukulele.  To this day I still wonder if I should have recorded it that way.  At its core it’s about growing up and finding your way.  The last verse is vaguely about how I met my wife when we were both very young.  Seventh grade, actually.  I’ve taught music to middle schoolers. and it’s great to freak them out by reminding them that they might be sitting next to their future husband or wife.  You never know…

MOST EXCITING THING I’VE EVER DONE: I lived a year of my life in Chicago, and when I left I drove solo across the country to Los Angeles via New York, Washington DC, Pittsburgh, Denver, and Phoenix seeing family and old friends.  A lot of soul searching and amazing experiences were wrapped into that month.  Also, my old Saturn SL2 shook violently any time I drove faster than 55 mph, which added to the excitement.

0
The song is the second single from Shadows, who has yet to release a full-length record.
Read more
Daily Discovery