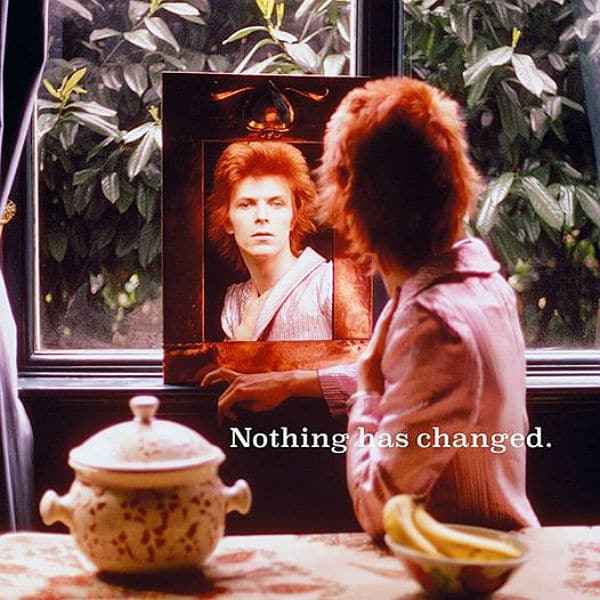 David Bowie: Nothing Has Changed Crack open the innovative packaging on the three disc edition of this most recent, comprehensive David Bowie collection and the word “nothing” changes to “everything,” which better describes the British star’s 50 year career. True to Bowie’s unique, chameleonic vision and looks over the years, the 59 tracks are programmed in reverse order. They range from brand new (the near operatic, heavily orchestrated, 8 minute opener “Sue [Or in a Season of Crime]”) to the final/first entry (a 1964 mono single from Davie Jones & the Kingbees called “Lisa Jane”).

It’s a generous set that maxes out the playing time of each 79 minute disc. In order to cram as many tunes into the platters as technology allows, “single edits” replace longer album tracks, a tradeoff that might irritate some listeners. A handful of rarities are included to rope in hardcore fans, but they are predominantly different mixes of available songs.

Most of the material on discs 2 and 3 has been re-issued often, leaving disc 1, that covers the past decade, as the most interesting. Few of these selections received much airplay so hearing them as the choices to represent the less commercially popular albums they originate from is eye opening. It shows Bowie never wavered from creating intriguing and provocative art rock, even when a large portion of his audience had bailed as they, and he, aged. Sure, there are duff tunes that could have been excluded, such as the execrable Mick Jagger duet cover of “Dancing in the Street.” But the hit to miss ratio is pretty astounding for one of the few living legend rock artists able to claim a half-century year arc. From his earliest blues roots, to singer/songwriter Brit pop, the edgy 70s Berlin trilogy, blue eyed soul, dance music, a brief flirtation with drum and bass and dark synth explorations, Bowie has typically led the masses down paths that expanded his always elusive boundaries.

On the package’s down side, the booklets have no essays, or worse, musician credits for each entry—although the producers and albums are noted—which is a frustrating missed opportunity for a historical release. There is also no music from Tin Machine, Bowie’s controversial late ’80s/early ’90s outfit. It’s a logical omission but still a segment of his oeuvre that deserves at least a nod. Perhaps expanding this to four CDs would have helped, but regardless this is as inclusive an examination as anyone but the diehard fan would want. Those new to, or unfamiliar with, Bowie’s expansive catalog would do well to start here and older followers who have lost the plot, especially over the past ten years, can catch up to one of the most consistently challenging artists of the past five decades.