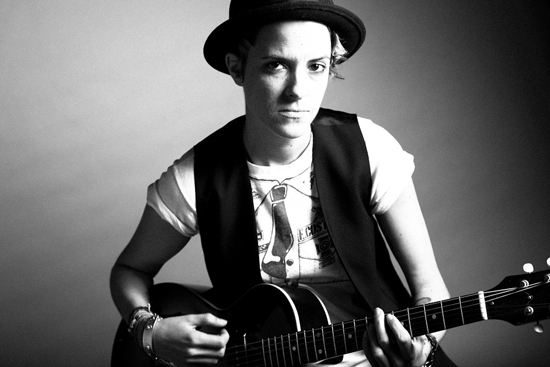 Celebrated British disc jockey Samantha Ronson has stepped out from behind the ones and twos with a pop-rock summer soundtrack for your great American roadtrip.

Her newest album, Chasing The Reds showcases her songwriting, from the catchy focus single “Summer of Sam” to sentimental ballads, like “Love Song” featuring Slash on lead guitar. Regardless of the tone or apparent substance in the lyrics, Samantha Ronson, 34, says it’s all composed of songs that came naturally to her.

“I just write songs I wanna write,” Ronson says. “I feel like when you’re doing what you love, instead of fitting yourself into somebody else’s box, that comes across.”

After all, as the stepdaughter of Foreigner’s guitarist Mick Jones, it seems Ronson would have some big shoes to fill. But Ronson says that didn’t just pressure her, musically. It impassioned her.

“I love songs,” says Ronson. “I grew up in the studio with songs. My stepdad wrote some pretty f—ing incredible songs. My brother [producer and musician Mark Ronson] made his records because he likes making songs. So, the standard was set pretty high for being true to what you want to do. I’m not just going to hand my song over to a producer; I want to be there every step of the way.”

Ronson says her album is based on her specific memories, and her personal reflections, but the album expresses honest emotions that listeners will identify with.

“I think it’s hard to write truly and honestly about experiences that aren’t personal to you, because you can’t really understand them,” she says. “But I like to keep things as unspecific as possible, because I know when we listen to music, we relate it to what’s going on in our own lives. Most good songwriting is pretty universal, I think.”

For example, Ronson says the title track is based on a specific night in Los Angeles six years ago, when she was following a friend in their car, chasing after brake lights, trying to keep up.

“It just seemed like a cryptic, perfect metaphor for what I was figuratively doing in my life: just chasing after things I’d later find out were not supposed to be mine,” Ronson recalls. “We all go through that at some point. It’s universal.”

Chasing after the unattainable is loosely a theme of the album as a whole. “I lost one of my friends a few years ago,” she says. “We started the band together. There are songs about him on the record. Chasing after ghosts.”

One of her favorite tracks, “Tuesday,” also follows the pattern. “I can remember exactly where I was when I wrote it. Sometimes when I’m performing the songs I get lost and I find myself there again,” she says. But the emotions conveyed are universal. “I want you like the first time / when we were so naïve / when a kiss was all I wanted / before believe broke down to leave.”

“It sums up so many relationships,” she explains of her favorite lines. “In the beginning everything is so new, and you’re not scared of being hurt. Once it’s passed, you wish you could go back.”

As much as Chasing The Reds is an album of personal expression, it’s one that Ronson hopes people can connect to. Whether that means singing along with the windows down or empathizing with the artist’s ache, she says, “making a connection with the listener – that’s the most important thing.”

Check out Samantha Ronson’s performance of “Summer of Sam” on Live! With Kelly: