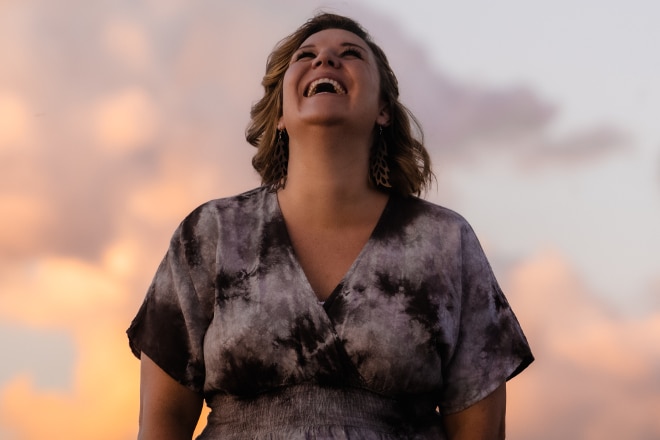 Denver singer-songwriter Elise Lieberth makes a powerful case for forgiveness in her new video for the appropriately named “Forgive,” off of the upcoming album ‘Invincible’.

“The idea for this song stemmed from a very emotional falling out with close relatives,” Lieberth tells American Songwriter. “I hope and pray that hearts will be softened, grace will be shed, and forgiveness will be given so that our family can reunite someday. Forgiveness is something we all struggle with at times, but it really is a beautiful thing.”

In the video, directed by Tyler Follen, Lieberth’s face is just as emotionally expressive as her voice. Her anger turns into pain then into resolve. It’s a powerful arc, made all the more powerful by her billowing vocals. “Surrender all the fault and the blame / Surrender all the guilt and the shame,” she pleads before belting the final chorus.

“I come from a family where saying sorry is hard and forgiving is even harder,” says Lieberth. “It’s taken me years to realize that it is OK to accept responsibility for my actions and words and learn to give people grace and forgiveness for theirs. I have also had to learn to forgive myself in the process.”

Lieberth credits her husband with helping her embrace forgiveness in her own life.

“My father in law is a retired pastor and thankfully he instilled forgiveness into my husband, Stephen. It wasn’t until I met my husband that I heard the words, ‘I am sorry, will you please forgive me?’ When someone tells you that they forgive you, there is no better feeling. I am very thankful for my husband teaching me how forgiveness truly works and I am so thankful that my children have such an amazing father to look up to.”

“Forgive” is the second single off Invincible, following “Beautiful,” which tells the story of Lieberth’s journey to self-love. In “Beautiful” Lieberth sings with a hard-won confidence, acknowledging her trauma only to push past it: “I was a broken girl / Hiding with makeup and curls / But all the cracks that I was finding / Became the roads to my silver lining.”

Invincible is Lieberth’s third album of original music and her first release since 2013’s Cover Letters from Elise. The mother of four had put her music career on hold while raising a family, but decided it was time to pick up where she left off after one her children posted a viral video of her on TikTok.

“I am so proud of [‘Forgive’] and all of the songs on my upcoming album Invincible,” says Lieberth, who co-wrote the album with fellow Denver singer-songwriter Rachel James (of the indie folk band Dearling), who also produced the album.

“[Invincible] is more mature lyrically than anything I have released in the past and touches on a myriad of emotions from heartbreak, wrestling with beauty, forgiveness, strength and love.”