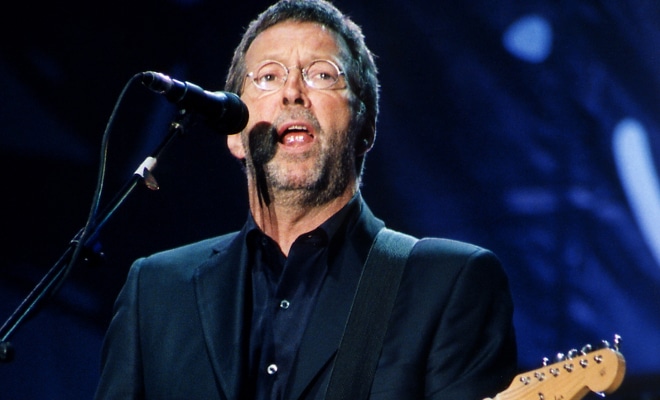 Home Songwriter U
Songwriter UFeaturesThe Story Behind The SongWriter's Room

The Story Behind the Song: “Change the World”

A Q&A with Gordon Kennedy

When and where did you guys write “Change the World?”

It began in Nashville’s Omni Studio A in 1991. We were working on recording 4 new tracks that particular day when, on some down time, Tommy Sims played Wayne Kirkpatrick and me, the idea, asking if it was something that we could write together. Some months would go by before Wayne asked for Tommy to put the nugget of the idea on a tape. Wayne would write the chorus lyric, and all but one line of the second verse before handing me a tape with his additions. I had Wayne’s parts and I had made some musical changes so, I was confident enough that we could go ahead and lay down a demo. In April of ’91, I travelled to Columbus, Ohio, to meet Tommy and record the demo track. I still have the micro-cassette recording of me in the car, playing the track through the car system, and singing along into the micro recorder, trying to come up with the first verse lyrics, and Wayne’s missing second verse line. By the time I got back to Nashville, I went back to Omni B to put guitar and vocals on the demo. None of us were ever together, when we each wrote our bits for that song.

Step outside the song for a moment. How would you describe “Change the World” as a music fan?

I think it sounds timeless, and you can hear a multitude of influences that we all love. Looking back, I remember when Tommy unveiled the idea that day in the studio, I was thinking “it sounds enough like McCartney” that I liked it. I imagined Wayne thinking “Yeah…Fogelberg…James Taylor…”, and Tommy probably thinking “hope this doesn’t sound too much like Stevie Wonder to fit this project.” 3 guys bringing a host of heroes and influnces, and I think they all surface in that song.

Could you tell us some of the backstory of the song? How much or how little did you edit it, during or afterward? Were there any phrases or words you can remember that were especially tough to make a final decision on?

While the original title from Tommy might have been meant to be a little more of a social conciousness type thing, it was Wayne’s idea to make it into a love song. Once that was established, it was mostly just finding those phrases that sounded like the grandiose things we wish we could do to demonstrate love.

The demo was done in a basement where Tommy had gone to work on a church choir project. He had a keyboard setup and we sampled sounds with a Shure 57, a la human-beat-box noises for the percussion. There’s even a laugh at the end of every bar as part of the percussion package. The initial track was keyboard driven, an electric piano that had a leslie effect going. In fact, when Dann Huff called me fro the Wynonna session, he told me he was playing my leslie guitar part on her track. I said “that’s a keyboard!” Tommy did some really cool strings, cellos mainly. I brought the 2” multi-track home and played a single guitar track on a ’46 Martin D-18, and added vocals and that was it.

From my publisher and dear friend Doug Howard, and Polygram Music Publishing, it made its way to Tony Brown who played it for and recorded it with Wynonna. Her label wouldn’t single it though. But, before she recorded it, Tony played the demo for his friend Kathy Nelson, music supervisor from Hollywood. She would remember that later when she was casting music for the film to be “Phenomenon.” From her, it went to Robbie Robertson, who was exec producer on the soundtrack, and he got it to Clapton and Babyface. With all of these people, we were in really good company!

I think we are made in the image of the ultimate Creator, and it is innate in us to want to create. I gravitate towards picking up the guitar which ultimately has me reaching for some device to record a new idea. The idea that there can be a moment that starts with a blank canvas, and perhaps within hours, yields something that wasn’t there before, is beautiful.

What has the overall experience been like collaborating with your co-writers on this tune?

Well, it was the first song that the three of us wrote together. And the journey it took us on was something we could have never dreamed. I remember one us saying right afterwards, “we should probably write another song together!” We went on to write 11 songs together and 9 of them got cut and some by more than one artist.

Always. Even with the song “Change The World,” we had initially wanted to get a record deal and that song was the last attempt at delivering what the label had called a “pop hit.” When they passed on us, we walked away saying that we failed. Then, when Wynonna cut it, we were told for 2 and half years before her album finally came out, that it would be a single. Her label put out three singles, none of which were ours. I saw Tony Brown on the row one day and he told me her label was saying they’re not singling it and that he thought they were crazy. We walked away again saying we had failed. Five years after the song idea was introduced, four years after the demo was done, Clapton recorded it and it spent 13 weeks at #1 and a record 81 consecutive weeks in the Top 20 AC charts in Billboard., and it was Grammys Song Of The Year.

0
Gordon Kennedy has quite the resume. He is a multi-Grammy Award winning songwriter and record producer, a talented guitarist, and is widely considered to...
Read more
Home Featured Post

0
On Tuesday evening we sat down with hit-maker Brett James before he performed for the 2nd Annual ASCAP Experience ‘In The Round at the...
Read more
Coaching

0
If there's one approach to writing songs that works every time, I still haven't found it. There are, of course, those rare...
Read more