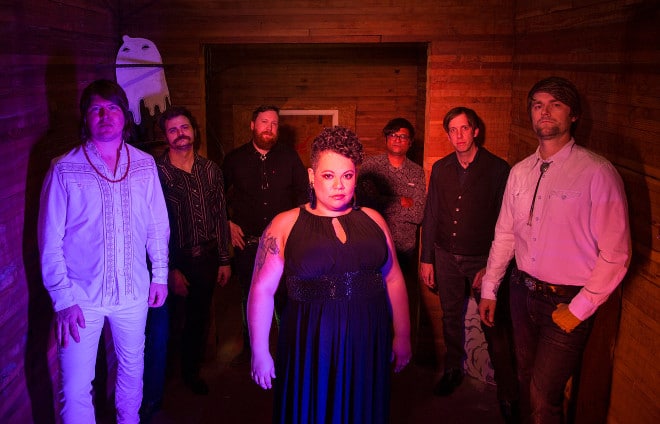 Federale Stays In Its Unusually Innovative Groove With ‘No Justice’

Spaghetti western soundtrack rock? Is that a thing?

It is for Federale because the band has been cranking out this distinct, somewhat oblique conglomeration — equal parts Ennio Morricone, Lee Hazelwood, and Nick Cave with a touch of Chris Isaak’s less romantic side — since its 2008 debut.

If it’s difficult to imagine building a career on this idiosyncratic approach, just check out any of the outfit’s previous four albums, and you’ll soon understand how the sound expands from its twang, reverb heavy guitar origins to explore and reveal new cracks and crevices, creating dusky audio movies that are bracingly unpredictable.

Think of it as accompanying Quentin Tarantino’s next Western opus before it’s even written.

This side project of Brian Jonestown Massacre bassist Collin Hegna has taken on a life of its own, shifting from steadfastly instrumental in its earliest incarnation to one with only two vocal-free songs on this, the group’s fifth full length outing. Hegna now relinquishes bass duties to focus entirely on singing (he’s also credited with “whistles”), infusing each selection with his alternately booming and droning/moaning baritone voice. He leads this seven piece outfit through its cinematic, widescreen paces substantially enhanced by Maria Karlin’s mostly wordless and frequently creepy, sometimes spine-tingling, operatic vocals. Sebastian Bibb-Barrett’s trumpet adds time-stamped 60s south of the border effects and strings (from members of the Oregon Symphony) on five tracks heighten the music’s already pulsating melodramatic effect.

Hegna’s words evoke images of wicked men in crooked houses (“Aim for the Heart Ramon”), femme fatales that leave the protagonist with “an empty bottle and a heart full of pain” (“She’s Headed for the Highway, I’m Bound for the Train”), and souls that are sold for a handful of dirt (“Unchained Malady)” among other nefarious and darker edged concepts concerning characters at the end of their psychological ropes. He’s attributed with all the songwriting but probably should have at least credited Angelo Badalamenti for borrowing (stealing?) his distinctive Twin Peaks riff on the closing “When Snow Falls.”

Federale’s overall groove is clearly indebted to him and the others noted above. But few if any artists are brave and/or creative enough to channel this ghostly, often ominous vibe into moving, sensual and stirring music. Federale does that while finding fresh ways to expand its defined boundaries and staying true to its unusual, innovative vision.

Check out the Federale website to get the album.