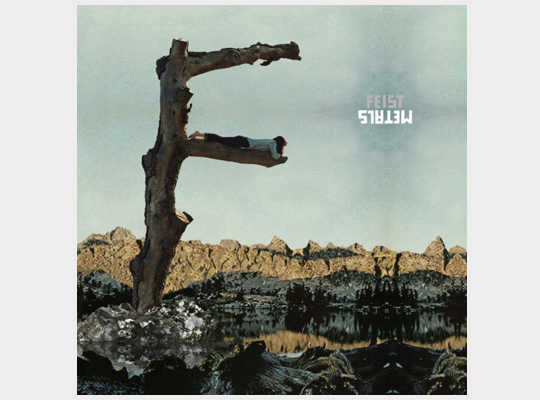 “So much past inside my present,” it turns out, is the one-liner from Feist’s wildly popular album The Reminder that has stuck around. What seemed like just one of many quaint choruses on an album full of them four years ago now hovers and looms over Metals, the new album from Feist.

If Feist has rejected anything from her past fame it’s that she’s no longer very interested in being adorable. But Metals is less a harsh reaction to the surprise success of The Reminder and more a refinement of its sensibility. The payoffs don’t come as easy this time around, the melodies are often subdued, if not gloomy, and there’s much less hand clapping. Yet Metals is very much a pop record, one that welcomes rather than excludes. Feist is still quick to invite sing-alongs, and it’s not at all hard to imagine very large crowds rejoicing in the “Bring them all back to life” chorus in “Graveyard,” a song that at first comes across as a cheap opportunity to have a sing-along about vampires.

But “Graveyard,” like much of Metals, is a song that ponders and tries to wrestle with time and its consequences. Feist (thankfully) has little need to reflect, ruminate, and wax poetically on Death and Time; she’s merely curious. She wanders around a graveyard, taking everything in for what must be the first time, and finally comes to the simple conclusion that “blood as ice is an empty crisis.”

For Feist, ever the self-conscious songwriter, what seems most to keep the past thriving in the present is music and song. In “How Come You Never Go There,” she sings “where we look for where it went, it’s only echoes in the melody.” At some point singing about lost love becomes the heartbreak itself, or as Feist puts it far more eloquently: “for a year she was anti-pioneer, singing sappy songs about what went wrong.” Feist is hardly the first singer to rhyme melody and memory, but “Bittersweet Melodies,” one of several quieter, acoustic songs on the second half of Metals ties things together far too well to be a throwaway track.

Metals indeed slows down noticeably after the first two songs and soon settles into a quiet, fairly consistent pace. Still the most important instrument in the band, Feist’s voice keeps the record from ever veering too far into anonymous coffee-shop folk/pop. Her voice flutters, bounces, and hiccups through the twelve songs on Metal, and her singing is dynamic and never boring.

Metals finds Feist more wistful than sentimental, and by “Comfort Me,” towards the end of the record, she’s become quite bitter. The opening track “The Bad In Each Other,” a song about time, love, and their many well-intentioned victims, is the saddest song on Metals but also the most triumphant. For a song that should be downright depressing, the chorus is an oddly positive, affirming moment, maybe because Feist is clearly no longer content bouncing around and counting to ten, and maybe because for now, she’s happy to sing a sappy song about what went wrong.