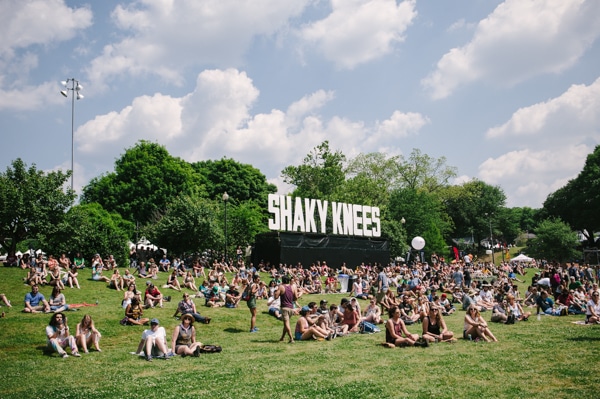 For its third act, Shaky Knees put together one of the strongest festival lineups in recent years. To some, it might have seemed a daunting task to follow-up last year’s Modest Mouse/Replacements-led spectacle, but with this year’s more cooperative weather, better location and stacked lineup, it exceeded all expectations. Here are some of the best shows from a weekend of nonstop quality.

CHECK OUT OUR PHOTO GALLERY OF THE FESTIVAL

Manchester Orchestra started their set heavy and kept the trend going for as intense of an hour of music that could be mustered in the middle of a hot-ass Georgia day (sporting all black duds). While they were on familiar stomping ground in their hometown of Atlanta, the band played like they had something to prove. Maybe it was sharing a bill with the likes of bands like Wilco and Built to Spill (both of whom singer Andy Hull has acknowledged as primary influences), but Hull and co. powered through their devastatingly brutal set with a youthful energy that his idols might have a hard time mustering at this point in their careers.

Whatever drama lurks behind Kim Shattuck’s untimely departure from the group, it’s hard to argue with the results of her replacement, Paz Lenchantin. If you squint your eyes, you almost can’t tell Kim Deal isn’t up there playing the iconic bass lines she wrote. That is, until she sings. For the rest of their parts, the Pixies are still the Pixies. The rest of the band functions as they always have and their parts sound as crisp and ground-breaking as they did. Despite a healthy dose of songs off the band’s polarizing 2014 album Indie Cindy, the set felt like a classic Pixies show through and through and nobody was complaining about either Kim not being there.

Hot off the heels of a significant solo tour with his son, Jeff Tweedy is back with his old bandmates and celebrating the band’s 20th anniversary. The term “career-spanning” will be tossed around a bit in this article, but few 20-year-old bands have as deep of a discography as Wilco, and even fewer make use of that fact. For a band that made its name crafting challenging, disparate pop tunes, it’s easy to see why the band have gained favor with the jam band crowd. The group innovates in everything they do musically, whether that’s writing new music or just reworking old songs to keep them exciting for any returning audience members.

Their Shaky Knees show was heavy on cuts from the band’s magnum opus, Yankee Hotel Foxtrot, but the second half of the set saw them reaching back and playing tracks from their first two albums.  A thundering sing-along rendition of “A Shot In The Arm,” closed out the show, leaving the dazed audience wondering: “Why exactly aren’t these guys headlining tonight?”

The Boulevard Stage was packed for alt-rock heroes Built To Spill, with longtime fans eager to see the band with its new lineup. Since the departure of longtime bassist Brett Nelson and drummer Scott Plouf, singer-songwriter Doug Martsch picked up two young guns in Jason Albertini and Steve Gere. After recording the group’s most recent album, Untethered Moon, with the new rhythm section, expectations ran high for the live show.

As the band effortlessly waltzed through opener “Randy Described Eternity,” a sigh of relief passed over the crowd. Yes, this is the same Built To Spill we know and love, but with a little bit of youthful vigor injected for good measure. The band played songs from almost all of their records, including “Joyride.” But the highlights of the show were the new songs, like “When I’m Blind,” a pop song that quickly veers off into a devastating, deconstructive long jam. If that weren’t enough the band closed with Blue Oyster Cult’s “Don’t Fear The Reaper,” a taste of what was to come for fans who attended the band’s late-night after-party show at The Earl that evening where the band played an incredibly eclectic cover song set with a few originals sprinkled in. It’s still too early in their tour to tell if this will be the highlight, but Atlanta was a place where Built To Spill pulled out all the stops, and it’s likely diehard fans will be kicking themselves for missing this one.

The Strokes didn’t need to go out on a limb to please their audience, offering a killer, career-spanning setlist with an emphasis on their first two records. Several websites erroneously reported that the band was joined by indie wunderkind Mac Demarco for their song “Last Night,” however the young singer only briefly graced the stage to “fan out” and hug Casablancas between songs. No, the band didn’t need any frills or guest appearances here, just all the songs you’d want to hear played with twice the energy of their records. Also it didn’t hurt that they played “You Talk Way Too Much” for the first time since 2004, as well as the live debut of “All The Time.”

Lead singer Julian Casablancas was in fine awkward-kid form with his crowd banter, giggling at his own halfhearted witticisms and teasing his band members. For a guy who was accused of looking sleepy and lazy on stage a few years ago, Julian was at no shortage of energy, screaming till his voice sound ragged and nearly out-of-tune, and then screaming some more for good measure. And for a band that’s always had heavy expectations placed on them, The Strokes prove time and again why they’re one of the most important rock bands in recent history.

0
With the power of technology, music is able to cross land and sea at a very rapid pace and the most recent occurrence of...
Read more
News

Letter From the Editor: An Opportunity To Be Great

0
It may be an odd choice to select quotes from comedienne Lucille Ball to anchor a “Letter from the Editor” of a...
Read more