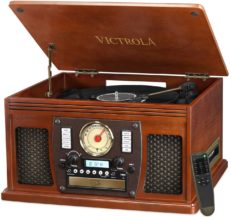 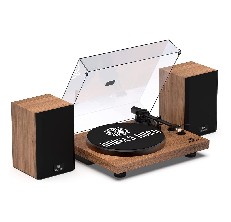 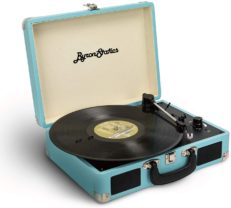 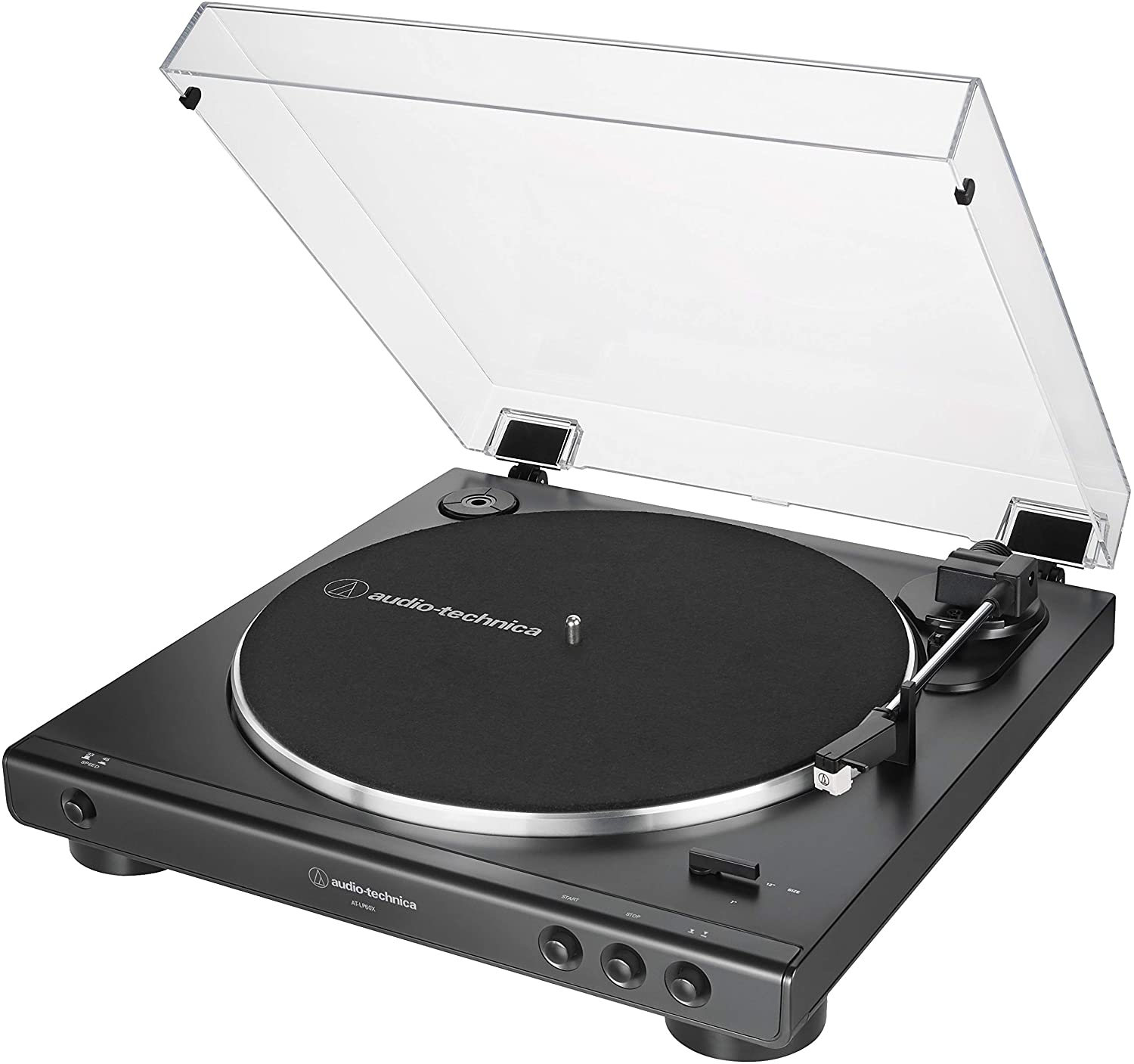 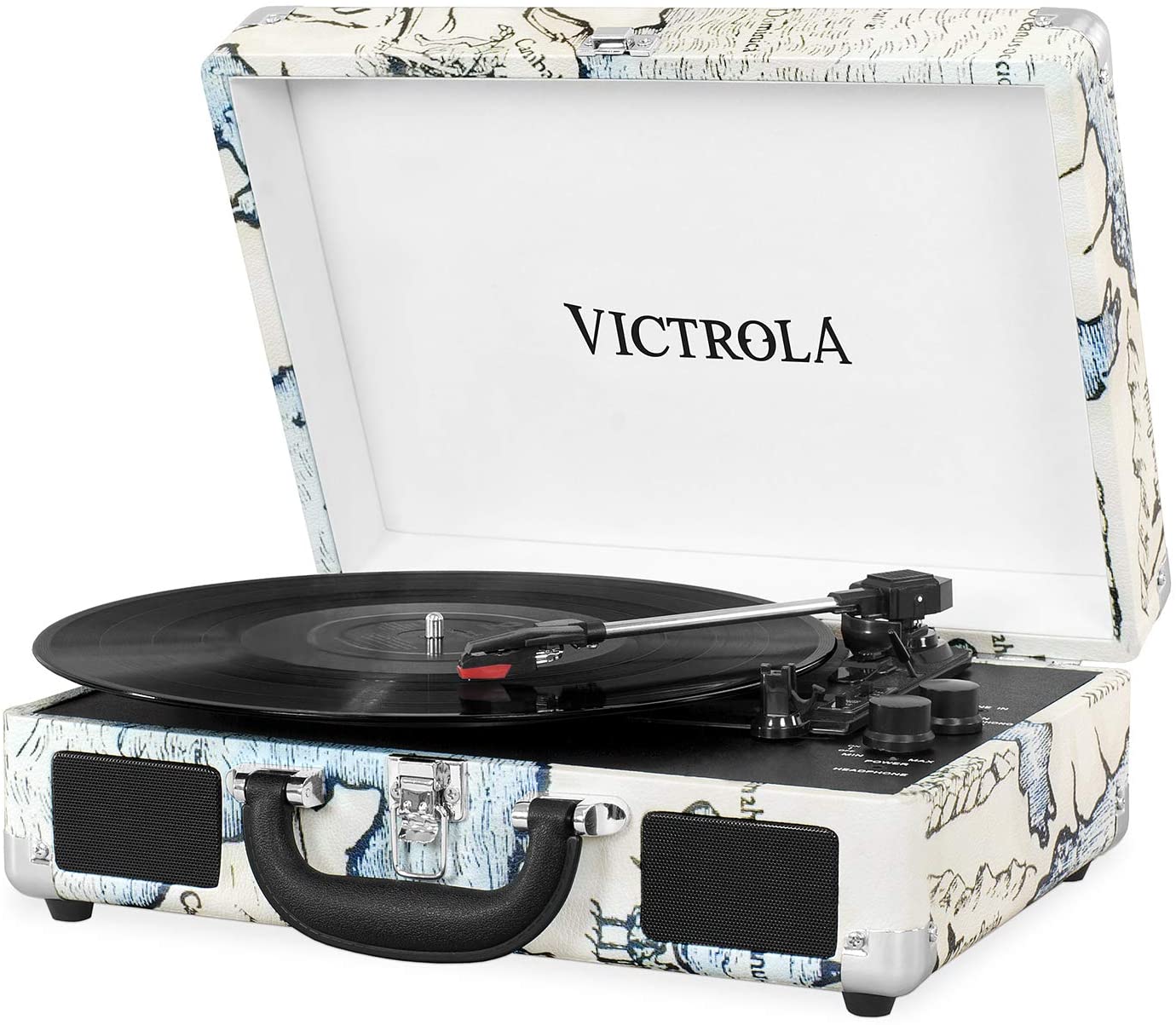 We've seen many retro items make a comeback in the last few years, and the classic record player is no different. Record players might be vintage, but they still offer a great way to enjoy some music while also contributing to your interior décor. We've put together some of the most elite record players of 2022 that are excellent at playing your favorite tracks while also providing you access to modern features! Whether you are a music fan yourself or giving a gift to a vinyl lover you know, record players are a great option, sure to please anyone who appreciates music! Also, if you are looking to equip your living room or bedroom with a record player, get one of these good boys we've reviewed - they're budget options and sure to light up your room with an ornamental addition!

Comparing the Cheap Record Players for 2022

A record player that features a vintage look on the outside. Inside, the turntable offers the latest technologies – CD, cassette player, Bluetooth, aux, and audio streaming straight from your smartphone! It doesn’t require a separate stereo system or extra equipment – is a complete package itself! It’s got a three-speed belt-driven turntable, features all the controls you need, comes with a remote control, and sports a high-quality design and finish.

The ANGELS HORN Vinyl Record Player features an ultra-stylish, modern appearance with two powerful external speakers. It can function as a vintage record player supporting records of all sizes. Or you can make use of its modern twist and use the built-in Bluetooth receiver to play music directly from your smart devices.

It features a high-end brand phono cartridge that greatly improves sound quality without scratching up your record’s precious grooves. The included bookshelf speakers are high-definition producing pure and powerful sound quality. They increase your home’s aesthetics without taking up too much space. Plus, it comes with a detailed user manual for easy assembly and usage.

The compact structure of this record player makes it an ideal option for traveling. With stereo speakers built into this record player, you can enjoy better quality sound. Moreover, the turntable gives you three different speed settings to choose from. Design-wise, it is built into a classic suitcase-style case. Our favorite thing about this record player? You can choose to go for either an only-wired option or if you’re fond of modern features, you can buy yourself the one with Bluetooth as well!

Available in six beautiful finishes and two variations; wired and wireless – experience the high fidelity audio of vinyl with this excellent record player by Audio Technica. It’s a fully-automatic, belt-drive turntable and is capable of operating at two speeds; 33 1/3 RPM and 45 RPM. Moreover, it’s made up of a die-cast aluminum platter and is hands down the sturdiest record player on our list. It has a beautiful, attractive finish and we’re in love with it. 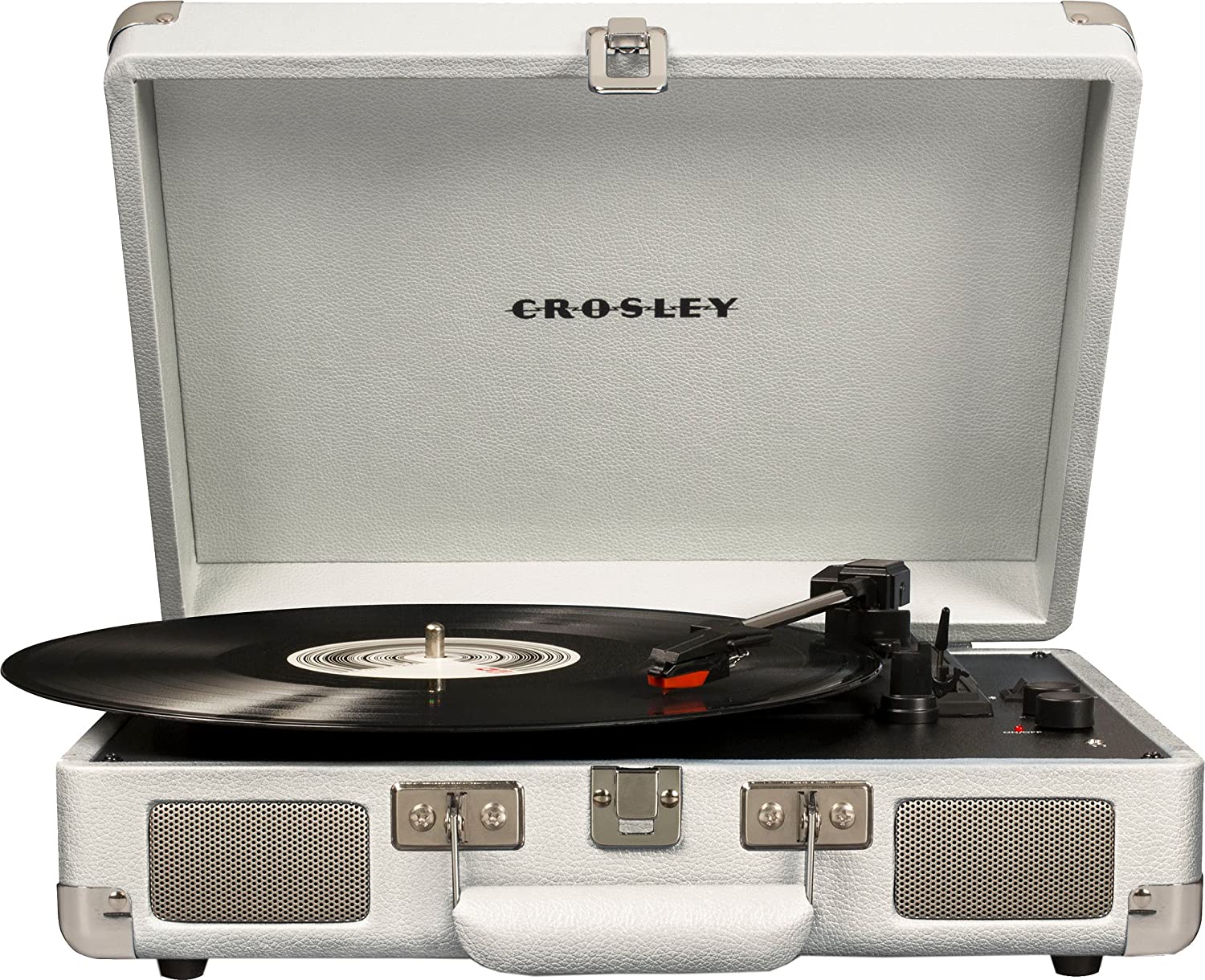 Available in 31 colors; this vinyl wrapped turntable features a built-in Bluetooth receiver that allows you to stream your music flawlessly! Plus, it’s available in two variations – the other one gives you a Bluetooth output as well. The CR8005D-WS has adjustable pitch control, dynamic full-range stereo speakers, RCA and headphone jack outputs, and more!

Available in over three dozen designs, three-speed belt-driven turntable, expanded connection options, and all the controls you need to play a record flawlessly! It’s a suitcase record player with upgraded, decent sound quality and sits on isolating feet that reduce vibration. Moreover, since it’s housed in a suitcase and is small, it’s perfect if you are the sort to travel around with your tunes. Retro looks, loud sound, and the convenience of modern technology make this record player excellent for listeners and vintage enthusiasts.

If you have a love for old vinyl records, then you definitely need to invest in a record player. Owning a record collection is a great way to appreciate music in a different way than digitally downloading it. With so many choices out there, we know that finding the right record player can be a challenging task, so our buying guide is here to help you make sense of everything you need to know.

How Does a Record Player Work?

The most important part of a record player is actually not the record player itself but the record. When you put a record on a record player, you place the player’s needle on to the record. As the record spins, the needle will align itself into the groove. The movement along the groove causes the needle to vibrate. These vibrations are then sent to the cartridge that converts them into electrical signals. The signals are then diverted towards an amplifier that again turns these electrical signals into sound signals and you get that really nice, unique sound through the built-in or external speakers.

What are the Different Types of Record Players?

There are three main types of record players: manual, automatic, and semi-automatic record players. The difference comes in how the needle is put on and removed from the record.

On an automatic record player, you won’t ever have to touch the needle. Placing it on the record and removing it from the record is as simple as the touch of a button!

With a semi-automatic record player, you’ll only need to do half the work. You’ll be responsible for placing the needle on to the record, but once it’s done playing, the needle will automatically lift off the record on its own.

With any type of record player, you’ll encounter a speed switch that will allow you to play different types of records.

Having a speed switch is important because different sized records play at various speeds, which are measured in revolutions per minute (RPM). There are three main sizes of records; seven inches, ten inches, and twelve inches.

Seven-inch records have a speed of 45 RPM. Each side can fit approximately five minutes of music, so these records will mostly have singles on them.

Ten-inch records are not as common today, so if you find a record player that won’t play this size record, it’s not a deal-breaker. For reference, they play at 78 RPM.

These records spin at 33 RPM. They can store up to 44 minutes of music on it, 22 minutes of playtime on each side, which is the perfect size for an album. Most vinyl records that you come across today are twelve inches in size.

Nearly every record player will play at 33 and 45 RPM, which equates to seven and twelve-inch records. If you’re looking for a record player that can also handle the ten-inch records at 78 RPM, you’ll need one that has “three-speed” support.

How Much Do Record Players Usually Cost?

Prices can vary depending on the record player you get. If you’re committed to vinyl records and love this old-fashioned form of music, then you’ll want a record player that reflects that interest. If this is you, you can expect to find a record player within the range of 200 to 400 dollars. But you don’t have to break the bank in order to enjoy a record player. For those dipping their toes into the world of vinyl records, you can get a good-quality record player for around 80 to 100 dollars. If you go for a less expensive model, you might consider making sure it is upgradeable so that you can enhance your record player’s features later on down the road if you so choose to. The most important thing, however, is to make sure you’re aware of your budget before you make any final decisions on a record player.

Tips for Using a Record Player

If you want to get the most out of your record player, it’s best to know a few things beforehand.

When you pick up a record, you want to handle it by the edges. This will minimize the grease and dust that gets on the surface, which could affect the sound quality that is produced when you play it on your record player.

You also want to be gentle with the record when you’re placing it on and taking it off of your record player. Make sure to line up the holes you see on the disc with the spindles on your record player. When you’re done listening to a record, place it back in the sleeve to prevent damage from occurring to it.

If you have a manual record player, you want to place the arm and needle on the outer edge of the record. Be sure not to scratch the needle across the record to try and get it to play.

Q: Can I attach speakers to a record player?

A: Yes, you can attach speakers to most record players. However, more often than not, your record player will have stereo speakers built-in. Still, if for some reason you require a speaker extension, many record players will give you access to that feature through either a Bluetooth-out function or an aux output.

Q: What is the point of having bluetooth in a record player?

Q: Can I upgrade my record player?

A: While some are easier to change than others, you can always replace your record player's platter - a heavier platter is better since it reduces vibrations. You can also introduce a platter mat for additional dampening. Moreover, the tonearm and stylus are also replaceable. The stylus should be replaced after every 1000 hours of playing. The tonearm has a great role in determining the accuracy and consistency of how the record rotates. 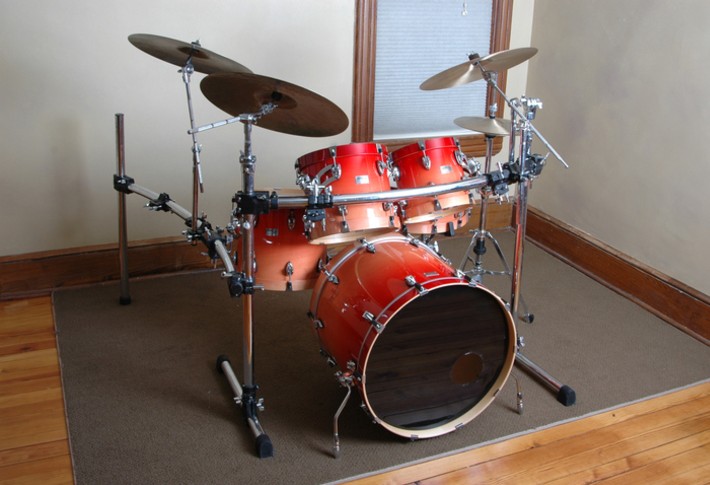 Stability And Good Looks: Complete Your Drum Setup With The Best Drum Rugs 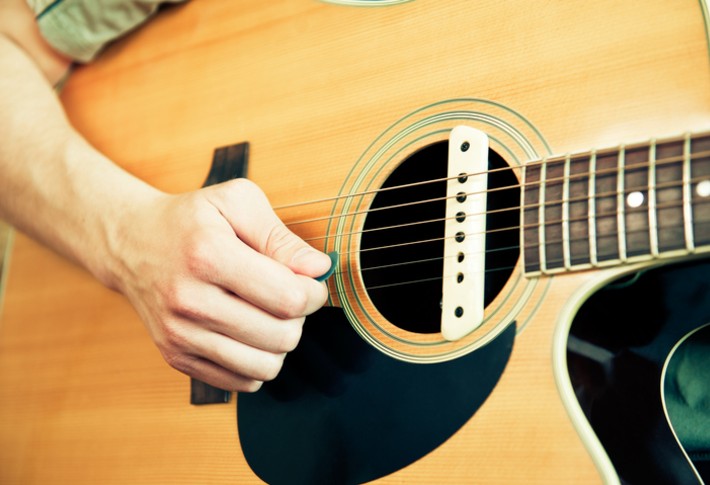 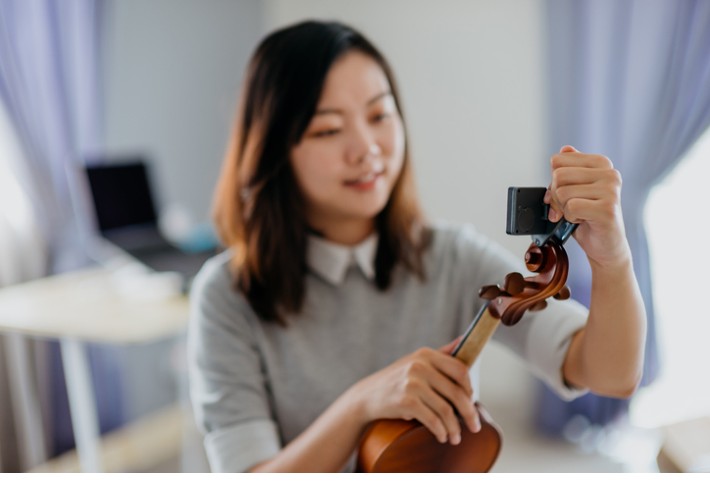 Bringing Forth The Best Stringed Instrument Tuners for Beginners