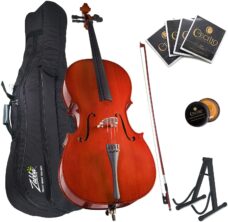 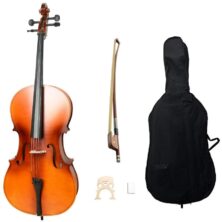 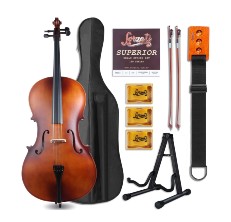 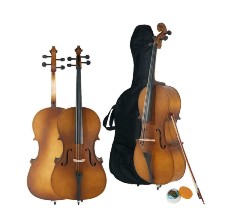 Originating from the 16th century, you can call this beautiful, intricate instrument a baby of double bass and violin - with the looks inclining more towards the double bass and tone being lower than that of a violin and but slightly higher than the double bass. While the maestros of cellos have more sophisticated ways of in-depth analysis of this instrument, we’re bringing a list of the finest cellos for 2022 that you can scour through to take off on your journey, along with a buyer’s guide to help you choose the best one.

Cellos are beautiful and create a grand mournful sound that serves as the backdrop of many TV shows, movies, and albums! Let’s kick it off with the cellos first.

Top 8 Cellos for Beginners Worth Considering in 2022

Available in three beautiful finishes; natural, purple, and black – this cello kit comes loaded with a stand, soft case, bow, rosin, and more! It’s available in three sizes so you can buy an appropriate size for your kid. Plus, it sounds good – sounds very rich and mournful and the cello has an elegant design.

This is a 4/4, full-sized cello that works for most students and beginners. The body is made out of different wood and the bow is curated out of white horsetail and arbor. The full set includes the cello, bow, rosin, bridge, and soft bag. Overall, it’s a great cello with an excellent sound. However, you’ll have to adjust the bridge yourself when it arrives.

The Forzati FZC168 is a great-sounding student cello featuring superior craftsmanship and comes with everything a beginner needs to get started! It comes with two bows, 3 rosins, an endpin stopper, a stand, a string set, and fret stickers. Moreover, with its exceptional sound quality, it’s a steal at this price point.

Available in a blue and natural wood finish, the Lykos’s 4/4, full-sized cello serves as a superior present for musicians! It’s great for beginners and anybody looking to test their determination with a cello. It’s made up of a crack-proof top, back and sides, durable neck, excellent tailpiece, and a solid fingerboard and pecks. It comes with a soft case, bow, and rosin. The sound is decent as well! 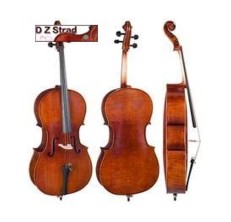 The D Z Strad Cello is available in 7 sizes and is hands down the most beautiful and natural-looking/sounding cello on this list. It features meticulous workmanship expert varnish work and gives out great tonal qualities. It comes with all the required accessories – the only reason it’s not on top of our list is that it’s an expensive one! 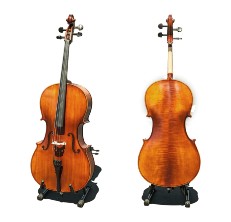 This ebony-fitted matte finish wood cello by Paititi comes with a soft case, rosin, stopper, and a brazilwood bow. It is available in three sizes and features a price that’s light on the pocket. It comes set up and ready to be played – has a hand-carved spruce top, hand-carved maple back, neck, sides, and scroll. Moreover, sound-wise, you get a deep, sensual sound with excellent projection. 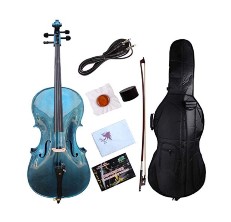 This is a 4/4 full-sized cello by Yinftente, made up of solid maple spruce wood. It has ebony fittings, a very sweet sound, and comes with all the required accessories; a thickly padded bag, brazilwood bow, rosin cake, steel strings, and more! 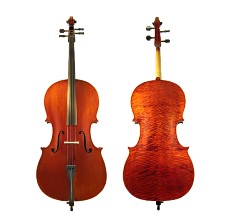 If your aim is to only learn or get the hang of the cello first – it’d be best if you buy a standard piece first before investing in a high-end cello – the D’Luca’s Cello is ideal for this scenario. It doesn’t cost much and is the perfect entry-level cello. It comes in a complete set; includes a Mongolian horsehair bow, padded gig bag, and a rosin cake.

From the particulars of the modern electric and silent cellos to the uniqueness of the hand-crafted cellos, the remainder of this article will fill you in on everything else to help you make a better decision.

Let’s Start by Learning Some History About Cellos

The earliest discovery of Cello is believed to be back in the 16th century and dates to when Andrea Amati had started manufacturing instruments for Charles IX, the King of France. Of course, not many people knew about this instrument back then and Cello was too expensive or out-of-reach for peasants and the general public.

After Amati, it came down to Stradivarius - the famous cello maker who opted to design and produce this instrument. He improved his designs from the late 17th century to the early 18th century - some of his original pieces are still owned and played by enthusiasts today!

What to Consider When Buying a Cello

Since you’re now up to date with the top beginner cellos out there, as well as the rich history of this instrument, let’s get you up to pace with the top factors to consider when getting one:

The fingerboard - also known as a fretboard on the fretted instruments - is the long wooden thin strip that rests the strings against it to produce the right chords. A fingerboard should be easy to hands/fingers and improve a beginner’s learning curve.

Cellos come in a couple of sizes - 4/4 is considered as the full-size. We’d suggest you get yourself a full-sized one since that’s what most orchestras will support. It offers the widest tonal diversity. However, if you’re buying a cello for your kid, you’ll have to buy one of an appropriate size so their learning curve improves instead of slowing down.

The classic maple finish with a spruce top is widely seen and for all the good reasons. Sometimes, you’ll see poplar used on the back and sides - this surely does have an effect on the sound and people usually choose to opt for it or out of it by preference.

Similarly, there are laminated wooden sheets on cellos out there and that’s something you want to avoid at all costs! Moreover, the pegs, tailpiece, and fingerboard are typically made out of a darker and stronger wood - the latter is to ensure that these areas can withstand the pressure exerted on them.

One bow can respond differently to different instruments and that’s exactly why experts suggest buying a bow only after you’ve bought a cello. Almost all beginner kits come ready with a bow but more often than not, even the teachers would suggest their students get a quality bow. A rule of thumb, in this case, would be; to spend only 25% - 35% of your cello’s price.

The tailpiece of a cello has a tuner that helps a cellist raise or lower the pitch - it attaches to the lower end of the cello to the cello string.

The tailpiece should ideally be made out of ebony, stronger hardwoods, or allows like steel.

Strings with a core sound richer and have a fuller sound. The all-metal strings have a bright, more echoing sound. The ones your cello on default comes with are usually not that good and you may have to quickly change them.

The bow and the strings are two things that your teachers may suggest you to change right away.

You apply rosin to your bow’s horsehair before playing the cello. It’s basically just resin gathered from coniferous trees like pine. Applying rosin on your bow before playing gives it a more sticky texture and helps you bring out better sound due to improved friction and vibration against each string.

The endpin is that little metal that extends from the bottom of your cello. It helps you place the instrument and ideally, it should be adjustable so you can decrease/increase the height of your cello.

Currently, in the world of modern cellos, we have three major types; acoustic cellos, electric cellos, and silent cellos.

The classic/acoustic cello’s sound is fully echoic and natural. It relies on acoustic resonance to produce its sound. It can be converted into an electric cello or semi-electric cello by installing a pickup.

The electric cello relies on electronic resonance to produce sound. It usually needs a battery to be powered and an auxiliary or some sort of cable so you can play your cello over the speakers. One of the benefits of opting for an electric cello is that you can get your hands on a plethora of effects such as ‘wah’, reverb, delays, and more!

If you’re planning to play on the stage and want to avoid any potential hassles, go for this one.

As opposed to electric cellos that do produce enough sound to be heard in a room and not down the corridor, cellos are whispery quiet and completely rely on electronic resonance. You can get these if you prefer to practice in complete silence, with a pair of headphones on.

Taking Good Care of Your Cello

Cellos are intricate and demand to be stored with care. If you end up knocking it up in a wall and causing a dent/tear in the wood, it’ll most likely have an effect on its sound.

Similarly, if you’re storing it in your house, a soft padded gig bag will do just fine but if you’re on the road a lot, consider investing in a hard case so your cello remains safe from the weather elements.

For the bow, we suggest applying the rosin as needed but don’t overdo it, as it can create buildup on your strings.

Do Cellos Come With a Warranty?

Most beginner cellos in this article do not come with a warranty.

However, if your cello costs $500 or more, it will have one. So, if you’re spending over $500 on your cello, make sure your product comes with a year or two’s warranty just so you’re on the safe side as a buyer.

Q: Should I buy a cello assembled or assemble it myself later on?

Q: What are some useful accessories to get with a cello?

A: Rosin, cello stand, extra strings, and a clip-on tuner for your cello are some of the useful accessories that a beginner cello kit may not come with. So, if you’ve got the bucks, make sure to invest in these items! 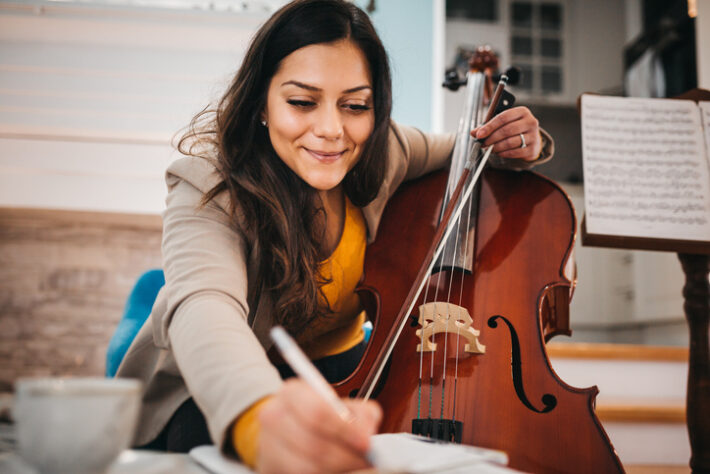 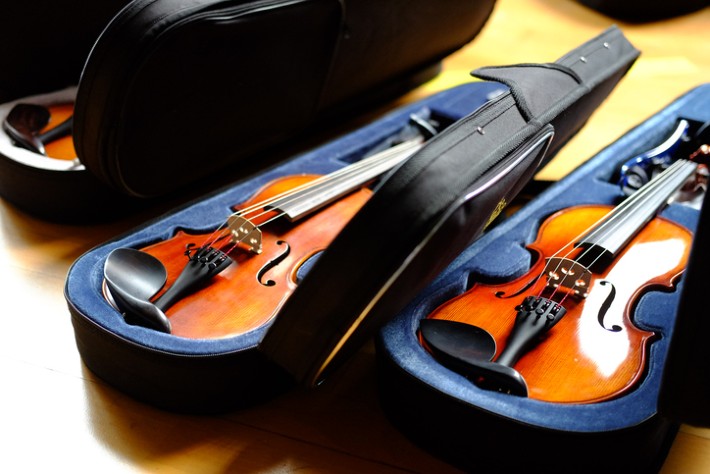 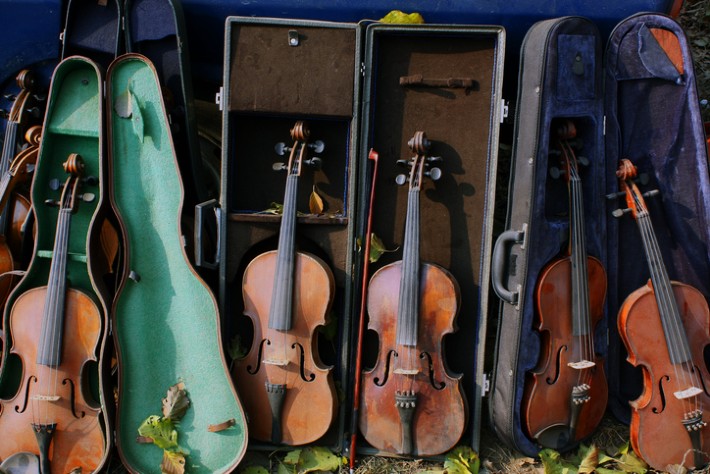