Cheap Electric Guitars Bound to Make You Sound the Best 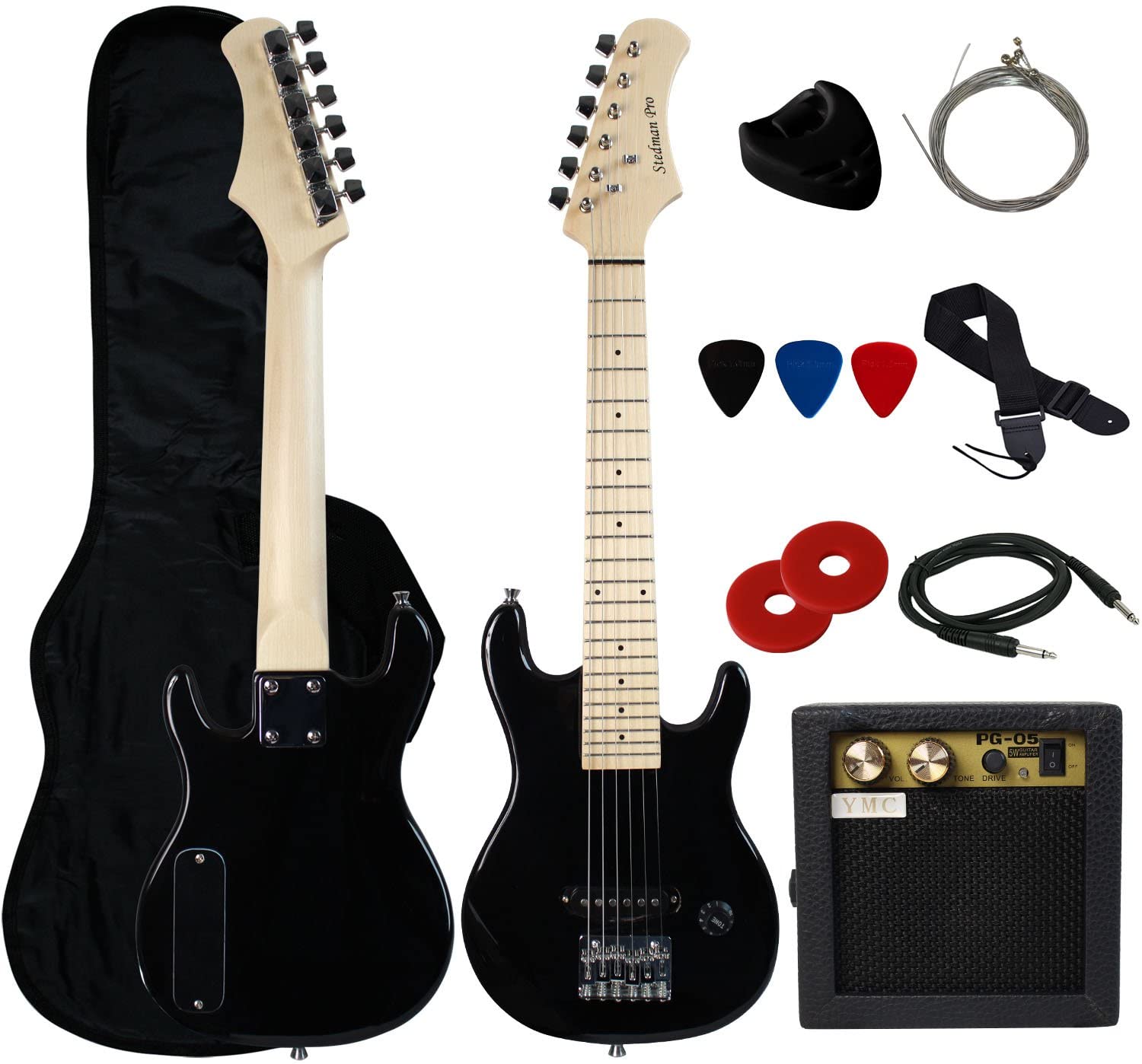 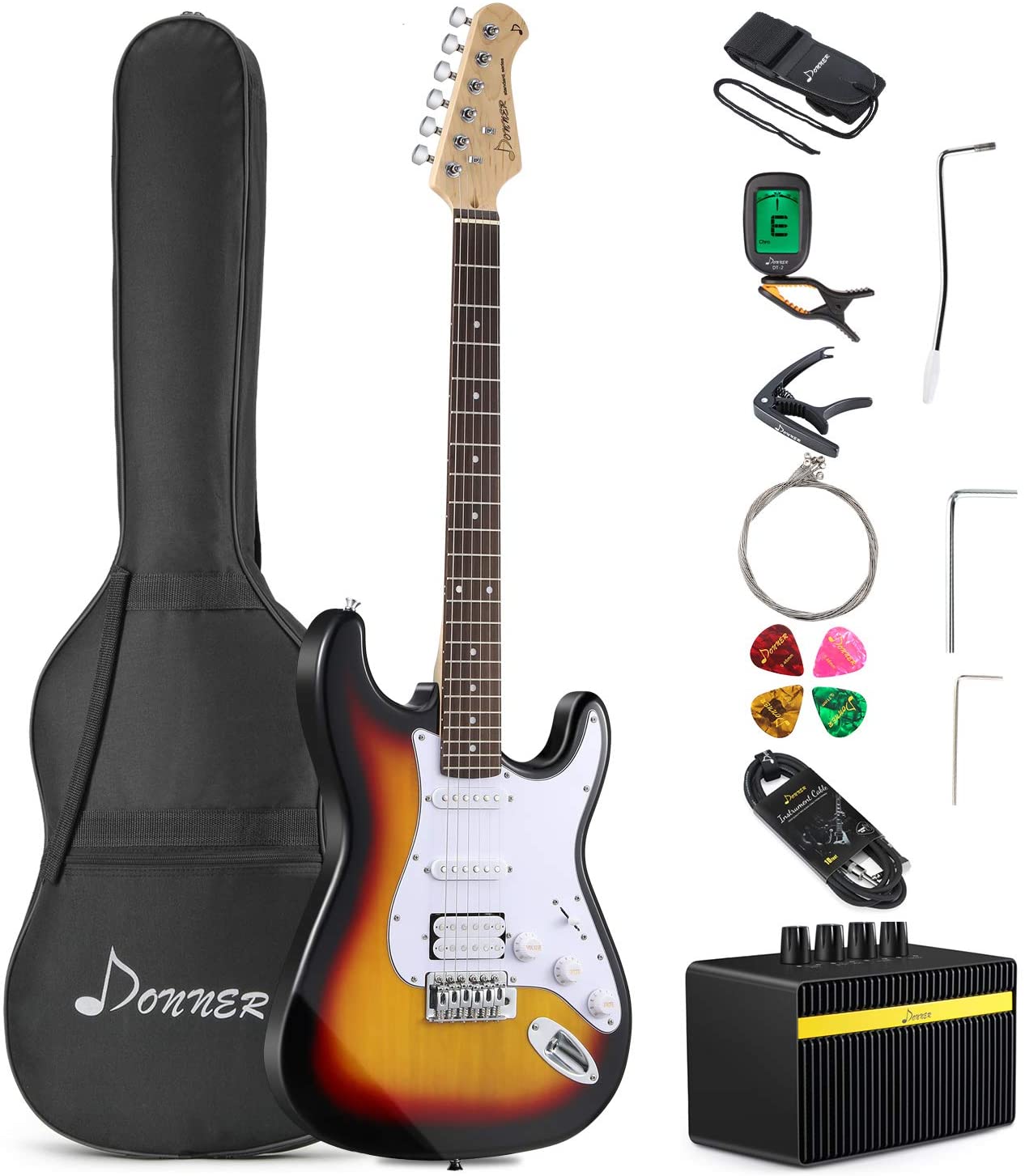 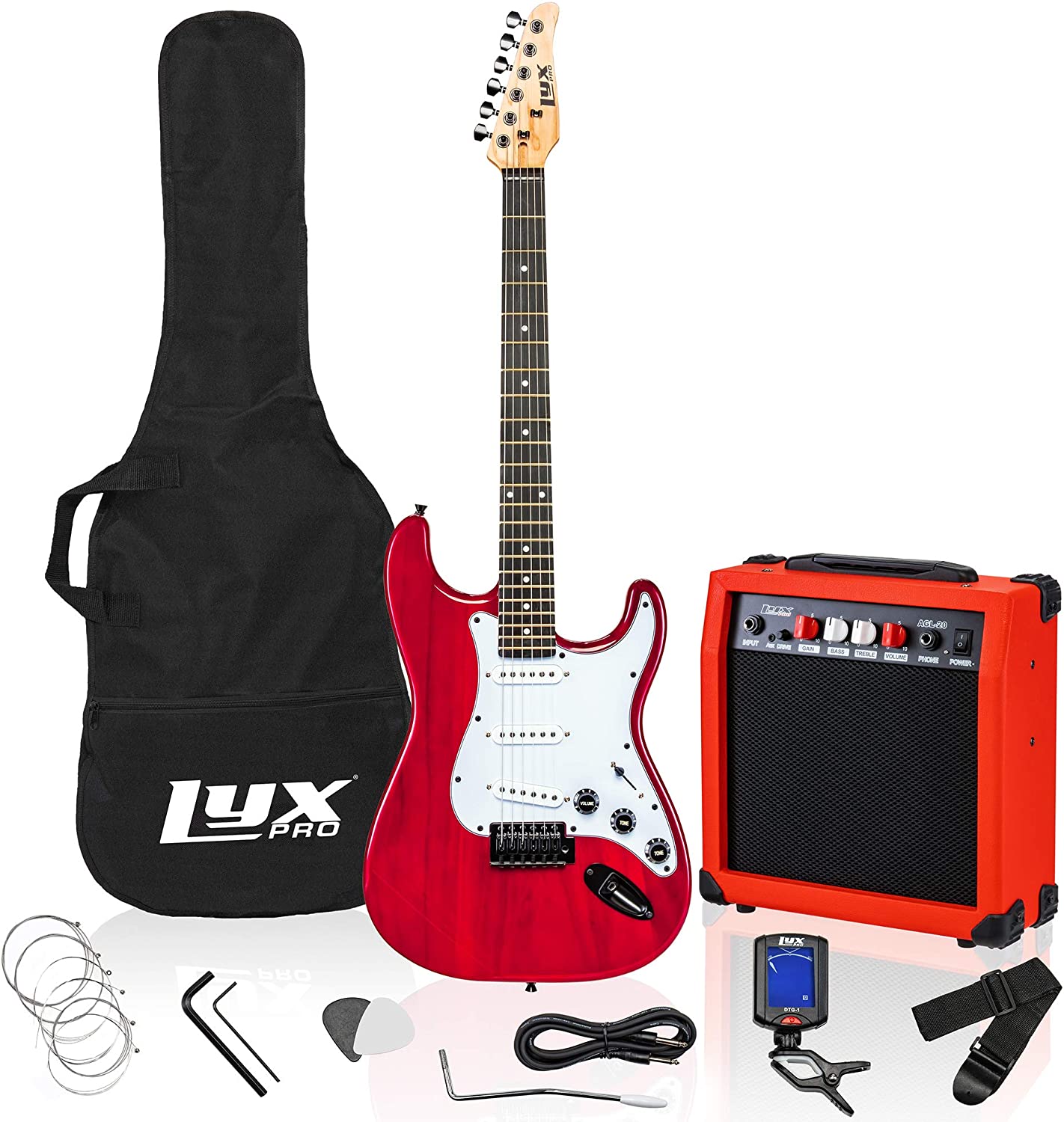 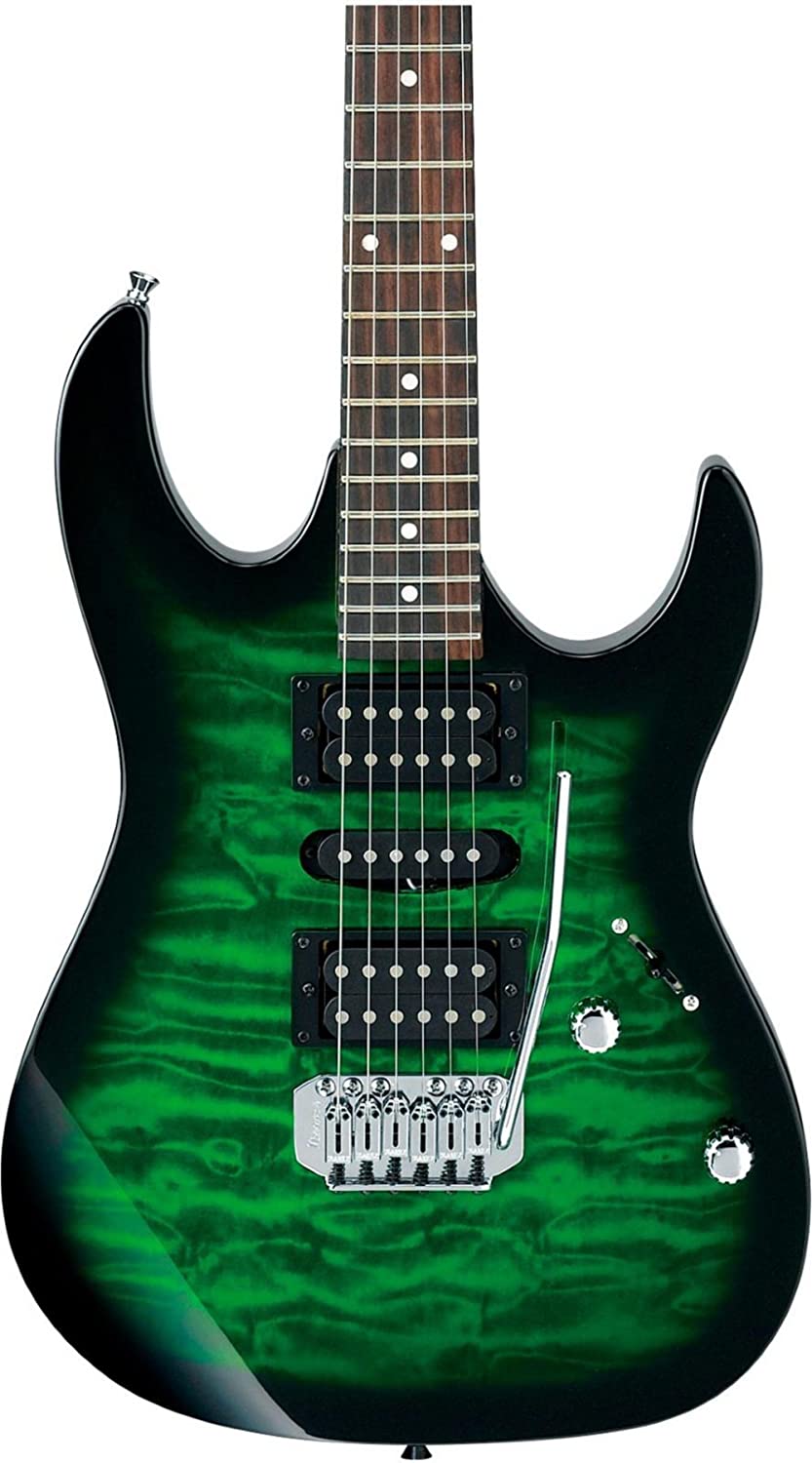 Are you ready to jam? The best thing about technology is how easy it is to get your hands on the best quality instruments. The best electric guitar for you will, of course, vary according to your personal choice. Whether you’re starting out discovering your musical talent, or you’re a professional guitarist, there is an option out there to make every musician sound their best. You need to consider the body shape, the locking trem, the tone, the quality, the size, and, of course, different price points when choosing the right electric guitar. Not all electric guitars are created equal, and balancing reasonable price with superior quality can be a challenge. To help you pick the right one for your needs, we’ve shortlisted the best cheap electric guitars bound to make you sound the best right here.

An electric guitar for kids, ideal for beginners, which has a length of 30 inch and 20-inch scale with 21 frets. It is a right-handed guitar with a battery-powered 5-watt amplifier.

It’s a full size 39″ electric guitar that has all the accessories necessary for beginner and intermediate players. It features a pickup selector switch, a volume knob, and two different tone knobs.

Bundle includes electric guitar, 3W MINI amplifier, good quality gig bag, guitar capo, DT-2 tuner, strings, strap and picks. The all-in-one electric guitar bundle will not only save you money, but loads of time as well! It includes a solid basswood body with fine arches and a chrome tuner key. Moreover, it features good quality brass strings and a PVC pickguard. The tuning pegs are constructed of steel to ensure ease in the tuning and to keep the tuned string held in position.

It’s a 39-inch electric guitar which features high-quality materials including a premium rosewood fingerboard, volume/tone, and knobs. It also has a 20-Watt amplifier with cable.

This Starter Package Includes Full Size Guitar, 20W amplifier, Digital clip-on tuner, 6 strings as well as 2 picks, Tremolo bar, Shoulder strap, carrying bag which is a perfect choice for Players. The amplifier has a speaker of 6.5″/ 4 ohm with equalization of treble, bass, gain, grind. You also get headphones with this guitar.

This popular electric guitar in color of transparent green burst with a fretboard material of rosewood and string material of nickel. Its guitar pickup configuration is a combination. The 5-way selector switch provides access to whatever tonal palette you need. The product dimensions are .39.5 x 12.5 x 2.19 inches and it weighs 7.5 pounds.

This poplar electric guitar has an SSS and HSS pickup configuration options. It has a neck finish of a satin and a fingerboard material of laurel and maple. Its bridge options are 6-Saddle vintage-style synchronized tremolo with cast saddles. The comfortable “C”-shaped neck profile of this instrument is sculpted to impart a vintage-style playing feel. It has an elegant gold and black two-color headstock logo lends a touch of class to this instrument.

If you’ve already mastered a classical guitar, then up your game and try an electric guitar. We know that picking one might not be the easiest task, so our guide is here to help you make sense of everything you need to know.

What are the types of electric guitars?

There are many types of electric guitars, but there are three main body styles you need to be aware of: solidbody, semi-hollow, and hollow.

These electric guitars are made from a solid piece of wood that can typically create a greater sustain and resistance to feedback, which means they are excellent choices for rock and metal guitarists who create a lot of distortion. There are a number of different body style variations within solidbody electric guitars, however.

These electric guitars feature an exposed opening at the top of the guitar’s body, typically in the form of two f-holes. A block of wood runs through the body of the guitar, dividing the inner chamber into two parts. The tone of these electric guitars is pretty similar to that of solidbody electric guitars, but they don’t have as much sustain. When played with greater distortion or at louder volumes, there also tends to be feedback because of how they are constructed.

That’s all the most important body styles of electric guitars that you need to know in order to make the most-informed choice out there.

What is the price range of electric guitars?

The price of an electric guitar is not the only expense you’ll encounter. In order to properly make use of your electric guitar, you’ll need to buy an amplifier and audio cable as well. The price of amplifiers, like electric guitars, can vary depending on which one you get, but they generally range anywhere from 40 to 200 dollars. Audio cables can vary in price, too, but you can get away with a good one for under 30 dollars.

You might not have to worry about finding and purchasing the accessories on your own, though, as many electric guitars are sold in kits that include things such as amplifiers and audio cables. You’re more likely to find kits for lower-end electric guitars than you are higher-end electric guitars, and while this might increase the price you pay, it reduces the hassle of having to buy every item separately.

The bottom rule, though, is that you should not only be aware of your budget when you go to purchase an electric guitar but also your skill level and interest in the instrument.

Start by considering your skill level. If you’re a more advanced player who is committed to the craft, it might be right to invest in a pricer electric guitar. If you’re just starting out, a less expensive electric guitar is fine, and you can upgrade later if you find yourself really sticking with it. On the same note, you’ll also want to consider what your budget is; regardless of how experienced a player you are, you don’t want to go into debt over an extremely nice albeit extremely expensive guitar. There are many suitable options on the lower price end that won’t break the bank. You’ll also want to consider what type of music you play (or want to play) on your electric guitar. That can influence the type of electric guitar you want to get, as different body styles come with different features that make them more suitable for some genres than others. If you want to play across different genres, then you’ll need to invest in an electric guitar that is suitable for that. You’ll find that some electric guitars might be better for you than others, so it’s important to keep in mind these things before you make your final decision. 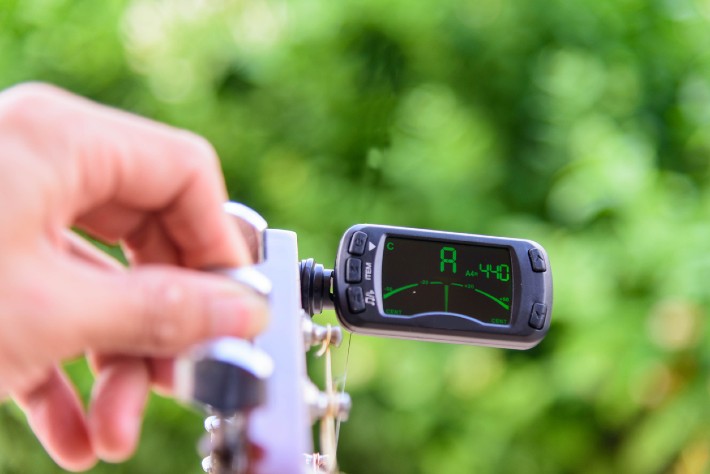 Stay In-Tune with one of these Guitar Tuners on Amazon

The Best Guitar Strings on Amazon 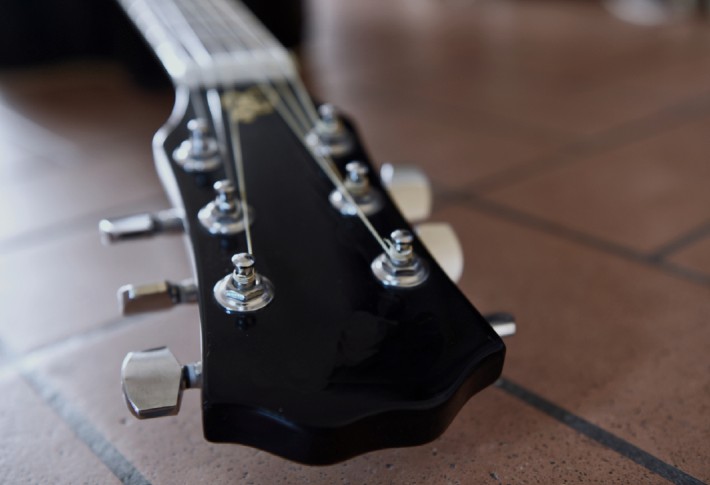