Get on Amazon and Grab One of these Drum Sets 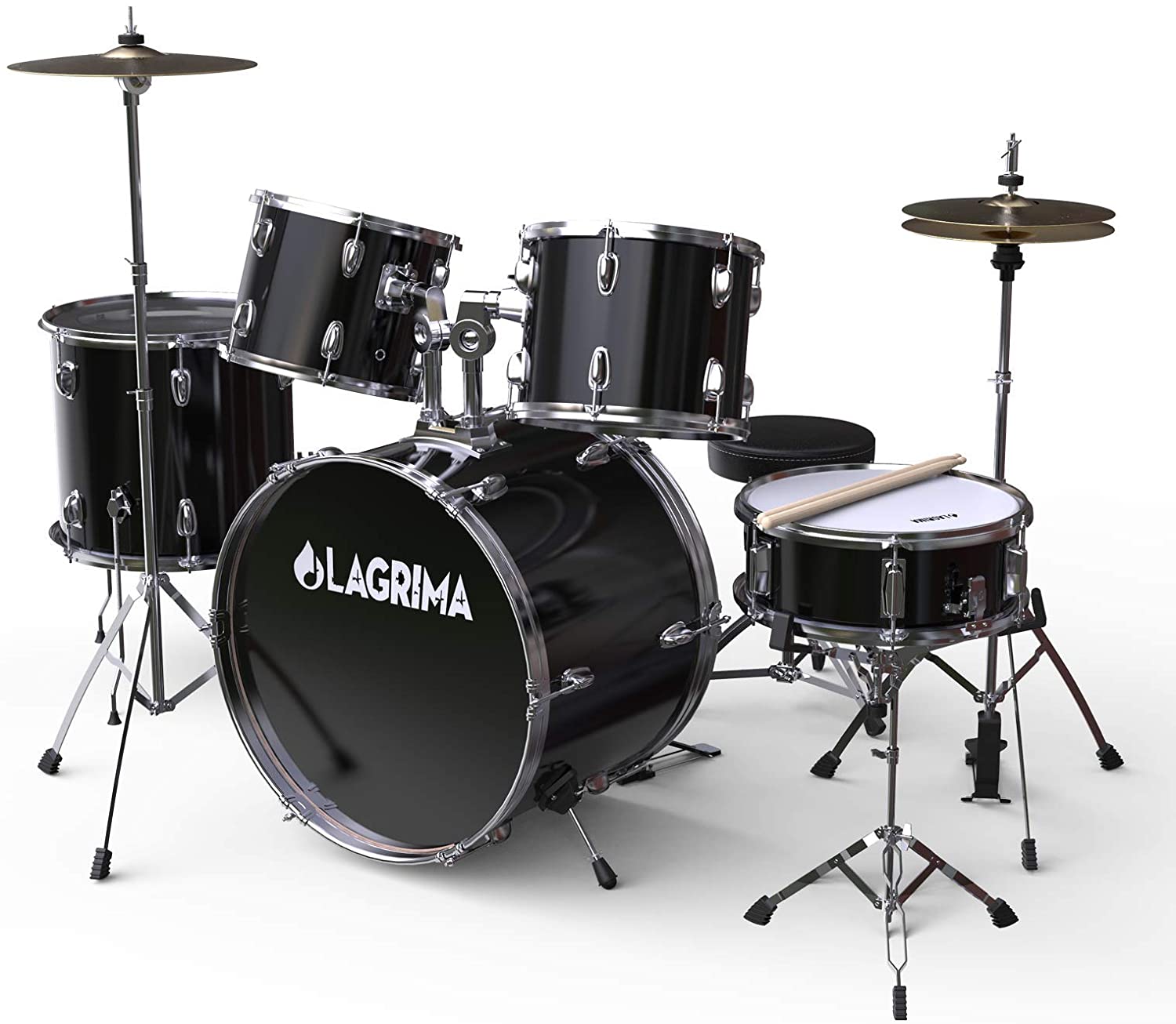 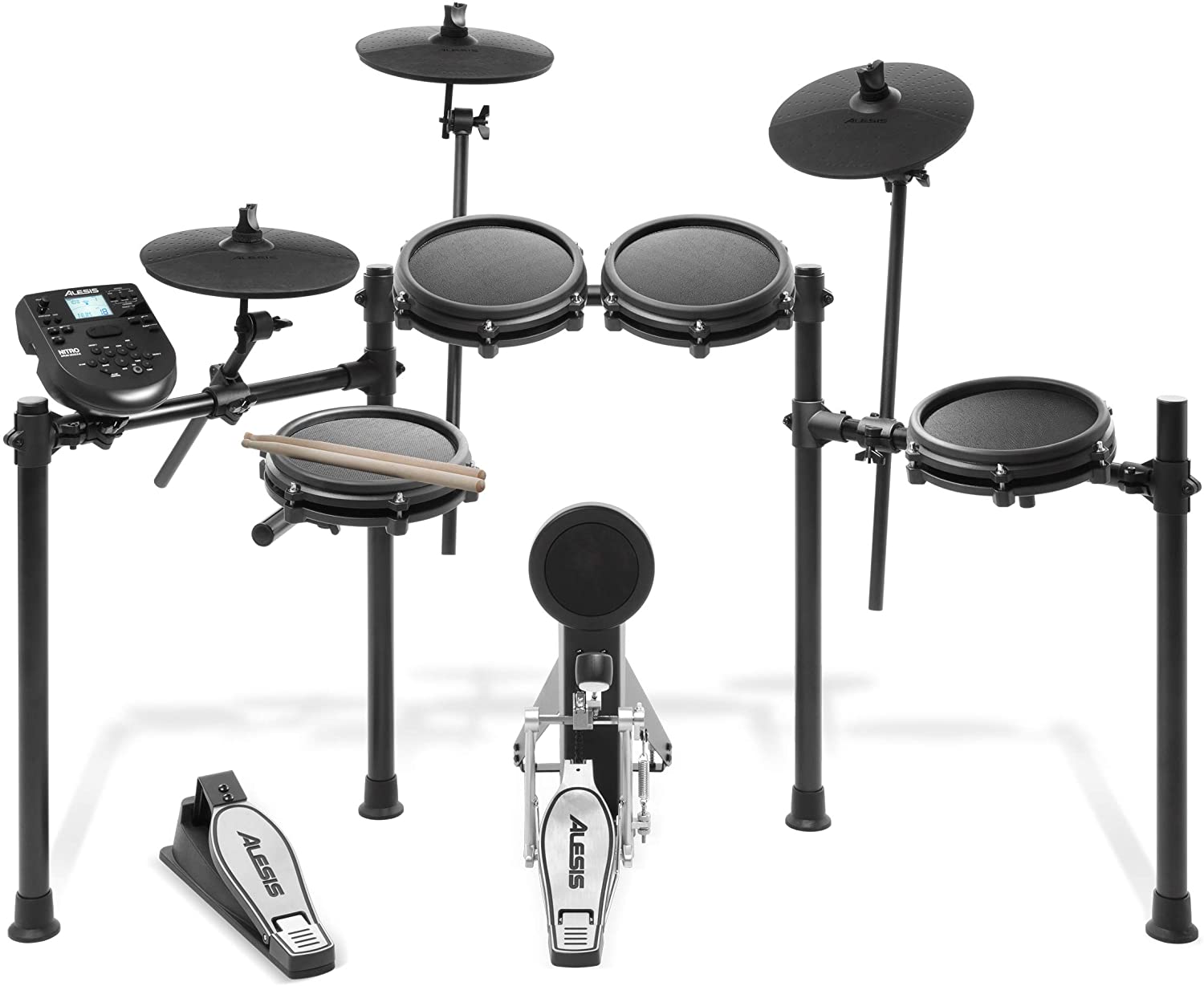 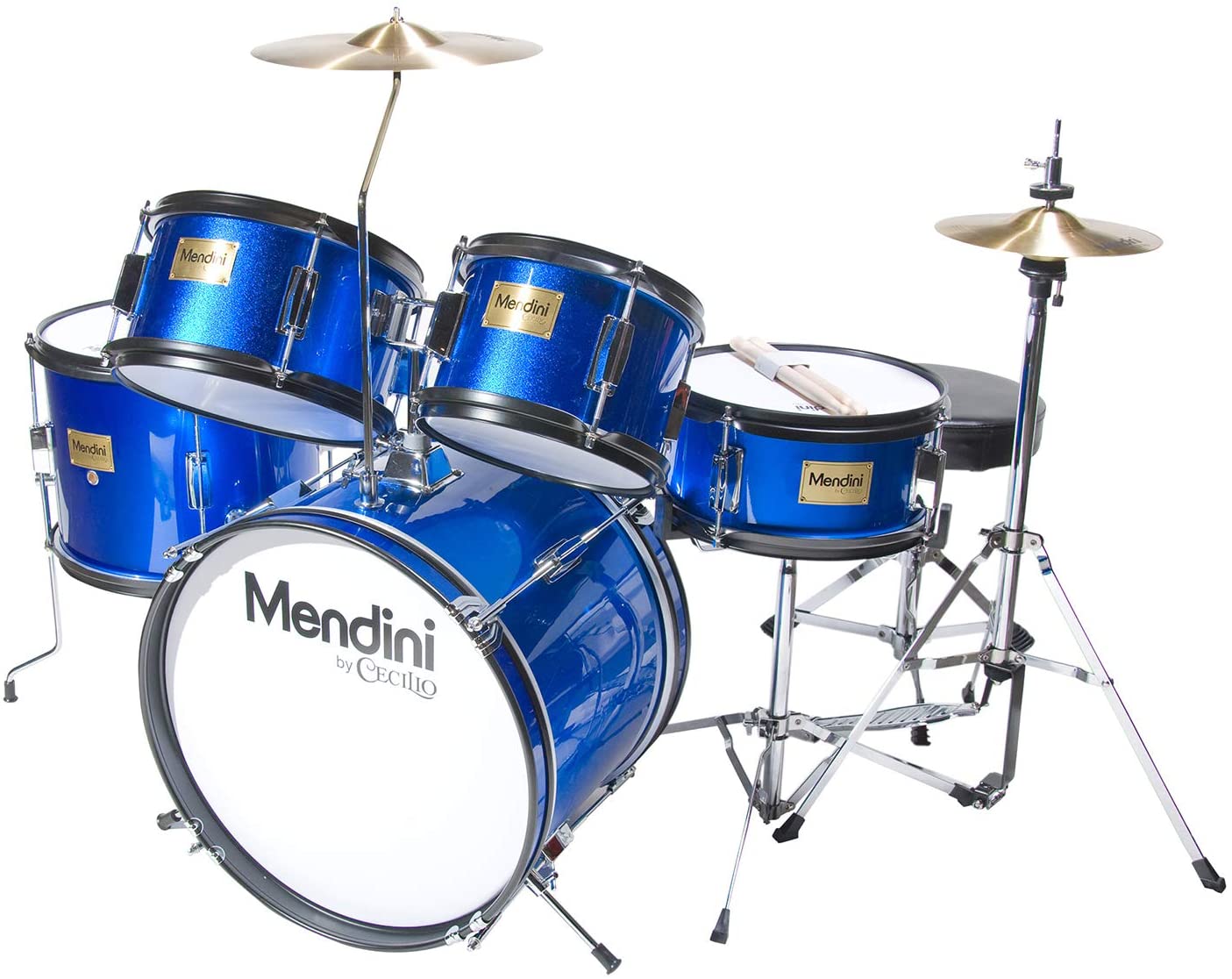 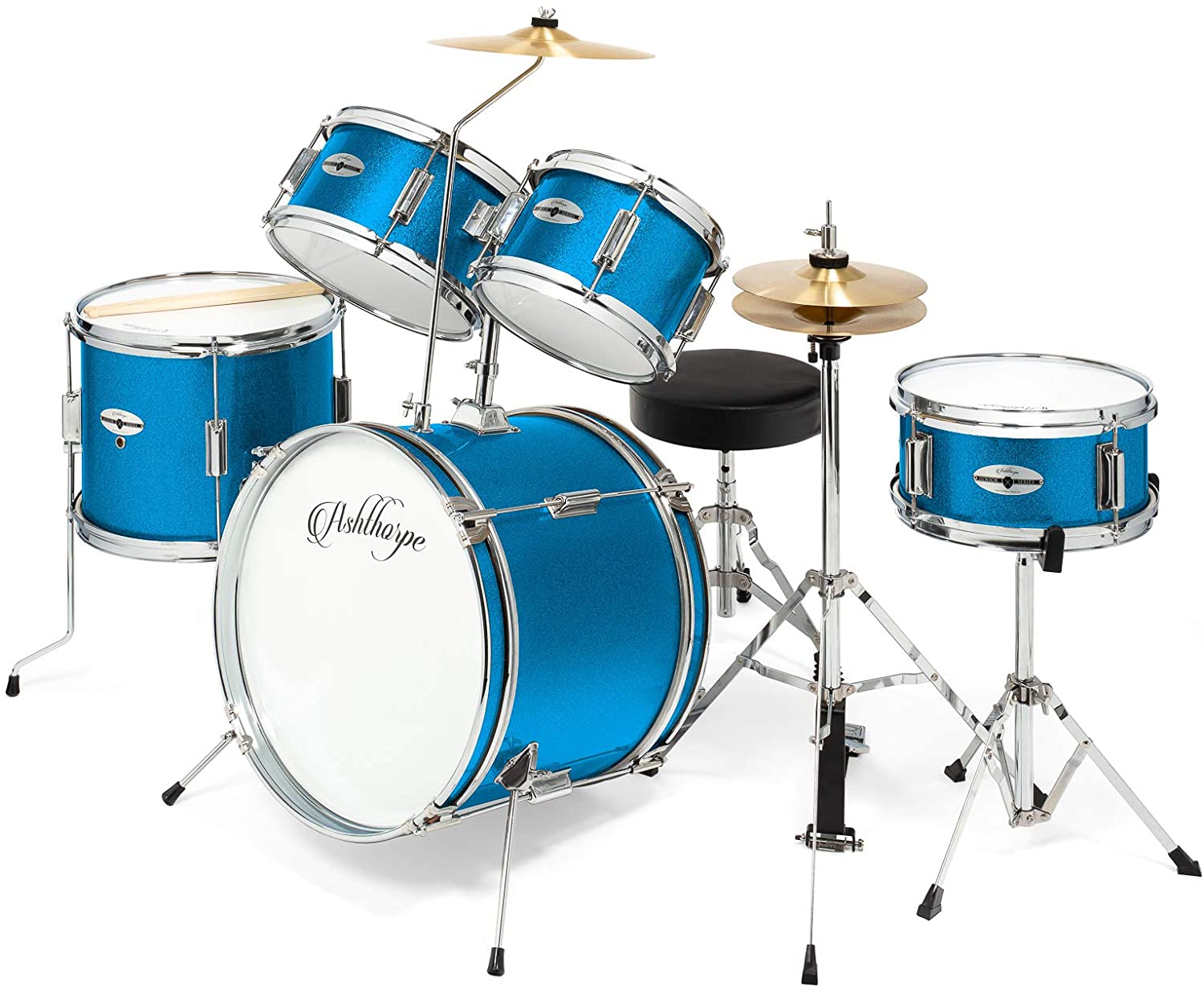 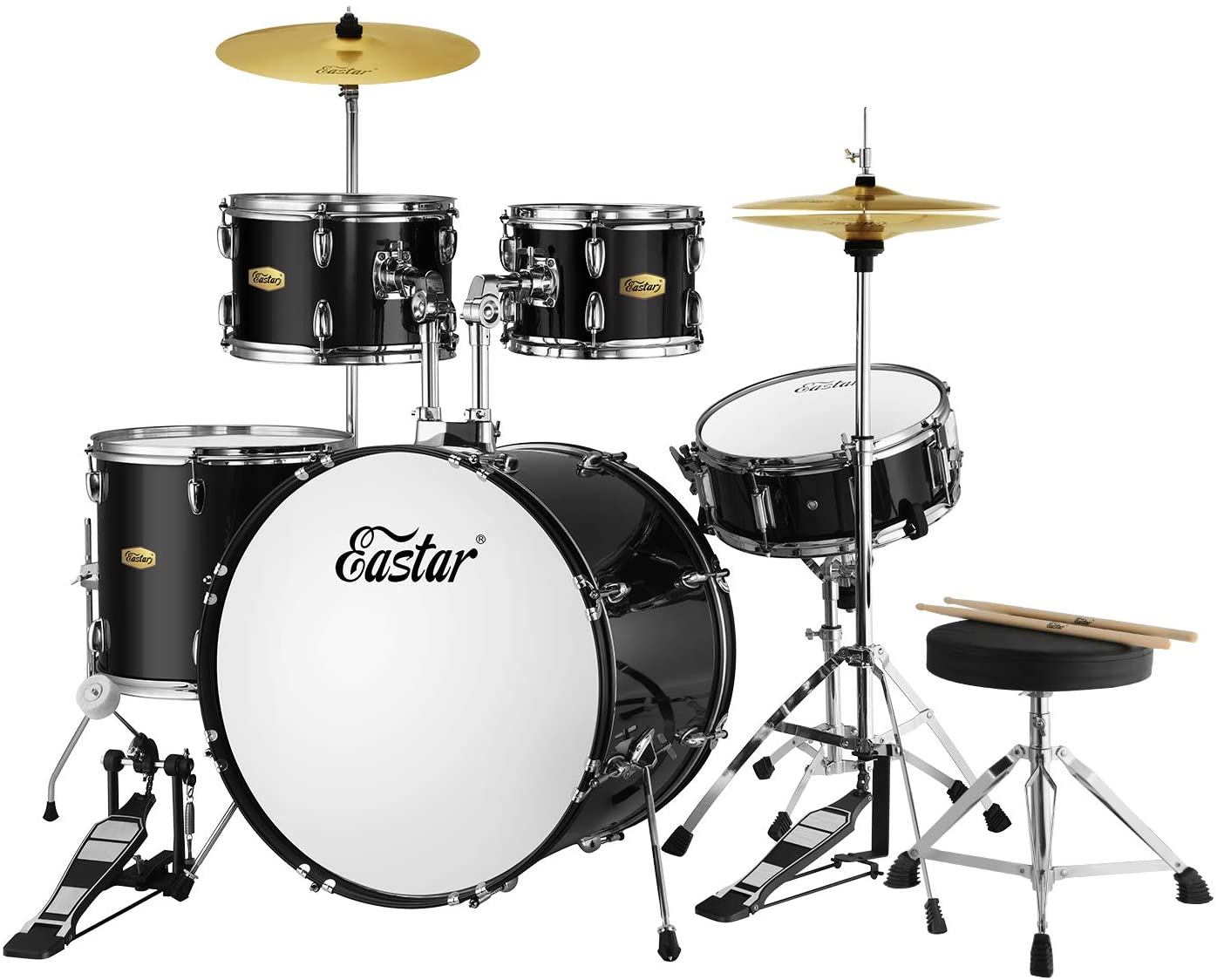 Choosing the best cheap drum set requires careful consideration of a few important factors, such as size, quality, comfort, durability, and appropriateness for your purpose. While you might be tempted to opt for a professional drum set with an individual cymbal stand, if you are a beginner and just starting to learn how to play drums, there are more suitable sets out there for you.

Our team has picked the following drum sets based upon a few factors, including their ease of assembly, size that’s perfect for all ages, beginner-friendly construction, comfortable stool, and use of high-quality materials in their construction. If you are a beginner, get on Amazon and grab one of these drum sets.

In need of other high-quality yet affordable instruments & accessories? Check out our other Drums & Percussion offerings to add to your collection.

The top-quality material used to make this drum set gives it a premium glossy finish and allows you to produce impeccable sound with it. Also, the set is very easy to assemble, so you don’t require any instructions to put it together.

A sturdy yet lightweight drum set kit for beginners with plenty of educational features.

The sound produced by this drum set is phenomenally immersive and highly responsive, making this a great choice for beginners looking for an enjoyable drum-learning experience. Also, the ability to connect headphones means you can play for hours without disturbing anyone else.

An all-inclusive drum set with height-adjustable seat and assembly instructions.

Your child will have a great time learning on this drum set, as it comes with all necessary components and accessories, including a drum throne and wooden drumsticks, that provide a professional-sounding experience.

A beginner-friendly drum set with all necessary components and hardware for a seamless learning experience.

This drum set has everything that a child needs to learn playing drums, including a bass drum, floor tom, mounted toms, snare, cymbals, a comfortably padded stool, and drumsticks, in addition to some useful hardware, such as an adjustment key, to tweak the drum sounds, ensuring an amazing learning experience.

– Best For All Ages

A sturdy and durable drum set with excellent sound quality and height-adustable size.

The high-strength evenly-vibrating sound produced by this drum set is exactly what you need to enjoy your drumming experience. Also, the accompanying drum throne is sturdily made, capable of supporting a total weight capacity of up to 330lbs.

What is the price range of a drum set?

Prices can vary for drum sets depending on a number of factors. The number of shells they include, the quality of those shells, the hardware and add-ons that are included, and even whether or not the drum set was handmade. If you’re looking for the price range of an average set of drums, they generally range from 300 to 1,000 dollars. Junior drum kits, because they are not as big and because they don’t have all the extra bells and whistles, won’t cost you as much. You can get a good-quality junior drum set for around 250 dollars. As you get into more intermediate drum sets, it is not uncommon to see prices increase to the higher end of the price range. With more professional drum sets, you should expect to shell out more than 1,000 dollars.

You’ll also need to think about other items you’ll need to spend money on. There are things you’ll absolutely need to buy, such as drumsticks, but there are other items you might need as well depending on your situation, such as a traveling case. Make sure you know your budget before you start your search.

Start by considering how large your budget is. This might also mean thinking about how serious a drummer you are. If you’re just a beginner, you might want to consider purchasing a less expensive set, even if you do have a large budget to spend on a drum set. We recommend that because the cool thing about drum sets is that you can purchase additional drums, cymbals, or percussion add-ons later and fit them to your set. Even if you are a serious drummer, there are a number of high-quality drum sets that won’t break the bank.

Next you’ll want to think about what you want in your drum set. Once you have an idea of your budget, you’ll be able to realistically decide what you can and can’t include. Most drum sets are either sold in what is called a five-piece or six-piece set, which means they will feature either five or six core drums. If you get an inclusive drum set, you’ll probably also receive a basic cymbal or two. If not, you’re probably purchasing what is called a shell set. In a shell set, you only get the basic drums and the holders, so you’ll have to decide which cymbals you want and factor that into your budget as well.

If you’re looking to take full control of your drum set and customize it to your needs, then a shell set is the way to go. If you’re looking to get a grasp on playing the drums or you simply just want a set, then a standard five-piece or six-piece set will work just fine.

As you begin your search, you will soon find that some drum sets are better for you than others.

What are types of drum sets?

While there aren’t many types of drum sets, outside of the acoustic and virtual drum sets, there are many different types of instruments that you’ll find within a typical drum set.

There are two types of tom drums that you’ll encounter in a drum set: tom-toms and floor toms. A tom-tom drum is a cylindrical drum that you can tune to different pitches. It has an open and sustained sound that brings color to a drummer’s performance. A floor tom, which is a double-sided tom-tom drum that stands on three legs, is similar to a tom-tom in the sound that it produces, except that it’ll typically be a lower-pitched sound.

The bass drum is probably the most recognizable of the drums in a drum set because it is the largest one and it sits in the center of every drum set. It is played not with drumsticks but with a mallet that is normally attached to a pedal. It is often used to keep time and makes a low, booming sound.

A snare drum features wires made out of plastic, metal, nylon, or gut that are called snares, which run along the bottom of the drum. When the drum is struck, it produces a sharp, cracking staccato sound.

A ride cymbal is one of two cymbals that you will find in a standard drum set and it’s normally the largest cymbal you’ll find on a drum set. It is used to play steady, rhythmic patterns and creates a sustained shimmering sound, but this can change a bit depending on where you actually hit the cymbal.

Hi-hats are actually two cymbals mounted onto a stand and connected to a pedal that you press with your foot to open and close them. Depending on how you have them positioned, the sound they produce changes. When not touching and open, hi-hats are a great accent piece to a drummer’s routine, creating a sound that almost sounds like a sizzle. When closed, they can produce anywhere from a crisp, soft sound to an aggressive metallic sound; the sound will depend on the type of hi-hats you have.

That’s all the main pieces of equipment that you will encounter on a typical drum set, but more customized drum sets will surely include other pieces as well.

Got the drum set but missing the drum sticks? Check out our favorite affordable drumsticks here.

By Derek Sautter
Derek is a professional musician who specializes in percussion and works with the independent WGI group Cap City Percussion. With a Bachelors of Music from Capital University, specializing in Music Industry studies, he consistently finds himself playing and teaching percussion to anyone who has the will to learn. Derek is also a former member of DCI groups Legends (2014-15) and Colts (2016-18); he is also the percussion technician and instructor of the drum line at Olentangy High School. You may find him playing a gig throughout the greater Columbus, Ohio area.
You May Also Like 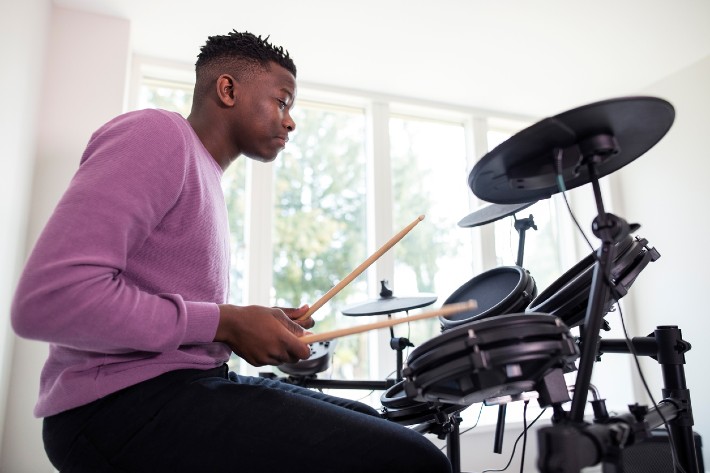 Grab one of these Cheap Electronic Drum Sets 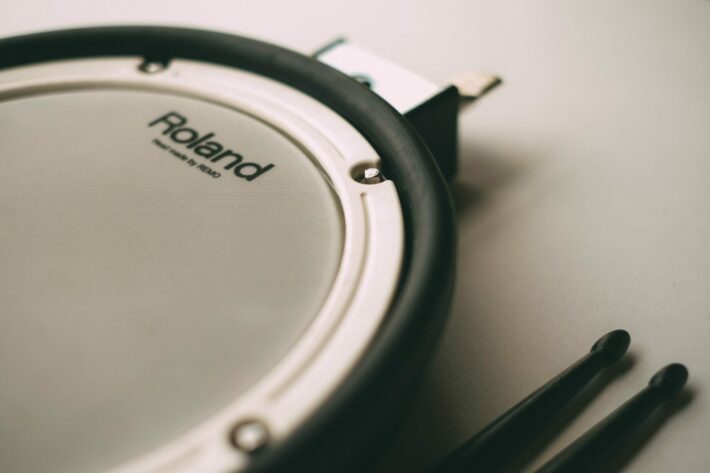 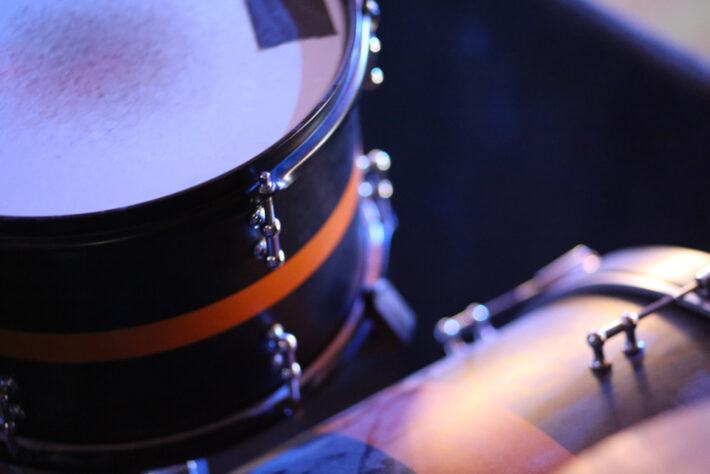