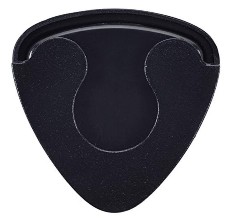 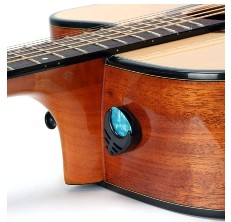 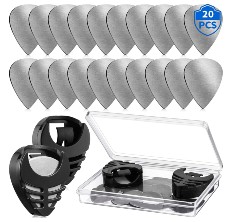 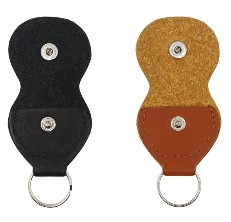 I'm sure we can all relate to losing our guitar plectrums one after the other. We've all been there - some of us even came up with actual solutions to not losing the picks. And to be fair, from putting them in our wallets to storing them in our guitar bags, we did try many ways, and sometimes, they did work for a while but frankly, none of them was really hassle-free, flawless, or a lasting solution. While we were all carelessly suffering to and fro through our passionate years of shredding cool riffs and losing our guitar picks, some genius minds out there thought of a pick holder and how you can just attach one of those to your guitars and never lose your picks again. Legendary move. If you still aren't introduced to this miraculous little invention, we're bringing you a list of some unrivaled guitar pick holders for 2021.  Not only are they cheap, budget-friendly, but they'll finally help you keep your picks nearby at all times so you never misplace them!

We've zeroed in on multiple types of pick holders to make sure that nobody feels left out. Let's get started!

Available as a single item or in a pack of three, this guitar pick holder is sleek and helps keep picks nearby. It’s made up of plastic and sports a black color. Moreover, has a strong adhesive back so you can attach it to your cupboard, bedside, or our favorite; just below the fretboard on your guitar’s body.

This cheap guitar pick holder is made from celluloid, a premium material used for picks. It’ll let you store 10 picks; four of 0.46mm, 3 of 0.71mm, and 3 of 0.96mm. Moreover, the Lesun pick holder comes with an easy stick-on that lets you attach it to your guitar or anywhere in your room!

If you’re looking for some picks as well as a guitar pick holder, get your hands on this handy set. It comes with 20 stainless steel picks (0.3mm) and 2 pick-holders big enough to house 3-5 sheet picks. The metal picks allow you to have a bunch of them at hand, so you have backup whenever you lose! The best part? You can use them for bass guitars, banjo, acoustic/electric guitars, and more!

If you aren’t used to losing your keys, get this case to stop losing your guitar picks! It’s made up of high-quality PU leather in a fashionable keychain appearance. One pack will include 2 leather cases for guitar picks.

Frankly, if you aren’t fond of the other pick holder that attaches to your guitar, get your hands on this one right away! 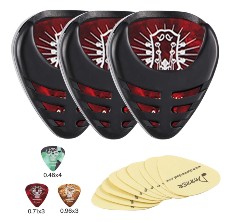 This set comes with 3 self-adhesive guitar pick holders, 10 celluloid guitar picks, and 9 extra 3M stickers. The holders are sturdy and have ample space to house around 10 guitar plectrums easily. The best part? You can easily remove the holder and relocate it because of the extra back sticker it comes with. 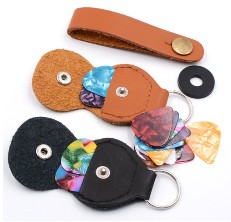 This nice set of pick holders from Sound Harbor comes with two cases. The best part? In addition to the pick cases, you get 24 guitar picks in this $8 set. You’ll be getting one of the cases in black and the other in orange color. 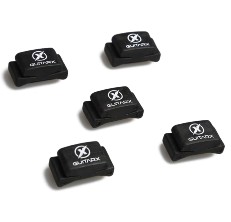 This very unique guitar pick holder comes in a set of 5 and each holder can store 2 picks. It hangs just right on the neck of your guitar, beneath your D and G strings. Folks who avoid attaching self-adhesive pick holders on their guitars or don’t appreciate the one with a keychain, you can get your hands on this unique, minimal pick holder. 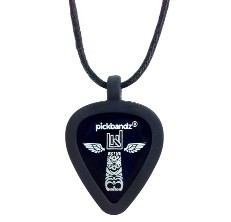 This pick holder is made of premium silicone that is scratch-resistant and offers strong and reliable support for most guitar picks. It’s actually a guitar pick pendant with a double-sided design that allows you to hold two of your favorite picks at once! Moreover, it’s made up of surgical-grade silicon and has a patented design. 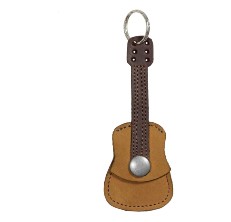 It’s sturdy and has a soft suede leather touch that makes it rustic and classy. Moreover, you can easily store around 3-4 picks in this picks pouch. 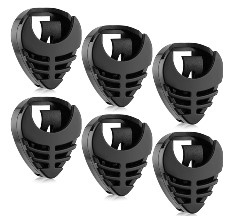 The most cost-friendly picks holder in our list – the Frienda’s set of 6 stick-on pick holders is unrivaled. It’s suitable for different gauges of guitar picks and made up of quality, durable plastic. There’s a fine adhesive at the backside, making it widely applicable to multiple materials. Last on our list but the opposite of least!

Guitar picks, also known as sneaky little rats, are an accessory used in plucking/strumming your guitar strings. They’re a simple-to-buy gadget but as we’ve mentioned above, learning to store them safely is the real deal.

We’ve hooked you up with some excellent choices for guitar pick holders above that can do the job flawlessly. This particular section will shed light on a few other basics that won’t only help you with your purchase but will also answer the most frequently asked questions about guitar pick holders. Let’s get started!

If you’re a beginner, you may wonder - why do I even need a guitar pick holder to begin with? I barely use the plectrums and I don’t think I’m ever going to, so what’s the point?

Well, if you’re serious about playing guitars, you’re going to be using guitar picks at some point in your career, and here’s why: you get a very unique, crisp plucking sound out of a guitar pick, as compared to fingerpicking. In fact, both the techniques to pluck/strum the strings have one purpose - to get clear, crisp, and distinguishing sound frequencies. When you’re working in the studio, on a stereo track, you need differentiating frequencies to create a nice width in your mix - that’s when you use picks in combination with fingerpicking.

Similarly, if you’re playing with another guitarist, you may want to create a nice, diverse live acoustic sound, instead of the same plucking and strumming.

This argument settles the guitar picks vs. fingerpicking debate, once and for all. Hence, generating the need for a reliable pick holder that can store your precious collection. So, if you’re one of those guys who think they don’t need a pick holder - wait until you’ve lost some, maybe around 20 of them. Everybody on the other side has learned it the hard way.

At times, you get these picks as souvenirs for your certain tours and gigs, and that’s when they serve as a memory token and beg for a nice storage place so you can look at your collection when you’re old but young at heart.

How to Know if Your Guitar Picks Will Fit in the Holder You are Planning to Buy?

More often than not, every guitarist will have a couple of guitar picks of varying thicknesses. So, choosing the correct size isn’t really a problem because everybody is in the same boat. Who’s their knight in shining armor then?

Well, if you’ve checked out the aforementioned holders, you’ll find them to be generic designs that can fit picks of any thickness.

For instance, if a holder is big enough to store 10 picks of 0.96mm thickness, the exact pick holder will be able to store 5 picks of 1.88 thickness. Get the deal?

So in short words, look for the pick holder's details in product descriptions. You’ll find that most manufacturers have already explained the types of picks that a certain pick holder can fit.

It will have a good adhesive

If you’re planning to go for the traditional stick-on pick holder, it must have a good adhesive. The ones with poor adhesives will come off, leaving a mark on your guitar’s body and that’s no good to anybody.

It will be durable

Your ideal pick holder will not just break apart easily. It’ll either be mounted to a nice spot to not get hit or it’ll be sturdy enough to take a hit or two and still be intact.

You will not lose it easily

What good is a guitar pick holder if you end up losing it? That’s why they’re made to be anchored to other objects - such as a stick-on holder, a necklace pick holder, or a keychain pick holder. That way, you only lose your picks if you use the other major object, which will most likely be a very rare happening.

You’ll be able to store multiple picks in it

You’ll find most guitar pick holders to be housing at least two picks. So, if you lose one of the picks, you’ll always have a backup.

Q: What is the best mounting place for a guitar pick holder?

A: Your guitar! You need the picks while playing the guitar so it only makes sense to mount the holder to your guitar so your picks are at your hand’s reach 24/7.

Q: Can I make a guitar pick holder at home?

A: You can get yourself a DIY guitar pick holder easily - get yourself a piece of plastic, plastic sheet, or any piece that can house a few picks securely. Get a rubber band and wrap the thing around on your guitar’s head. 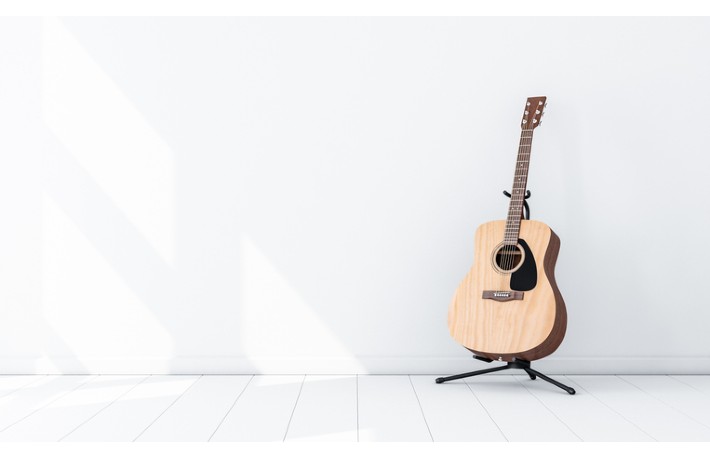 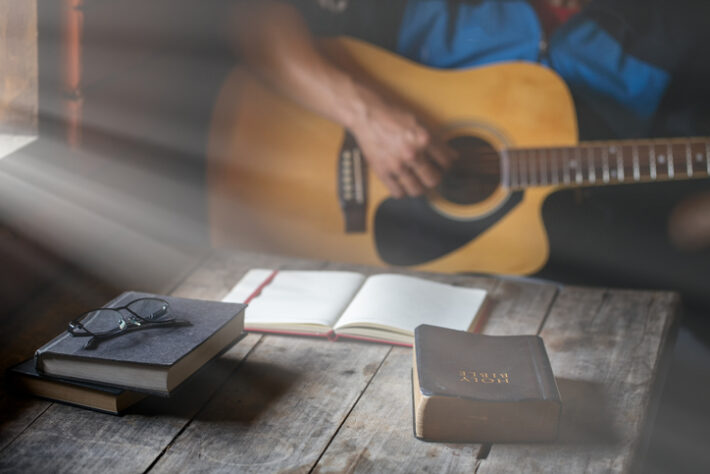 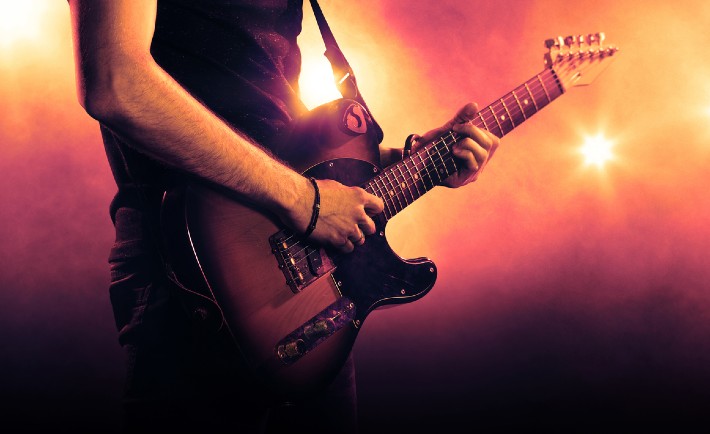 The Best Electric Guitars for Beginners