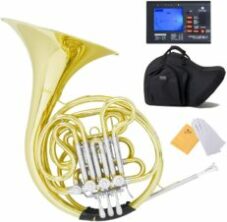 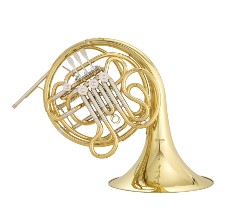 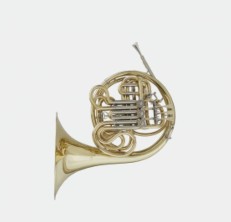 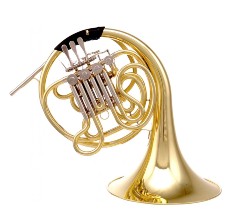 Decided to pursue the horn for the long term? The English contender wasn’t just cutting it? Well, it makes sense since the French horn lets you grab a bit of everything, from mellow and soft to smooth and roaring. That clunky, dried-out Holton you may have played all through your school years or the lucky local horn that accidentally happened to sound like a dream doesn’t just cut it anymore. You need something that will last you a while. So whether you’re an experienced player, a beginner, or a parent looking to buy one for their child, we’ve got your back. This is a detailed review of the finest french horns for 2022 and we’ll back our research with a comprehensive buyer’s guide that’ll further help you ease into your desired purchase.

Confused about where to start? We’ve got you.

The Finest French Horn Models of 2021 in Detail

This double french horn sports a lacquer yellow brass bell and body, has 4 solid rotors with string lever action, and comes with all the required bare essentials. The horn comes quality-tested at Cecilio’s facility and comes with a year’s warranty!

Loaded with its original silver plated mouthpiece, the ESD810 has a very typical nice sound. The best part? Its combination of Bb and F horn offers the players excellent flexibility in intonation and tonal projection. Moreover, the french horn comes in a high-grade luxury case. It’s an excellent entry-to-intermediate level horn to get your hands on.

The BFH-1460 comes equipped with the Blessing MC french horn mouthpiece and comes packed in a C-1460FR ABS molded plastic case. Our favorite thing about this horn is that it offers this blowing resistance that’s excellent for a learning hornist. Moving from band and orchestra and through the chamber music settings, this horn is perfect for a number of demands!

The LV-HR4525 double french horn by Levante offers a string mechanism, has nickel silver slides, and comes with a light case. Plus, the clear lacquer finish makes it look really fresh and appealing for a budding hornist’s choice! 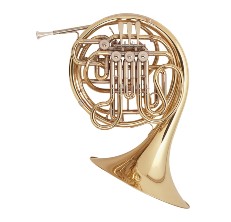 Tired of your old Holton? Planning to buy one for your kid? Get this Bb/F, hand-hammered French horn. It has a large yellow brass bell throat that produces a higher tone color and excellent overtones for crystal clear projection. Why are we sold on it? Well, if anybody needs to practice the pianissimo staccato notes, this one will help you get it done clearly and evenly! 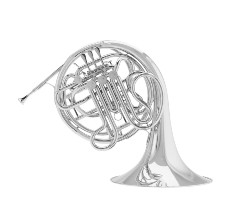 The 8D Conn from the CONNstellation series is one of the most popular french horns out there. So if you’re looking for a professional horn, you’re up for an open, dark sound with a subtle response. It has a bore that’s around .5” (a bit less) – excellent for intonation and control. While it’s a very decent horn, keep in mind that it may cause the player inconvenience in the upper registers. 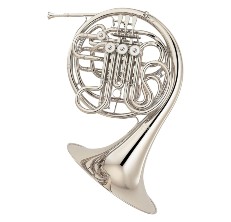 Last on our list but the opposite of least – we saved the best for the last – the YHR-6689II is made from brass and nickel, offers dead-accurate intonation, and feels like a dream in your hands! It costs about $4500, is the most high-end french horn on our list, and for all the right reasons.

Finding a good instrument online is no less than a gamble - at least when you’re in a music shop, you actually get to play the instrument before paying for it. When you’re buying online, it’s always pay first, play later, and deal with frustrating problems even further late down the lane.

Therefore, it’s always a very smart idea to research well prior to buying. Look up the YouTube reviews or scour through the customer reviews to figure out how the instrument you are planning to buy actually sounds.

We’ve broken down most things about the french horns we’ve reviewed above. In this section, we’ll fill you in generally on a couple more things about French Horns so you’re well-equipped and up to pace for vetting them yourself from now onwards.

What is the Difference Between an English Horn and a French Horn?

That’s a great question and here’s even a better question: Why do we call it french when it’s not even french at all?

The horn is traced back to the 16th century when hunters from France and Germany used hunting horns. From this hunting state, the horn evolved into a proper brass musical instrument. The modern design of the French horn was done by German horn makers and most French horns today are remodeled after that design.

So to climb back onto the original question; most Americans confuse the English horn with the French horn and it’s not until the high-school or college years that they figure out the difference between the two.

Well, the French horn is widely used in bands and orchestras (not brass brands). The English horn is an angled horn, sort of like an oboe but about 50% longer. It’s pitched a perfect fifth lower than an oboe.

If you’re looking to spot a similarity between the two, well, the only similarity is that they’re both pitched in F below the concert C pitch - so in an extreme pitch, a horn will probably be able to cover the English horn’s parts.

Are There Multiple Types of French Horns?

It all started with horns without valves, then came the valves-integrated french horns in the 19th century. The initial ones came in the F tuning, followed by them appearing in a B flat side to the F side. This was particularly done so the musicians were able to be more versatile and produce tonal diversity in their pieces.

Some Interesting Facts About the French Horn

Things to Consider When Choosing a French Horn

If you have never bought a french horn before or if you need a reminder of what to look for when you’re buying one, here you go:

The bore size affects the sound projection and somewhat defines the pitch. The cylindrical tubing of the horn, aka bore size, should be anywhere between .450 and .472 ideally. A horn with a large bell throat will always have a large bore size, and vice versa.

The area where you place the hand when playing the french horn is the bell throat. If your bell throat is small, it’ll result in timbre being less resonant and thinner, however, it’ll make the horn easier to control.

The important thing to remember: French horns with large bell throats produce a warmer sound and those with small bell throats tend to move towards progressively brighter tones.

A horn should come with a carry bag (soft/hard case), a pair of gloves, mouthpiece, polishing cloth, piston oil, etc. The more the extra products are, the better is your deal! So make sure you try to bundle all those things in at the time of your purchase.

Any instrument, whether brass or wooden, will always be indebted to its materials to define the quality of its sound and durability.

The most popular material for french horns is the yellow brass - it has a very snappy resonance, warm, medium-dark sound, and is pretty tough. It can be pushed to produce relatively brighter tones as well.

Nickel-silver is another material and is the toughest of them all. It helps create a bright sound and that’s exactly why most nickel-silver horns have large bell throats.

Then there’s rose brass which isn’t the toughest of materials but it helps produce dark tones.

The rotors are designed to connect multiple tubes together. The linkage is either mechanical or string. However, things are a bit more technical here for beginners to get a grasp of.

Here’s what you need to know though; string linkages are the quietest, however, you’ll need a replacement in case the string breaks. Mechanical linkages, on the other hand, are a better option since they don’t need replacement and aren’t that noisy either.

Q: Should I go for lacquer or non-lacquer body when buying a french horn?

A: The rumor has it that lacquer can dull the sound. Although there’s not enough evidence to prove it. If you’re a beginner, don’t worry about it. If you’re a student or a professional who doesn’t like maintaining their horn a lot, don’t go for the lacquered option.

Q: How much do French horns cost? 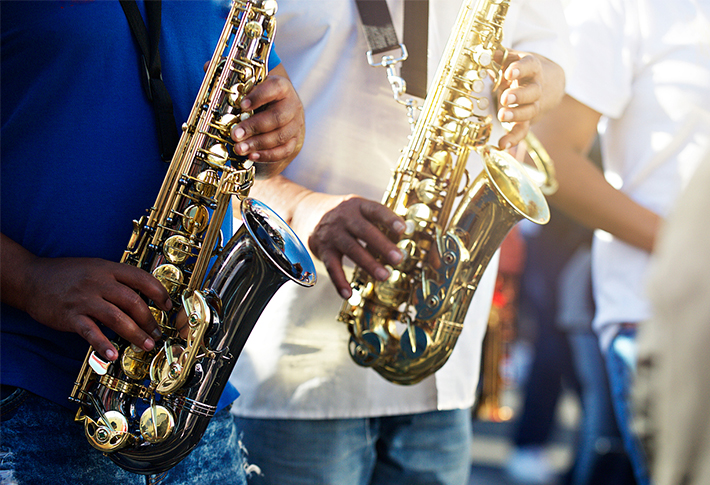 Check out these Beginner Saxophones 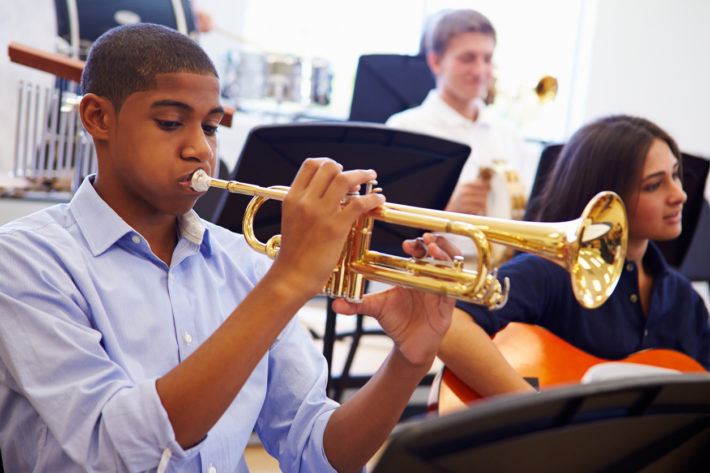 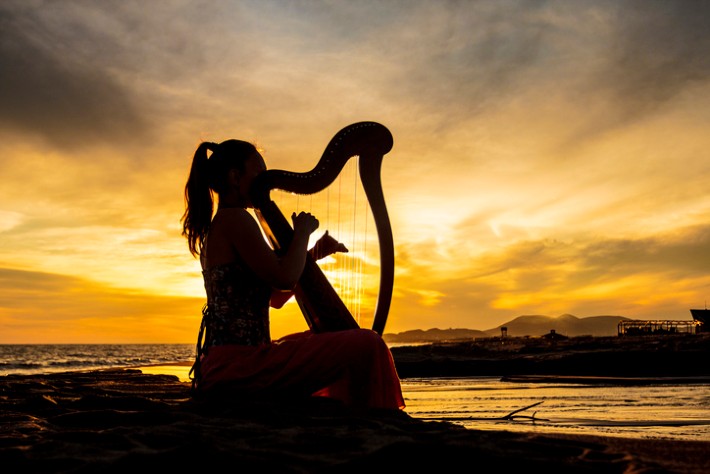