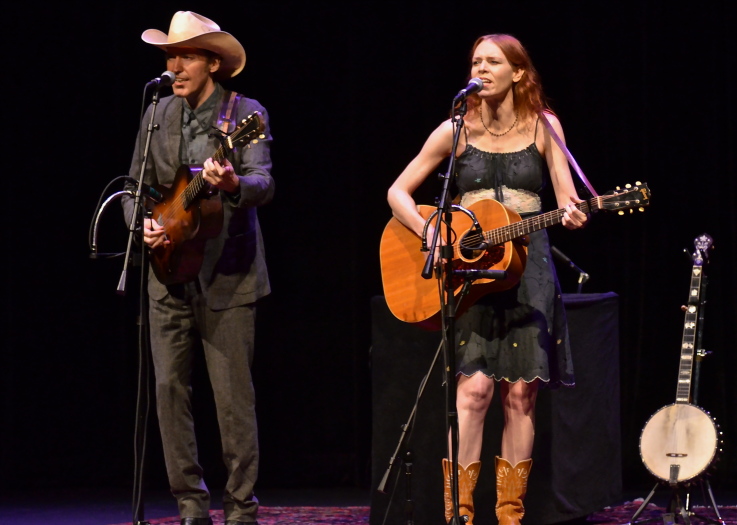 For Gillian Welch guitarist Dave Rawlings, much of the duo’s first set at Nashville’s famed Ryman Auditorium felt like a nightmare, albeit a sonically pleasing one . “Every time I step up to the microphone, my guitar goes out of tune,” said the nervous picker, “this has never happened to me.” Also, Robert Plant was in the audience, along with Patty Griffin and Buddy Miller. The pressure, as they say, was on.

Believe it or not, this was the first time Welch and Rawlings, longtime Music City residents, had played a solo show at the Ryman — they’d stood on it’s stage many times, but usually as part of The Grand Ole Opry. Expectations were high —  the Americana duo had been touring for six months behind The Harrow & The Harvest (their first proper album in eight years), and Nashvillians had been anticipating this tour stop since June. And when it comes to Gil and Dave, nothing short of magical will do.

Rawling’s technical difficulties, which were thankfully audible mostly to him, didn’t prevent the pair from turning in a show for the ages. Of the many concerts I’ve seen at the “Mother Church” over the past two years (from Alison Krauss to Bob Dylan), something about Gillian Welch and David Rawlings’ appearance felt the most appropriate for the storied venue, which once hosted the great sepia-toned country stars of the ’50s and ’60s.

Then there’s the songs on their new album, which could cast an old-timey spell over the modernest of men, and concern everything from mules to moonshine. The set list borrowed heavily from The Harrow & The Harvest, which made for a fresh and rewarding listening experience for longtime fans. The new songs turned Welch’s older body of work — “Look At Miss Ohio,” “Orphan Girl,” “Revelator” — into greatest hits, instead of concert staples.

And they helped spell out what Welch and Rawlings do so well — make music that sounds like two instruments and two voices are all you’d ever need. There’s the perfect, unmatched alchemy of their acoustic guitars — hers, metronomic and steady — his, bluegrassy and batshit crazy — and the heavenly meeting of their intertwined voices. For Gillian Welch and David Rawlings, two is the loneliest number.

Special moments abounded — the slightly rattled version of “Elvis Presley,” played faster than on record, in the first set; the hometown response to “Tennessee” in the second set; and “I Want To Sing That Rock and Roll,” which was delivered with a slower tempo than usual. “We recorded this song right here on this stage, during the Down From The Mountain concert” explained Welch beforehand, “and it was so good we used it on the record.” “No pressure,” quipped Rawlings. Welch dedicated “Red Clay Halo” to David Conrad, who gave her her first job in the music business, as a songwriter. She also picked up Rawlings’ famous 1935 Epiphone, for an improvised ditty. “This is what Dave’s guitar sounds like when it’s not played by someone like Dave. I think this will be illuminating to some of you.”

While we could have listened to them play all night, the show had to end — appropriately, with the new song “The Way The Whole Thing Ends.” Except that wasn’t quite it. The duo, who’d been Bonnie and Clyding their way across the country for months, quickly transitioned into a raucous cover of Johnny Cash’s “Jackson.” It was the third time I’d heard a Cash song performed at the Ryman in a month (see: String Cheese Incident, Brandi Carlile), and the best.