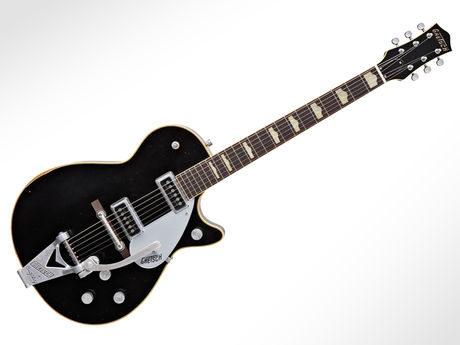 How did George Harrison get his electric guitar sound on early Beatles recordings like “Twist And Shout” and “Please Please Me”? That twangy open chord rock and roll riffing is coming from Harrison’s 1957 Gretsch Duo Jet, which you can see him playing in an early video for “Twist And Shout.”

Now, to honor the late Beatle, Gretsch Guitars is introducing a signature model of Harrison’s Duo Jet. It’s part of Gretsch’s Professional Collection, which has offered a slew of models bearing the names of iconic Gretschers like Brian Setzer and Chet Atkins.

Gretsch first paid tribute to Harrison with a Signature Duo Jet limited to just 60 models (at $20,000 a piece), but now they’ve added the Harrison model to their main line of guitars at a more affordable (but still formidable) $5,000 price tag. It’s efficient timing, as the late guitarist’s estate prepares for the Martin Scorsese-helmed doc (Living In The Material World) and vintage Harrison pics dot music magazine covers.

Harrison’s history with his first Gretsch– later on, he played the Country Gentleman and Tennessean models — is one well worth telling. After seeing the guitar advertised in a newspaper, Harrison bought it second-hand off a Liverpool cab driver and erstwhile-sailor in 1961 for £70 and a £20 “I-owe-you.” The Duo Jet has a special place in the early-hype Beatles era: Harrison lugged it off to Hamburg and also played it on many a wild night at Liverpool’s Cavern Club. By the time the Beatles were recording their first singles in 1962 and hit Abbey Road to record 1963’s Please Please Me, it was his main axe.

Gretsch’s signature collection Duo Jet is based on the original ‘57 that Harrison owned. (He later gave the guitar to his friend Klaus Voormann, though it was returned to Harrison in the ‘80s; he can be seen with it on the cover of his solo album Cloud Nine.) The guitar is constructed with a maple top and a semi-hollow chambered mahogany body. The mahogany neck boasts a lovely rosewood fretboard and has the “hump block” pearl inlays that make a nice addition to any Gretsch.

The signature model is outfitted with a Bigsby BC3 vibrato tailpiece, though the Bigsby addition was in fact a modification made to the original ‘57 Duo Jet before Harrison bought it. The Bigsby vibrato arm is practically a must for any Gretscher, and no other guitar-whammy combo will ever sound as haunting and languid.

The Duo Jet comes equipped with two Seymour Duncan-made single-coil pickups that emulate the original “DynaSonics,” made by pickup pioneer Harry DeArmond and Rowe Industries in Ohio in the ‘50s. Harrison likely was attracted to the Duo Jet for its use by early rock and rollers like Cliff Gallup (of Gene Vincent’s band), and the signature model is capable of reproducing those characteristics of early rock music: a warm distortion that’s not overly hot.

Whether you’re a Beatles nut or Gretsch nut (there are plenty of both, for sure), or just want a kickass old school rock and roll guitar, you can’t go wrong with the Duo Jet.