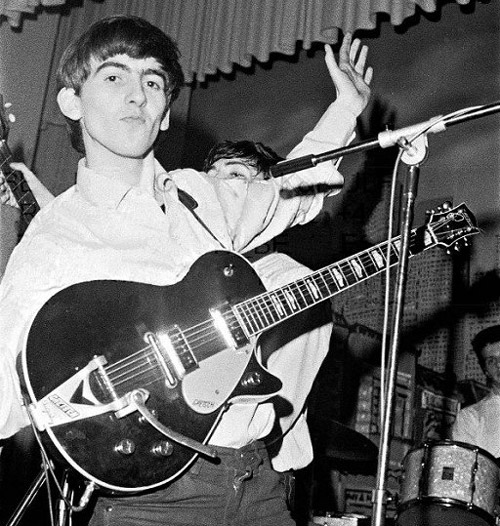 The Gretsch Custom Shop U.S.A. has recently announced a new George Harrison “Tribute” Duo Jet guitar, which will be limited to only 60 models. The guitar is built to replicate Harrison’s original 1957 all-black 6128 Duo Jet.

The original guitar’s provenance seems particularly mundane compared with the important part the instrument would play in musical history. Harrison is said to have seen the guitar advertised in a Liverpool newspaper in 1961 and purchased the instrument from a cab driver and former merchant seaman named Ivan Hayward, who had bought the guitar in New York a few years earlier. The sale for the instrument in 1961? £90. Though the hard-up Harrison could only muster £70 and wrote Hayward an IOU for £20, according to a press release.

The guitar was used by Harrison from roughly 1961 to 1963 and became his main guitar, replacing a Futurama model he’d played up until then. The guitar is particularly significant for its use in 1962 at the Star-Club in Hamburg, as well as gigs at Liverpool’s Cavern Club. Harrison’s Duo Jet was featured prominently as well on the Beatles first LP, Please Please Me, including on the title track and songs like “Love Me Do” and “Twist And Shout.”

Harrison most likely was familiar with the Gretsch brand from rockabilly guitarists like Eddie Cochran and Cliff Gallup. Gallup was the main guitar slinger in Gene Vincent’s band, The Blue Caps, and also proved a strong influence on early rock and roll guitarists like Keith Richards.

While the Duo Jet was not the guitar that famously appeared with Harrison on the Beatles 1964 Ed Sullivan performance – that distinction would go to the double cutaway Country Gentleman, which, along with the Tennessean model, had largely replaced the Duo Jet by this point on stage and in the studio – Harrison was particularly fond of the guitar.