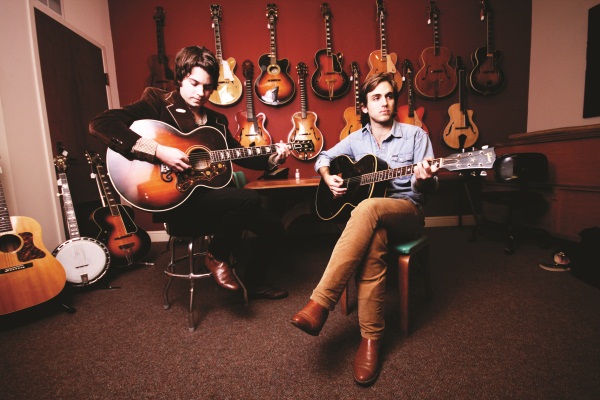 Situated amid the honky-tonks of Nashville’s lower Broadway is Gruhn Guitars, a legendary shop that boasts one of the best collections of new and vintage instruments in the Western world.  American Songwriter, along with country-folk singer Andrew Combs and guitarist Jeremy Fetzer, stopped by recently and had privileged access to the second floor, a province usually reserved for pickers like Vince Gill and Steve Earle. There, we watched owner George Gruhn pick on a historic Gibson 1924 F-5 “Lloyd Loar” Mandolin and a 1939 Martin D-45, a $185,000 beauty that sounded as loud as a cannon. We also sampled a few incredible guitars, including models from some of the best American boutique manufacturers working today. – CAINE O’REAR

Click here to view more photos from the shoot.

On the cover of Bob Dylan’s Nashville Skyline, the elusive songwriter tips his hat from behind the curves of a Gibson J-200, a gift from George Harrison. Gibson’s famous “Jumbo” flattop came into being as the Super Jumbo in 1937, the brainchild of country and western singer Ray Whitley. The Jumbo then had a sixteen-year run as the SJ-200, with the number in its title – like other Gibsons from the J-45 to the ES-175 – indicating its price. Gruhn’s 1948 sunburst SJ-200 comes just one year after Gibson made the switch from rosewood to maple for the back and sides. The vintage model has been re-fretted and outfitted with new tuners, but still bears the famous original “mustache” bridge. The Gibson Jumbo in all its incarnations (it became the J-200 officially in 1955) has been a player’s favorite over the years, with a starring role in the songwriting and recordings of musicians like Jimmy Page, Pete Townshend, and George Harrison. That’s a J-200 ringing out on Abbey Road’s “Here Comes The Sun.” “I say, it’s all right,” indeed. – DAVIS INMAN

In the ‘50s, singing and guitar-strumming duo The Everly Brothers helped bring the Gibson J-200 to broader view in popular music. In 1962, Gibson approached the brothers about making a signature model, which they dubbed “The Everly Brothers Flattop.” Modeled on a J-185 (a slightly smaller spin on the J-200), the new guitar had distinguishing characteristics like a black finish and a huge double pick-guard. According to Gibson, only 488 Everly models were made from 1962 to 1971. At some point in the ‘70s, producer Brian Ahern picked one up, which is now in the catalog of Gruhn Guitars. Gruhn dates Ahern’s Everly axe to 1966 (though the serial number is no longer visible). Ahern used the guitar on many famous Emmylou Harris recordings, such as “Born To Run” off 1981’s Cimarron. (Ahern and Harris were married, but divorced in 1984.) The guitar’s mustache bridge has been replaced with a standard bridge (similar to the ones used on J-45s and 50s) but you’ll still be hard-pressed to find a richer piece of history. – D.I. 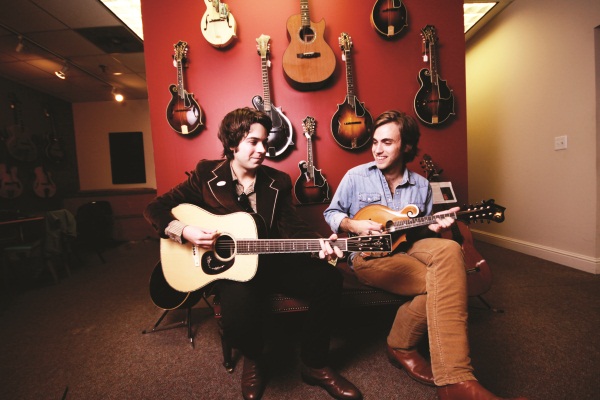 It’s easy to see why Bourgeois is the preferred choice of artists like Ray LaMontagne and Bob Minner (Tim McGraw). All of their guitars are handcrafted, and accorded special care and attention by Dana Bourgeois, who started the company in Lewiston, Maine, back in 2000.

While browsing the inventory at Gruhn, our eyes settled on a gorgeous Bourgeois dreadnought: the 2009 Ricky Skaggs RS-42 Limited Edition. The guitar sports an Adirondack spruce top with Brazilian rosewood back and sides, and abalone rosette.

“This is some of the finest Brazilian I’ve ever seen,” Skaggs said of the guitar. “It looks over 60 years old. It looks like something you’d see in a really old guitar.”

Skaggs had been playing Bourgeois models for 10 years before the company made this signature model. This is a great instrument for a serious bluegrass picker. But Bourgeois only made ten of these guitars, so if you want one, you better act fast. “I wanted something that showcased his creativity,” Skaggs said. “Just seeing this thing, it’s hard to see how pretty it is.” – C.O.

Australian instrument builder Steve Gilchrist is recognized as a master, especially for his impeccable mandolins. Dave Johnson from Gruhn Guitars compares Gilchrist to John Monteleone (whose guitars are on display at the Metropolitan Museum of Art). “He’s a super, super tight builder,” says Johnson of Gilchrist. “You cannot find a mistake on it.” Gilchrist has had a close association with Gruhn Guitars since the ’80s, when he briefly lived in the U.S. and even worked at Gruhn’s. And he still flies to Nashville every year. “We always know when he arrives because there are big wooden pallets [at Gruhn’s] – the labor of his year’s worth of work.” The Gilchrist Model 4 Junior mandolin has a red spruce top and sugar maple back and sides. Steve Earle considers Gilchrist one of the best builders in the world. The last time Gilchrist was at Gruhn’s, Earle came by and picked up one of his new archtop guitars. Still not impressed? Perhaps the most amazing thing about Gilchrist is he only has vision in one eye. – D.I. 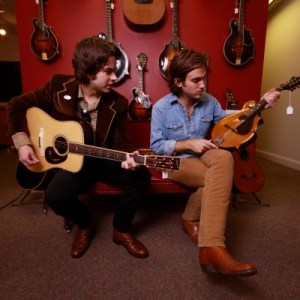 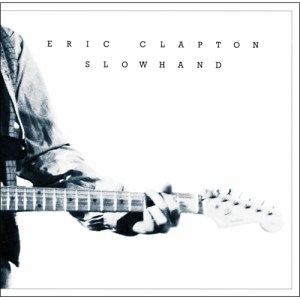