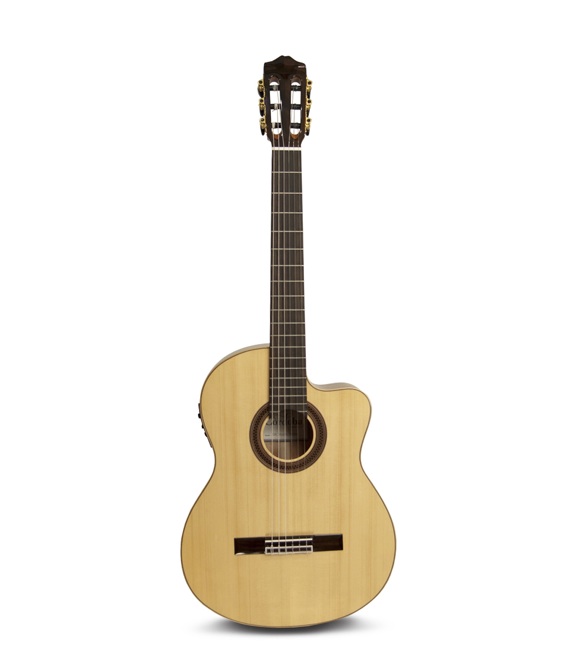 Classical and flamenco music is the usually the first thing that jumps to mind when looking at a nylon string guitar. Cordoba’s GK Studio Negra is one of the crossover instruments the company produces to help buck that trend. While it can be used for those more traditional styles, it has features that make the instrument applicable for more contemporary styles as well.

The GK Studio Negra is basically constructed in the flamenco tradition with a shallow neck angle and a lower bridge, so the strings are closer to the top of the guitar. This allows the traditional flamenco player to use their right hand fingers to tap the top of the guitar providing the distinctive percussive effect this style of music is known for. A clear plastic golpeador, or tap plate, protects the top from fingernail scratches. For the more conventional guitarist this feature could also serve as a pickguard.

(As far as playing a nylon string guitar with a pick, there is a saying: If you rob a bank of a million dollars and get away with, do you know what that makes you? A millionaire.)

The ultra-lightweight GK Studio Negra has a solid spruce top with Indian Rosewood back and sides, bridge, and fingerboard. The thin, truss rod re-enforced mahogany neck is ever so slightly narrowed at the nut from conventional classical widths for a more comfortable feel for those transitioning from a steel-string instrument. The neck joins the body at the 12th fret as per traditional specs, but the cutaway body allows access to the higher notes. (Some of Cordoba’s Fusion series of guitars offer a 14-fret neck, with a even narrower nut width with a curved radius for those seeking even more of a steel string feel.)

Acoustically, the GK Studio Negra has a clear, distinct sound that responds evenly regardless of where the right hand picks. Beautiful lute-like tones are easily achieved by playing closer to the bridge. Each string can be heard individually even when the guitar is strummed, and single note lines really stand out. Just about anything played fingerstyle on this guitar sounds classy and elegant.

A Fishman Presys Blend pre-amp is mounted on the side rim of the guitar, with the pickup hidden under the saddle. Even without the preamp’s microphone blended into the mix, the electronics provided excellent usable tones. When the mic is blended in, a nice “air” effect is added to the sound. This subtlety may be lost in band situations, but is a nice addition for solo settings.

With its traditional looks, the GK Studio Negra would look perfectly at home in a master class, fronting a chamber orchestra or being played in a church as the bride walks down the aisle. But, with its slightly narrower neck, cutaway, and on-board electronics, singer-songwriters and guitarists looking to diversify their sound would find themselves equally at home using the guitar in more modern situations.

Watch a video review of the GK Studio below: