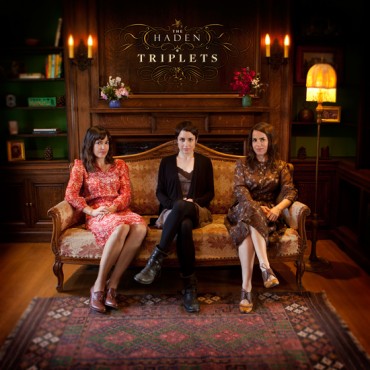 The short liner notes for the Haden Triplets album say they recorded these traditional folk/mountain/country songs “to help keep them alive.” But the lack of detailed song information/production credits doesn’t help much with giving the music recognition; the source of just one of the 13 tracks is identified – Bill Monroe’s “Voice From On High.”

Obviously, you can use the Internet to track down the missing information (or, if you’re a journalist, a publicist). But considering this is a Ry Cooder production released through Jack White’s label, it’s curious more effort at outreach and education about the songs wasn’t made. After all, they’re musicologists as well as musicians.

The Haden Triplets are Tanya, Rachel and Petra, the L.A.-based daughters of the great jazz bassist Charlie Haden. Rachel and Petra have been in That Dog. Petra also has done a number of amazingly creative solo projects, like last year’s Petra Goes To The Movies, where she both vocalizes the instrumental parts of film scores and sings some silver-screen classics, and 2005’s Petra Haden Sings the Who Sell Out. (Tanya, too, has been active in music as well as being married to Jack Black.)

On the surface, it doesn’t seem they’d have much affinity for the rural-Americana songs of Monroe, the Carter Family, Kitty Wells, the Louvin Brothers and the Stanley Brothers. But their father’s parents used to perform old country songs on the radio in Missouri, so it is in their blood.

But is it in their voices? The three sisters have very similar voices that emphasize straightforward clarity over any eccentricities. When they sing together, as they do on this record, the effect is closer to unison singing than close-harmony.

The album starts well with Webb Pierce’s heart-rending ballad “Slowly” and the Carter Family’s wise, down-home “Single Girl, Married Girl.” But with too much unison singing, the sound starts to get bland over the course of a lot of individually agreeable songs. One wishes for more close-harmony singing, where the small differences between otherwise-supportive voices yield wondrous distinctiveness. (The Everly Brothers are a good example of that.)

And occasionally, the combined singing here has a pinched effect, as on parts of “Voice From on High” and Kitty Wells’ “Making Believe” when high notes are held.

Fortunately, the Hadens do solo on enough songs to focus listener attention. The liner notes don’t list who takes lead on what – the three apparently take turns. There is an outstandingly sensitive, caressingly mournful lead-vocal interpretation of Nick Lowe’s contemporary “Raining Raining” ballad that gains strength when the others join in on the “rain, rain, raining” refrain. There’s also lovely violin accompaniment, presumably by Petra.

And “Billy Bee,” a short and clever children’s folk song that is given adult meaning here, features inventive vocalizing all around. It has an urgently energetic solo while the intimate buzzing in the background sounds like it could be either voices or acoustic-bass support. When all three sing simultaneously, there’s enough variety in their approaches to stay interesting.

Besides producing, Cooder offers prominent guitar and mandolin work – including stately, twangy, reverberating Duane Eddy-like sounds on the Carter Family’s “Will You Miss Me When I’m Gone?” (which also benefits from male backing vocals) and a vigorous slide on Monroe’s “Memories of Mother and Dad.”

Really, though, overall the Haden Triplets don’t bring enough of anything special to these songs to make the album an overall success. Those short liner notes also say their mothers’ grandparents used to sing them Yiddish songs. Maybe they should try an album of those.