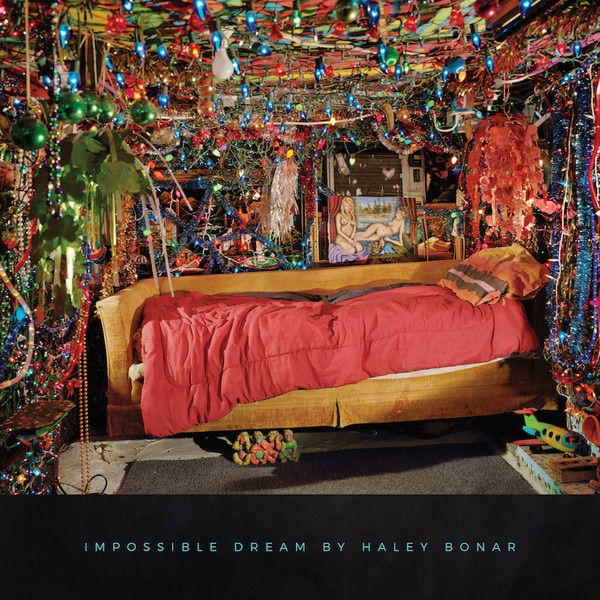 Many artists work in more than one specific sound, but introspective singer-songwriter Haley Bonar has an entirely different name for her more raucous side. In Gramma’s Boyfriend, she unleashes the punky edge of music that lurks inside of her. The side-project allows the indie/folk-rock side to be fully explored in her solo projects. So it’s no surprise that the first single on her sixth album under her own moniker is titled “I Can Change.”

On Impossible Dream Bonar borrows some of the new-wave ’80s stylings from Boyfriend, injecting them into her more personal musings. While it’s unlikely she will abandon the former outlet, the combination of a more driving approach, somewhat like the quieter side of Echo and the Bunnymen mixed with early New Order’s bubbling darkness, proves immensely successful on these 10 tight tracks, none over four minutes, all totaling a conservative half hour.

The lush waves of strumming, echoed guitars hovering over Bonar’s sweetly seductive/innocent vocals on the opening “Hometown,” a melancholy rumination about never being able to leave your roots regardless of how far you travel, introduces a set that generally sticks to that template. There are occasional flashes of spikey, U2 styled reverbed guitar, especially on the driving “Kismet Kill” and the pulsating “Called You Queen.” The latter’s lyrics provide the album with its name over music propelled by swirling keyboards and a sweet/sassy vocal attack that provides an edge to even the quietest tracks.

There’s a sublime sense of mystery and understanding to songs such a “Skynz” where Bonar sings “History is nothing but a memory/ From someone paid to write it,” words, like many on this album, that tend to get overshadowed by the layered, full production and memorable melodies that wash over you. In that sense, Bonar’s voice becomes another instrument in the mix, swirling within music that feels natural, organic and fully formed.  When one of the disc’s finest and most hypnotic tunes, the instantly hummable “Better than Me,” appears nearly hidden away as track #9, you know this is a songwriter who has, over the course of a 15 year, generally under-the-radar career, found her groove and between this and 2014’s Last War, might just now be peaking.

Occasionally the sound can get a bit monochromatic. But co-producer/multi-instrumentalist Jacob Hanson keeps Bonar’s voice — similar to that of Britta Phillips — up front. And these songs are so powerfully melodic, it’s difficult not to get swept into the world of an artist who is more than ready for her time in the spotlight.