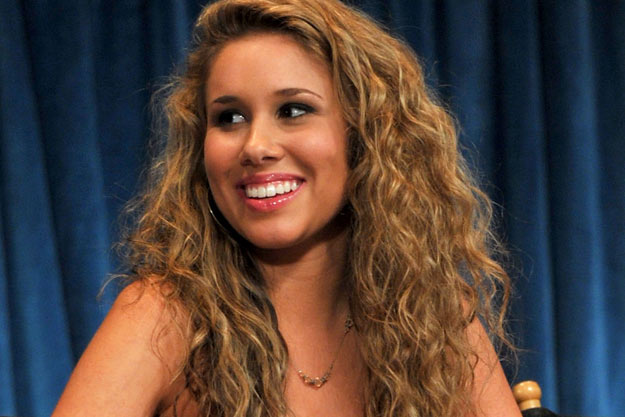 Tonight’s American Idol mixed Lady Gaga and Leiber and Stoller with a dose of pop country from Scotty and Lauren; pretty random, and pretty entertaining. The opening round of songs for the four final contestants was themed around songs that inspire you, so it was bound to get personal.

Haley Reinhart’s rendition of Michael Jackson’s environmentally conscious “Earth Song” was impassioned and technically flawless, and she didn’t even have to add any “jam ons”  or crotch grabs. But two of the three judges crapped all over it.

J. Lo didn’t think the song was a big enough hit to compete against songs like James Durbin’s pick, Journey’s “Don’t Stop Believin’,” which everybody drooled over. Something about the performance awakened Randy’s inner critic. “You needed to be singing more runs at the end,” he complained, and said the final chorus needed to be “a fifth or an octave higher than that.”

Haley was defiant. “I thought it was beautiful the way it was…” Then it was Steven Tyler to the rescue: “Don’t listen to them.” “What do you get from that? ” he added. “They’re both wrong. You sang it, you nailed it, you nailed it with feeling.” Ooh, dissension.

“Boy, I never thought I’d get emo on this show, but that song means a lot to me,” said Hayley, the rough-voiced Diva in training, in a backstage segment, where she stood her ground. “So to have the judges criticize it was weird.”

Continuing with the inspirational theme, future country chart-topper Scotty McCreery donned an acoustic guitar to sing Alan Jackson’s post 9/11 song “Where Were You (When The World Stopped Turning).” “These lyrics  [I’m not sure I can tell you the difference between Iraq and Iran/but I know Jesus and I talk to God…”] mean so much to me as an American,” said Scotty, who choked up in the middle of the song, “and I think they mean a lot to everybody in the country right now.”

“Yo, we got Bin Laden, Dawg!” said Randy. Okay, no he didn’t. “I think it’s the perfect song for this country right now,” is what he actually said. “You’re ready for superstardom, and I hope you make it.” Added J. Lo: “I’m in love with you.”

16-year-old Lauren Alaina sang an inspired “Anyway” by Martina McBride, and dedicated it to tornado victims in the South. “You broke my heart, man,” said Steven Tyler afterwords. “You deliver a song like a blue plate special.”

Round 2 was all about Lady Gaga, who was dressed conservatively in a leather bathing suit, some freaky deaky eye shadow, and two-toned hair. Gaga teamed up with producer Jimmy Iovine to mentor the kids on delivering the works of 50’s and 60’s hit songwriting duo Leiber and Stoller like a scary monster would. The controversy-courting superstar coached Hayley in how to add a little flair to “I Who Have Nothing,” originally sung by Ben E. King. “How do you feel about going a little pyscho?” she counseled. “Give ’em a little crazy.”

Hayley probably did want to go psycho on the judges after the light drubbing she received earlier. But when it was all over, they gave her a standing ovation. “This is why we can’t take it easy on you,” said a fickle J. Lo. “Look what you’re capable of, baby. That was amazing. One of the best performances of the year.”

But will they still love her tomorrow?

The rest of the show was hard to take your eyes off of — the Gaga/Scotty tandem is especially worth watching. Scotty had to kiss his cross after Gaga told him to pretend the microphone was his girlfriend, and shove his tongue down its throat.

In the end, though, it was probably Lauren’s star who shined the brightest, her soulful voice soaring above the competition.

What did you think of the night’s performance? What did you make of Lady Gaga’s advice? Let us know in the comments, Dawg.