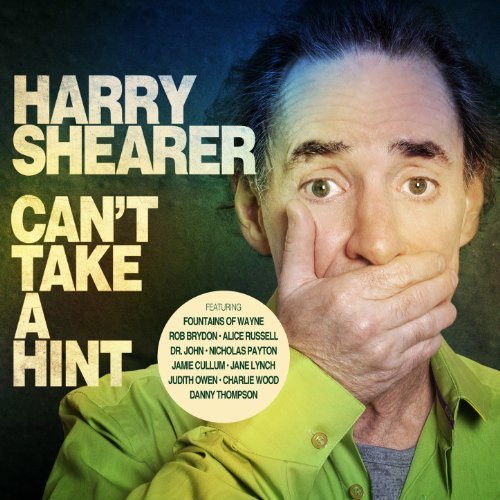 On Can’t Take A Hint, multi-faceted comedian/songwriter Harry Shearer teams up with an impressive array of talents to poke fun at subjects ranging from media mogul Rupert Murdoch to the perils of modern-day air travel.

The album gets off to a great start with “Celebrity Booze Endorser,” in which indie act Fountains of Wayne provide the suitably upbeat musical backing in a tongue in cheek at about aging celebs searching for more profitable ways to market their image: “You can’t live on ringtones and promoting foreign snacks.”

Shearer chooses his targets well, and his barbs are more apt to poke fun rather than arouse wrath. Half the album’s tracks feature Shearer’s vocals, and they’re generally the stronger songs. “Joe the Plumber” neatly skewers the conservative activist, while “Touch My Junk” is the kind of come on you won’t want to be singing when you next pass through airport security. The most searing track, “Deaf Boys,” is a creepy acoustic number about the abuse of young boys by priests, percussively driven by the finger-snaps that transform the men of the cloth into renegade Jets and Sharks.

Other vocals are provided by Dr. John (appropriately enough on “Autumn in New Orleans”), actress Jane Lynch on “Like a Charity,” a withering look at how money donated to charity may (or may not) be spent, and roots rockers Alice Russell and Tommy Malone from the Subdudes on “Trillion Dollar Bargain” — a positive reframing of the money spent on the Iraq war.

The melodies tend to be upbeat, meaning this is an album where you actually have to pay attention to the lyrics. Some of these songs have previously appeared on Shearer’s radio, now podcast program Le Show; Shearer’s fans will be glad he finally decided to have them released.