Celebrity-inspired guitars are everywhere these days, and the Dwight Yoakam Honky Tonk Deuce Signature Artist by Gibson is yet another. In some ways it’s not all that special, but in other ways it succeeds admirably.

The body of the Honky Tonk Deuce has the traditional shape of Gibson’s slope shoulder dreadnought design, with a top made from AA-grade Sitka spruce and back and sides of Indian rosewood. The fingerboard is high-grade rosewood with a snake eyes dice inlay at the 12th fret, ala Epiphone’s Elitist Dwight Yoakam “Dwight Trash” Casino electric hollowbody. In terms of playability the guitar works just fine and is well-balanced, but might be too upper-midrangy and ringy for the taste of some players. If nothing else, though, there’s certainly no problem with this guitar in terms of keeping up with everyone else in the room in terms of volume and the ability to cut through. The Deuce has an L.R. Baggs Element Active Acoustic Pickup along with 15:1 Gotoh vintage keystone-style nickel tuners, a J-50 shape tortoise pickguard, and the legendary Gibson crown logo on the peghead.

The one area where Gibson definitely hits a grand slam with this axe, though, is in its overall aura. The company managed to engineer a guitar that feels like Dwight Yoakam. It’s as if they somehow managed to put some of the essence of the man himself in this guitar. It’s almost spooky. You can picture him, or somebody in a Manuel jacket and a hat that covers his eyes, shimmying around the stage playing this guitar. So it’s a good choice for the player who is really into the Church of Dwight when it comes to vibe and stage presence. Having said that, if you don’t happen to be a Dwight fan, you might think twice before shelling out over three grand for this guitar (list price is $4,099.00, but can be had for about 25 percent less than that), because for that kind of money there might be another guitar out there that is more suitable for more applications. But if for no other reason than to recognize the fine folks at Gibson for their obvious hard work on this one, it definitely merits a test drive. – RICK MOORE 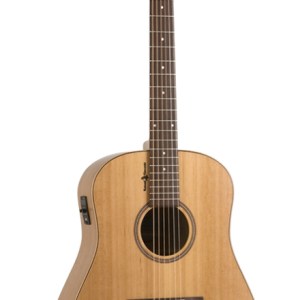