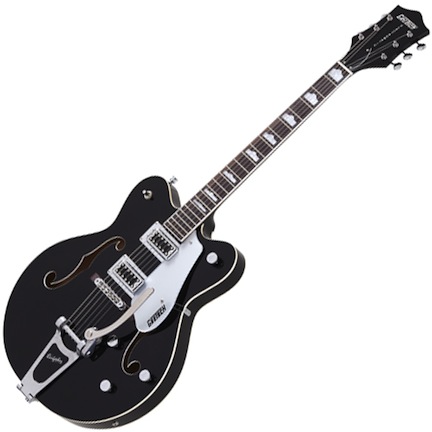 The Gretsch name has been a mainstay in guitars for more than half a century, thanks largely to the late Chet Atkins, a Gretsch player who will go down in history as one of the greatest guitarists ever. Other players in the 1950s like Eddie Cochran and Duane Eddy also played Gretsches, and British players like George Harrison, Brian Jones and Pete Townshend followed suit. But with the notable exception of Brian Setzer, Gretsch guitars in the hands of groundbreaking stars became scarce in the era of Les Pauls and Fenders and everything after.

The Gretsch name is still around, though, and the company continues to develop new products. One of these is the Gretsch G5422TDC Electromatic Hollow Body. The guitar is a double-cutaway with f-holes and Filter’Tron dual-coil pickups, which utilize a large ¼” alnico magnet (twice as large as a standard PAF magnet) and larger pole screws, which is supposed to result in a thicker tone. We tested a black G5422TDC at Nashville’s Myrmidon Studios through a modified Fender Princeton amp with a 12” Mesa Boogie speaker.

Spending quite a bit of time using different settings on the amp with different pickup combinations, we were pretty pleased with the sound, though it was evident that a player would have to work with the blending of the pickups and master volume, and his or her particular amp, to find their own sweet spot, as the pickups seemed maybe a little too thick at times. The guitar’s Bigsby tremolo, a brand that has been alternately loved and reviled by the guitar community for decades, worked just fine when used for the things it’s best-known for, namely, adding the vibrato shimmer to single notes and chords and giving a more radical bite to chord solos ala Setzer. It always came back in tune, surprising since this was a just-out-of-the-box axe.

The knobs on the G5422TDC can be a little confusing at first for someone who isn’t used to the Gretsch knob configuration of the master volume on the lower left of the body, with volume controls for the two pickups and the tone control knob on the lower right and the three-position switch on the upper left. But once a player has his or her settings pretty much dialed in, the master volume shouldn’t have to be adjusted very often. The guitar has soundpost bracing, a maple neck, bound rosewood fingerboard with 22 medium jumbo frets and hump-block pearloid inlays. The guitar has vintage-style open-back tuners, chrome-plated hardware, a silver plexi pickguard and a rosewood-based Adjusto-Matic bridge.

The G5422TDC lists for $1,250 although they’re available for a street price of several hundred dollars less. This is a decent enough guitar, but is especially good for someone who just wants to add a Gretsch to their collection but has been scared off by the price tag of, say, a new White Falcon at $3,000+. The guitar is available in black, red and walnut satin. – RICK MOORE 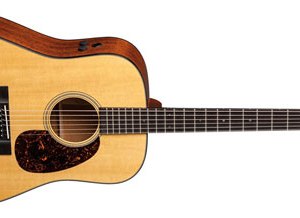