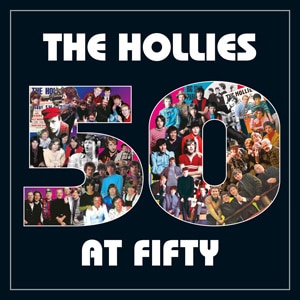 The Hollies: 50 At Fifty Technically the Hollies’ debut single was released in 1963. But, since their first album didn’t drop until ’64, it’s close enough to call 2014 the UK pop combo’s 50th anniversary. The Hollies, named after Buddy Holly, enjoyed a remarkably long run even if they haven’t troubled the US charts much in a few decades. They surely deserve a full blown, lavish box set on longevity alone. Unfortunately, this isn’t it.

As the compilation’s title implies, the three discs contain 50 songs tracking the group’s career in chronological order. But there is no care or even much thought put into it beyond that. Since the Hollies were signed to a few different labels, predominantly Epic and Imperial in the States, this is one of the few sets that features cross-licensing covering their entire career. The band’s three part harmonies were right up there with the Beatles –they even recorded at Abbey Road and covered Harrison’s “If I Needed Someone” –and only a lack of consistently strong originals and the usual vagaries of the music business kept them from attaining the kind of adulation afforded the Fab Four, especially in the States. Lead vocalist Allen Clarke had one of the most distinctive voices in pop but as the Hollies moved into the 80s, they shifted from frisky R&B covers (“Just One Look”), to swamp rock (“Long Cool Woman (In a Black Dress)” and honeyed psychedelic pop (“King Midas in Reverse”) into a slick if well-crafted adult contemporary sound best exemplified by the soaring “The Air That I Breathe.”

While fans can quibble about omissions (no “Long Dark Road”?), especially when the platters don’t max out their playing time, all the group’s major hits are included in nicely remastered sound. A new 2014 song, the schlocky “Skylarks” closes the program and justifies the 50 year timespan. However the presentation is lackluster and cheap, bordering on disrespectful. A hastily slapped together 12 page booklet with no essays– a major omission for a historical package– a few mediocre photos and little more than a list of songwriters is all the compilers could muster. The members of the group aren’t even mentioned; side musicians, chart status and when the songs were released are all MIA.

Certainly the Hollies warrant a better, more thorough collection. There are plenty of other packages of Hollies music available that include the majority of these tracks not to mention far better annotation and presentation. Newcomers to this timeless music should stick with the 30th Anniversary Collection along with The Epic Anthology; you’ll get terrific liner notes and more songs too. This then remains a missed opportunity, one that barely pays tribute to one of the UK’s finest and most talented acts.