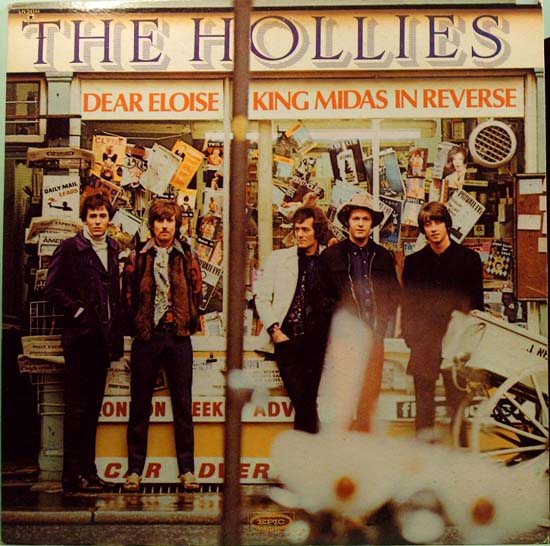 The Hollies, “King Midas In Reverse” There are many reasons why a single might fail, the most obvious being that the song is lousy. That’s certainly not the case with “King Midas In Reverse,” a September 1967 offering by The Hollies. Before considering the song’s quality though, first regard the stats: Prior to the track’s release, the band had scored Top 10 hits in their native England with four straight songs and 12 of the previous 13. “King Midas In Reverse” only climbed to #18 in the UK. It fared even worse in the U.S., staggering to #51 despite the band having hit Billboard’s Top 10 three times in the previous two years.

Yet one listen today makes clear that the song is a dark masterpiece, marrying orchestral pop pomp to some intriguingly sour sentiment. So why did it struggle on the charts? Maybe it was too downcast. After all, the song’s release coincided with the tail end of the so-called Summer of Love. Blissed-out audiences might not have wanted to hear about a title character that is a walking disaster.

It certainly wasn’t a typical release for The Hollies, who were known for cheery ditties like “Carrie Anne” and “On A Carousel.” Graham Nash, who penned the song for the band, caused the drastic change in mood by reflecting upon some personal doldrums, as he told Richmond Style Weekly in 2014. “It’s an autobiographical song,” he remembered. “My world was turning to shit at that point. I was on top of the world, we had 16 or 17 top ten hits, but I was feeling shitty. We made a great record of that song but it only got into the top 30, and the Hollies were always expecting their songs to go into the top 10. So they started to not trust me and not record my songs, ‘’Marakesh Express’’ being one of them. So I wasn’t feeling that great about my life. It was all turning to shit, it wasn’t turning to gold, it was turning to rust.”

So Nash messed with the story of Midas and imagined someone whose touch caused mayhem and destruction. Nash and Allan Clarke’s harmonies, so often utilized to evoke joy and possibility, here dive deep into nastiness of this character, whose lone saving grace is that he knows the negative impact he makes on the world and attempts to warn everyone away: “I’ll break you and destroy you/ Given time.”

This Bizarro Midas also damages his romantic entanglements, so he reasons with his broken-hearted lover: “So even though I’d lose you/ You’d be better off by far.” Nash toys with the song’s perspective, using the first person in the verses and the third person in the refrains and bridge. By doing this, he earns some pity for this train wreck of a human being, who seems to be suffering right along with his victims: “Nothing he can do is right/ He’d even like to sleep at night/ But he can’t.”

In the final verse, the King is once again telling his own story, and he meekly calls out for help: “I wish someone would find me/ And help me gain control/ Before I lose my reason/ And my soul.” Maybe the timing wasn’t right for The Hollies to take such a fearless trip to the dark side of the pop world. Or maybe the title character rubbed off on the song. Whatever the reason for the commercial failure, the morose majesty of “King Midas In Reverse” still reigns today.